Two falls prevent the resurrection of Marc Márquez: "It was not my fault"

Marc Márquez became Marc Márquez again and, suddenly, everything went back to two years ago, when he had not crushed his right shoulder and the world had not suffered one ... 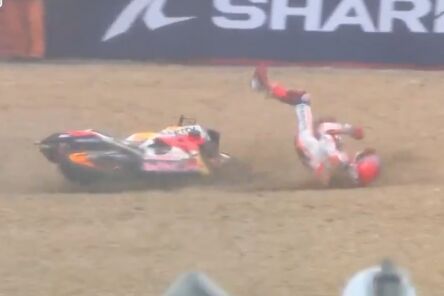 again and, suddenly, everything went back to two years ago, when he had not crushed his right shoulder and the world had not suffered a pandemic. Coronavirus, what coronavirus? As when we lived without masks, the MotoGP World Championship had a new owner, the victory was already decided, it was missing to know how he would celebrate it. Marc Márquez was Marc Márquez again this Sunday at Le Mans and even calculations could be made: with 14 races remaining, his seventh title was more than possible.

In the rain, he rode his Honda as if the sky were clear blue. The one that fell four drops went from sixth to second, changed bikes in an instant - others, like Fabio Quartararo, even made the wrong garage - and left without looking back towards the victory. More than his return, it was his resurrection. One, two, three seconds ... for three laps the memories accumulated. He was the Marquez of the 10 wins in a row. He was the Márquez who despaired of Valentino Rossi. He was the unbeatable, unbeatable Márquez.

His Honda expelled him in the worst of ways and he even hit his right shoulder again, this time without consequences.

The victory vanished while it was still raining and gave way to the battle that will mark this season: the Ducati of

against the talent of

But Márquez's blow confirmed that this year he is not playing, that his recovery will be slower than expected, that the forecasts should put him aside until 2022. And it may not be his fault.

At the end of the race, in statements to Sky, Márquez pointed to his garage, to that machine that made him a six-time champion and that now is strange to him.

"I'm not the only one who falls on this bike so I don't think the crash was my fault. I was fast and there was an improvement compared to Jerez and Portimao. Unfortunately, I ended up with zero points. There is work to be done because this is not the best. that we want, "said the Spaniard after several gestures of despair in front of his mechanics.

Because, in fact, his comeback didn't last just three laps.

After the first accident, Márquez got back on his bike and was the fastest, even faster than Miller, finally the winner.

He went from eighteenth to eleventh when the checkered flag was still forever.

At the pace he was running, he could have flirted with the podium or at least celebrated the best position since his return.

But again the Honda slipped again, now sweetly, and he no longer insisted.

Marc Márquez became Márquez again and two falls brought him back to the present.

His right shoulder is still weak and the coronavirus still causes pain around the world, to show the Le Mans stands, still empty.

The water, which slows down the races and does not allow the bike to fall, only offered him a mirage.

This Sunday, suddenly, everything went back to two years ago, but what a lie.

MotoGPMarc Márquez will start sixth in Portimao: Can he win on his return?

MotoGP The 'X-file' of Fabio Quartararo: "I don't know what happened, I have run out of strength"