Shabab Al-Ahly seeks "a record" ... and victory to save the season with "the most expensive cups"

Al-Ahly youth renews the dialogue tonight with Al-Nasr in the second final of this season, after the Arab Gulf Cup, and for the second time in a week after the confrontation at the end of the Arab Gulf League, and the occasion today will be the struggle for the title of the most expensive cup, the President's Cup, at Hazaa Bin Zayed Stadium in AD 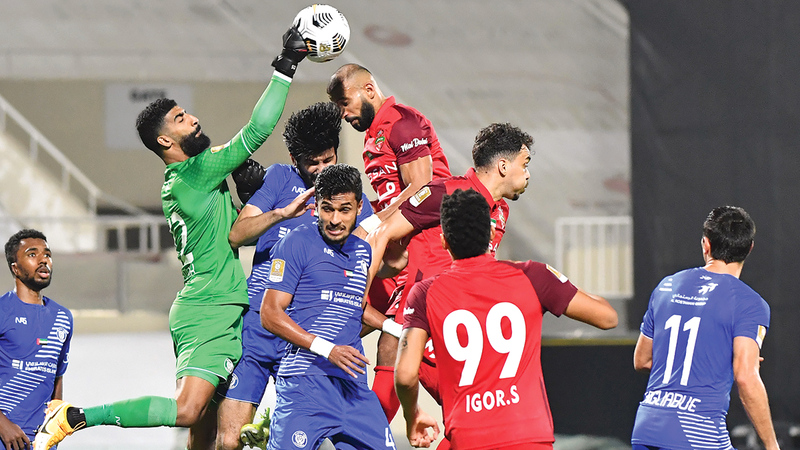 The first match to witness a crowd of 14 months

Shabab Al-Ahly seeks "a record" ... and victory to save the season with "the most expensive cups"

The conflict is renewed between Al-Ahly's youth and Al-Nasr, in the absence of an influential "Brigadier".

The youth of Al-Ahly renew the dialogue tonight with Al-Nasr in the second final of this season, after the Arab Gulf Cup, and for the second time in a week after the confrontation at the end of the Arab Gulf League, and the occasion today will be the struggle for the title of the most expensive cup, the President's Cup, at the Hazza Bin Zayed Stadium in the city Al-Ain at 7:35 pm.

The two teams met this season on three occasions, and the victory in all of them was in favor of Shabab Al-Ahly, who won back and forth in the Arab Gulf League with a score of 1/0 and 3/2, and also won the Arab Gulf Cup final with a penalty shootout. 5/4, after the end of the original time with a draw without goals.

Al-Ahly youth seeks to break a new record by winning the tenth title in the cup, while Al-Nasr hopes to save its season with the most expensive cups, and to achieve the fifth title in the history of the competition.

The penalty shootout scene may be repeated in today's final, after the FIFA Competitions Committee decided not to play extra time, if the original time ended in a draw.

The match will witness a public presence for the first time this season in 14 months, only for those who have received the "Covid 19" vaccination, and the letter "E" appears through the application of the fortress, as well as the one who has obtained a star from clinical trials, and also with highlighting the negative result of the examination "BCR" More than 48 hours, with other requirements.

Shabab Al-Ahly climbed to the final, after defeating Hatta in the round of 16, 3-0, and the Emirates team in the quarter-finals 2-0, and far from Bani Yas in the semi-final with a goal without a response.

Al-Nasr succeeded in eliminating Al-Wahda from the final eighth of the final with a penalty shootout 4/2, after a goalless draw, and easily beat Ajman 2-0 in the quarter-finals, and then achieved a big victory over Sharjah in the semi-finals with three goals.

The two teams share the cleanliness of the nets, as neither of them has met any goal in their career in the competition.

Al-Nassr enters the meeting amid technical difficulties represented in the absence of four of its important players, led by two midfielders, Touzi and Tariq Ahmed, left winger Ryan Mendes, and defender Globert Lima, for their second yellow card in the semi-final against Sharjah.

Al-Nassr, led by its coach, Argentine Ramon Diaz, hopes to overcome these difficulties and save the season with an important championship, after he failed to reserve a seat in the "Asian Champions" due to Al-Ahly youth, who sent him to fifth place in the league standings, after he beat him in the 26th round. .

On the other hand, Al-Ahly youth enter the meeting in a much better position than Al-Nasr, due to the completion of their ranks and the preference for the results they gathered this season, and under the leadership of his coach Mahdi Ali, who achieved remarkable success with the team since he took over his training in mid-December.

Shabab Al-Ahly, the "title holder", hopes to win a historic triple this season, after they won the Super Cup at the expense of Sharjah, and the victory in the Arabian Gulf Cup.

No coach has ever achieved three championships in one season, except for Al-Ahly's youth coach, Roman Ulario Cosmen, when he won the League, the Arabian Gulf Cup and the Super Cup 2013-2014 season.

Abdullah Al Junaibi: The presence of the audience adds a lot of value to the final

He confirmed in a press statement that the final today between Al-Ahly Youth and Al-Nasr is witnessing an event for the first time in more than a year, which is the public presence that has been absent during the last period, due to the precautionary measures related to the Corona virus.

He continued: "The audience's attendance increases the sweetness of the match, even if by a specific percentage, which is a step that will add a lot of value to this final, especially as it is the second that will bring together victory and Al-Ahly youth this season."

Attendance will not exceed 30% of the stadium's capacity.

- Allowing those who have obtained the Corona vaccination to attend, and to show the letter E through the Al-Hisn application.

- Those who receive a star from clinical trials.

A thermal examination of all attendees, and a mask should be worn at all times.

A negative PCR result that does not exceed 48 hours from the date of the match.

Spacing my body and not leaving the seats unless necessary.

Banned entry for those under 16 years old.

• Shabab Al-Ahly defeated Al-Nassr in the three matches this season, in the home and away league, and the final of the Arabian Gulf Cup.