Erik Källgren in tears after the gold: "Without them I would never have stood here today"

When Växjö's goalkeeper star Viktor Fasth was injured, Erik Källgren had to step in and take over. He took over the responsibility with bravura and now that he has lifted the Swedish Championship trophy, he pays tribute to his parents. - They have done everything for me and believed in me, says a teary-eyed Källgren to SVT Sport. 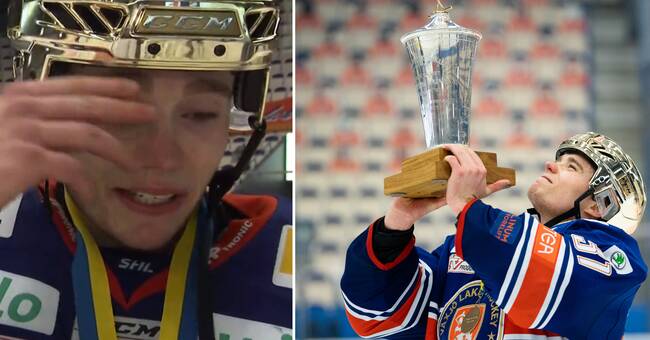 Eight minutes into the first semifinal, Viktor Fasth was injured and Erik Källgren, who was to be the second goalkeeper in the playoffs, had to take over.

He has since played all matches for Växjö and done really well.

On Monday night, he and his teammates celebrated Växjö's third Swedish Championship gold.

After lifting the trophy and winning the gold medal, he was clearly taken by the moment.

- It is a milestone in my career.

This will take a while to melt, he says as he wipes his tears.

"They have never doubted"

- I have my family and my girlfriend who always support.

Without them, I would never have sat here today, says the 24-year-old.

The 24-year-old, who has Lidingö HC as his mother club, pays tribute to his parents.

- It is impossible to describe.

They have done everything for me.

They have believed in me and let me chase my dream and never doubted that I would do this, he says.