Medvedeva's challenge to bloggers, a photo of Valieva with Chagin and a response to Gallyamov from Malcolm: what is being discussed in the world of figure skating

Elizaveta Tuktamysheva listed the qualities of an ideal man, and Alexandra Boykova confessed her love for poetry. Sofya Samodurova took a ride on an extreme attraction in Dubai, and Kamila Valieva and Maya Khromykh met with multiple Dakar winner Vladimir Chagin. Evgenia Medvedeva challenged the TikTok stars, and Alexander Gallyamov demonstrated his football freestyle skills on ice. What happens in the world of figure skating in the offseason - in the material RT. 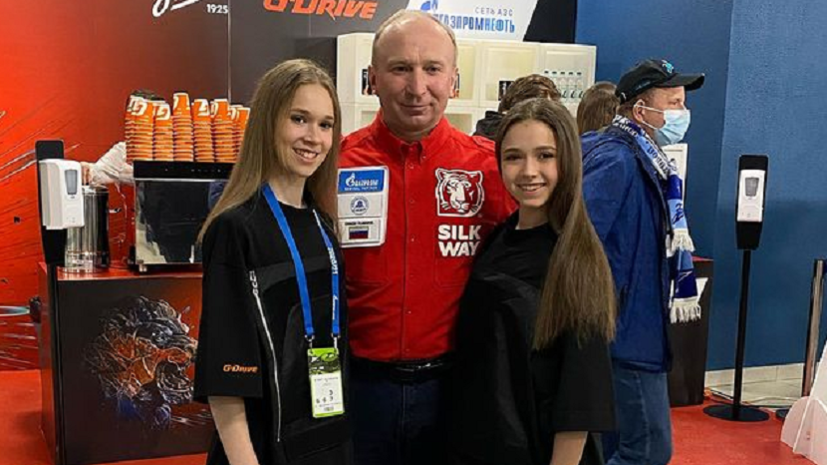 Attitude to dating Tuktamysheva and love of Boykova's poetry

The season in figure skating came to an end, and many athletes went on a well-deserved vacation.

So, the 2019 European champion Sofya Samodurova went to Dubai with her family.

However, her vacation was not limited to spending time on the beach.

A student of Alexei Mishin took a ride on one of the most popular extreme attractions in the city - a kilometer zipline, the start of which is located at 170 meters.

A colleague of Samodurova in the group Mishin Elizaveta Tuktamysheva chose a different direction - the Maldives.

The 2015 World Champion has already boasted spectacular photographs from the shores of the Indian Ocean.

Some time ago, she admitted that her whole current life consists exclusively of figure skating, so it is extremely rare to relax or even go on a date.

“I met with Andrey Lazukin.

And it all started with friendship, and dating was already irrelevant when we started dating.

There was no candy-bouquet period - and I am calm about this, more important is how you feel next to a person.

I have no memorable dates.

It's more pleasant for me to just go to a restaurant, sit, chat - is this considered a date? ”Tuktamysheva admitted in an interview with Izvestia.

In addition, the 2021 planetary championship silver medalist revealed what traits she prefers in men.

“I appreciate the sense of humor, intelligence and kindness.

These qualities are very important to me, ”she added.

In addition to Tuktamysheva, the dancing pair of Alexander Stepanov - Ivan Bukin went to the Maldives.

And the bronze medalist of the 2021 World Cup, Alexandra Trusova, boasted seascapes on Instagram.

However, not everyone has had time to go on vacation yet.

The sports duet of Alexander Boykov - Dmitry Kozlovsky continues to undergo staging camps at the base in Novogorsk.

During the break between workouts, the partner talked to the fans on Instagram and answered their questions.

She admitted that during the rental she could think about a variety of things not related to figure skating, described the best, in her opinion, route in St. Petersburg, and named Max Korzh, Adele and Rihanna among her favorite musicians.

It is very difficult to make some kind of top, but I will try.

The Brothers Karamazov, Oblomov, War and Peace, or Clean Monday.

I was madly waiting for this question, because I love poetry even more, probably, than prose.

So: I adore all acmeists, but Anna Akhmatova is in my heart forever, ”said Boykova.

Answer to Gallyamov from Malcolm and a walk in St. Petersburg Valieva and Khromykh

The representative of another sports pair, Allexander Gallyamov, performing with Anastasia Mishina, performed an unusual exercise at one of the trainings.

He skated on the ice while striking a soccer ball.

Some of the social media users joked that the skater had invented a new sport.

Gallyamov has repeatedly said that he loves football very much, and in the Russian championship, following the example of his grandfather, he supports Zenit.

In one of the interviews, the athlete singled out the striker of the Malcolm team, calling him an adornment of the Russian Premier League.

In turn, the Brazilian admitted that he was flattered to hear such a compliment from the skater.

He thanked Gallyamov and wished him to please Russia with his victories as long as possible.

“Have I been to figure skating?

But if the opportunity arises, I will definitely try to go.

I can't imagine myself skating.

What are my skates?

Football players get injured on the field, imagine what will happen if I go out on the ice?

I will definitely fall - there can be no two opinions.

If I rock, I just can't stop, which will be even worse.

So football is better! "

Another fan of Zenit is Tutkamysheva, who trains in St. Petersburg.

She did not stay away from the team's third consecutive championship and congratulated him on Instagram.

Eteri Tutberidze's wards Kamila Valieva and Maya Khromykh had a chance to attend the historic meeting between Zenit and Lokomotiv, which finally approved the blue-white-blue in the rank of champions.

First, the athletes walked around sunny St. Petersburg, and then went to the Gazprom-Arena.

There they danced with the famous blogger Anna Tolstova, took pictures with the seven-time winner of the Dakar rally-marathon in the truck class Vladimir Chagin, and then went up to the stands to watch the match.

“The past day in St. Petersburg passed like an instant,” Valieva shared her impressions.

Two-time world champion Evgenia Medvedeva keeps up with modern trends - she starred in the video of the TikTok stars, united by the XO Team group.

Together they staged an impromptu competition: the skater showed the exercises, and the bloggers tried to repeat them.

Who won: @ evgeniamedvedeva99 or XO?

In the near future, fans will also be able to enjoy the new image of Medvedeva.

She will play Kitty Shtcherbatskaya in the new ice production by Ilya Averbukh - Anna Karenina.

The main roles went to the world champions in ice dancing Oksana Domnina and Maxim Shabalin.

In addition, Roman Kostomarov, Alexander Enbert, Tatiana Totmianina, Maxim Marinin, Alexey Yagudin and others will take part in the play, which is scheduled to premiere in July.

Yagudin's visit to Tarasova and the story of Tutberidze's grandfather

Costumes are an integral part of figure skating.

A properly selected outfit can competently complement the image, and an unsuccessful combination, on the contrary, spoil the impression of the entire program.

This trend was explained by the famous stylist and designer Vladimir Mandrikov, summing up the "fashionable" results of the season. "

“I think black is justified by the very situation in the world.

The more negative, the more people go into dark colors.

The crisis, the virus - all this affects.

If you look at the programs of the season, we did not see very funny music.

Up to the point that Anya Shcherbakova changed the end of the free program to make it more positive.

Everything is related to the situation.

We live in a society, it affects the views, the mood, the atmosphere that is created, ”Sport24 quotes Mandrikov.

In his opinion, Anna Shcherbakova had the most successful costumes this season, and among foreign singles - Ricky Kihira.

Over the course of their careers, many skaters really get closer to their coaches, become part of their families and continue to maintain a warm relationship over the years.

This fact was once again proved by Tatyana Tarasova and Alexey Yagudin.

The ex-skater, together with his wife Tatyana Totmianina and two daughters, came to visit the mentor.

"I love and always wait for you!" - wrote Tarasova.

On May 9, many skaters congratulated their compatriots on Victory Day.

Medvedeva told how her great-grandmother walked on the roofs of houses in Moscow and extinguished bombs, and her great-grandfather reached Berlin and was awarded the Order of the Red Star.

And Tutberidze's fans published information about her grandfather, pilot Patvakan Grigoryan, who went missing in 1941.

“In one of his last letters to his family, he wrote:“ Only cowards die, and among us there are no cowards. ”

In November 1941, a belated postcard came from him, and his family hoped to the last that he was alive.

Eteri Georgievna Tutberidze's mother tried many times to find out how her father died, but to no avail - appeals to the Central Archives of the Ministry of Defense did not lead to anything, ”the message says.