The Mexican 'Canelo' Álvarez beats Saunders before more than 73,000 fans 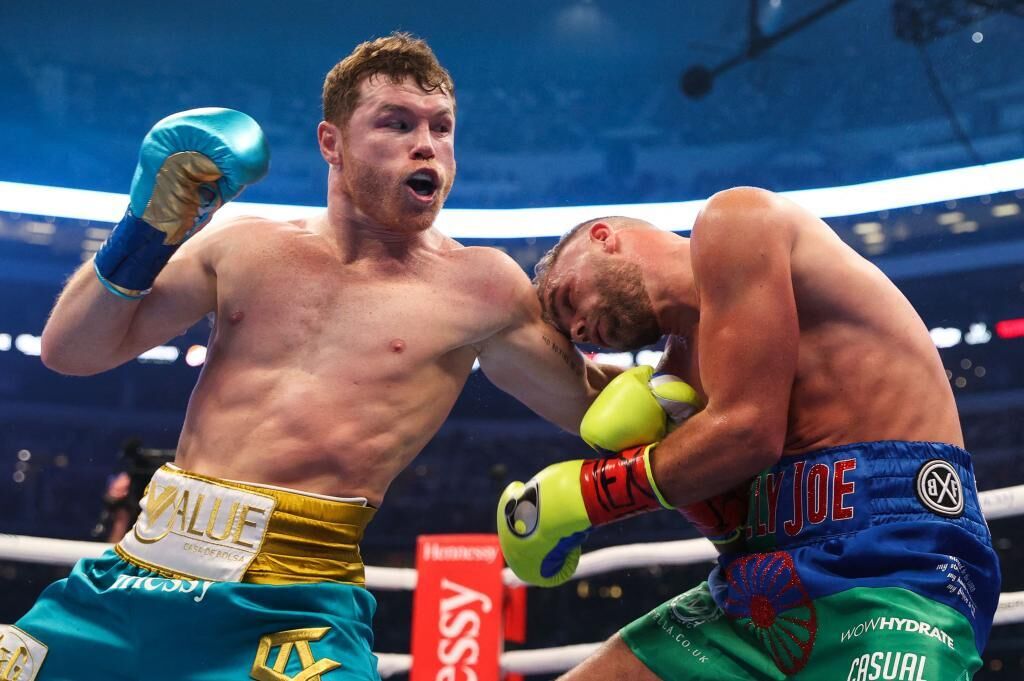 in a super middleweight title unification bout, unleashing the euphoria of more than 73,000 fans in Arlington, Texas.

Both fighters had a more even fight than expected until '

, the great favorite, punished the Briton harshly in the eighth round.

After being examined in the corner,

no longer returned to the ring for the ninth round, unleashing the jubilation of the fans, mostly of Mexican origin.

, fearing a serious injury, did not allow him to continue.

"I knew that the fight was going to start towards the eighth round. But it was not as difficult as I expected, I realize that my preparation was good and I am improving day by day," said

"I knew this was going to happen," he

"I knew he wasn't going to come out anymore because I broke his cheekbone."

The British fighter was immediately taken to a hospital for a possible fracture.

"I couldn't see, I talked to

and he said he couldn't see, he wouldn't let it out," explained promoter Eddie Hearn.

When the fight was stopped, the judges were also giving the Mexican victory with scores of 77-75, 78-74 and 78-74. In his third fight in less than six months,

the super middleweight title of the

, and adds him to his belts from

To be the undisputed champion of the 168-pound (76.2kg) category, the Mexican only has to win the title of the International Boxing Federation (IBF), which is owned by the American

"That's the plan, go for the belt (of Plant). I'm going for it," threatened

The Guadalajara fighter, who has already been a three-division champion, is excited about the challenge of being the first in history to hold all the super middleweight titles.

the Mexican has 56 victories

(38 knockouts), two draws and a single loss to American

, 31, is left with 30 wins (14 knockouts) and one loss in his history.- Record attendance without preventive measures -

had the overwhelming support of the more than 73,000 fans present at AT&T Stadium, in the highest attendance for an indoor boxing match in America.

"People give me the necessary support to continue. Thank you all from the bottom of my heart,"

after the fight, scheduled on the weekend of the Mexican festivities of May 5.

The stadium, home to the NFL's Dallas Cowboys, was also the scene of the largest sporting event in the country since the outbreak of the coronavirus pandemic more than a year ago.

, organizers did not impose physical separation between spectators, most of whom did not wear masks.

With the public totally turned against him,

started the fight trying to contain the Mexican and seeking to impose a slow pace and reduce the blows.

After a first round in which both fighters measured their intentions,

took the center of the ring and began to connect right hands against his rival.

The Mexican did not corner the British in the first episodes but neither did he need to risk to score points and take the lead in the fight.

In the fourth round, 'Canelo' crashed a hard 'upper' to the jaw of

, who managed to recover and begin to annoy the Mexican by intensifying his mobility.

The Briton tried to deconcentrate

constantly lowering his guard and moving around him, but

kept his plan and cold-bloodedly awaited his opportunity in the eighth round, in which he was able to unleash his fury against

The Mexican chained a left and a right hook and, seeing

practically closed, he felt like a winner and encouraged his fans with his arms to redouble their spirits, which became a great celebration when the Briton left.

BoxingPoli Díaz, arrested in Gran Canaria, enters prison after being claimed by a Madrid court

BoxingAndy Ruiz, 20 kilos less and a victory suffered after a year and a half outside the ring

BoxingThe mysterious step back from the great Mexican promise: "I do it for my health and for my well-being"