The first NHL goal for the Swedish defender tonight 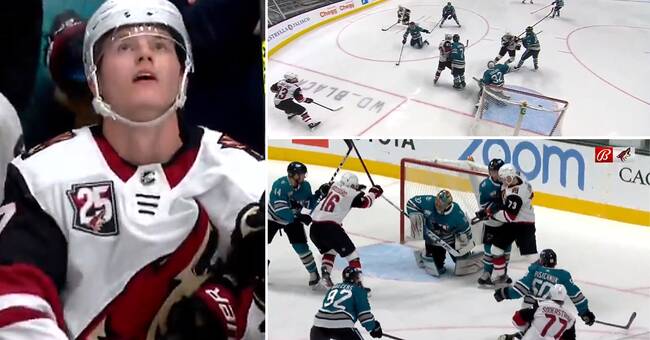 The first NHL goal is always special and is a goal that the players in the world's best league will remember for the rest of their lives.

Then why not take the opportunity to do it nicely?

Maybe that's what Victor Söderström thought when he scored his first NHL goal in his third game for Arizona when he equalized to 1-1 at home against San José.

It was five minutes into the second period - after Erik Karlsson gave the guests the lead in the first - that Söderström found the right one.

The 20-year-old Swedish defender got the puck from compatriot Oliver Ekman-Larsson in his back position, shot away an opponent, advanced with the puck and lifted it up in the net roof at the far cross.

A very nice goal by Söderström who formed the first back pair with Ekman-Larsson the whole match.

Debut goal for the young forward

Another who had an unforgettable evening - but not with an equally spectacular goal - was Arizona's Czech forward, Jan Jeník, 20.

He made his NHL debut last night and was the one to put the nail in the famous coffin with his 5-2 goal in the open box.

Goals directly in the debut, ie for the young Czech.

Unfortunately, there will be no playoffs this season for Arizona.

This despite the fact that they lost after extra time away against Vegas.