Eight seconds from Tokyo: how Johaug ended up in the Olympics in the 10,000 m race

Norwegian skier Teresa Johaug tried to qualify for the Summer Olympics. She took part in the 10,000 m race, in which she tried to surpass the qualification standard. The 14-time world champion took just over eight seconds to qualify to start in Tokyo. 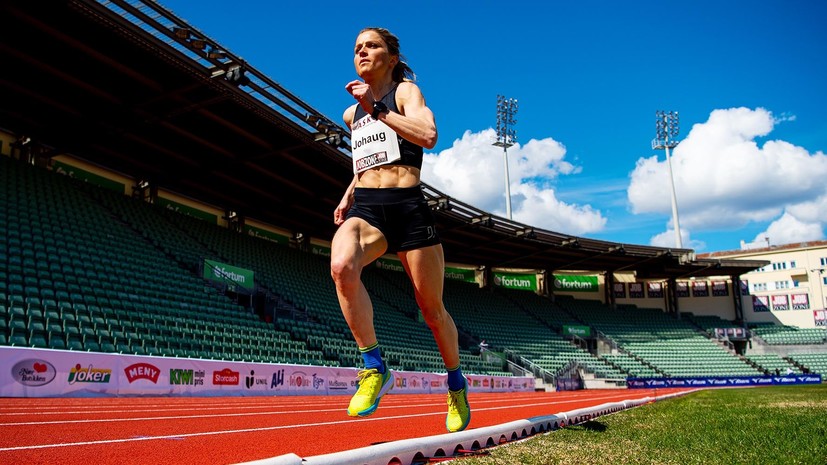 The best skier on the planet Teresa Johaug almost conquered another height in her career.

The Norwegian, who has won 14 gold medals at the world championships in her sport, tried to qualify in athletics for the Tokyo Summer Olympics.

The 32-year-old took part in the 10,000-meter race and lost the qualifying standard by just eight seconds.

Johaug has long been known for her love and accomplishments in distance running.

In the summer, when the cross-country skiing competition does not take place, she allows herself to run the longest track distance at the official starts, which amazes the fans of athletics.

In 2019, Johaug took part in the Norwegian Championship and sensationally won it with a score of 32: 20.86 - she managed to fulfill the standard for the European Championship, which was subsequently canceled due to the coronavirus pandemic.

In the summer of 2020, Johaug again tried on the role of an athlete.

During the unofficial stage of the "Diamond League" in Oslo, she received from the organizers the opportunity to run 10,000 meters under the supervision of the judges, who would officially record her result.

Johaug ran alone and improved her personal best by almost 40 seconds - the final result was 31: 40.67.

Then the Norwegian lost less than 16 seconds to the Olympic standard, which is 31: 25.00 and is a coveted goal for many athletes from all over the world.

In the case of Johaug, it became obvious that if she devoted a little more time to simple running, and not skiing, then at least she would be among the best athletes in the world.

It is possible that she would even manage to impose competition on African runners.

With the end of the winter season, which brought Johaug four world titles in cross-country skiing and another "Big Crystal Globe", the athlete decided to re-enter the track.

She entered the competition in Oslo, which was organized specifically for the bronze medalist of the European Championship, Carolina Grovdal, so that she could fulfill the qualifying standard for the Olympics.

The participation of the Olympic champion in cross-country skiing immediately added intrigue to the competition.

Her manager Jorn Ernst said that Johaug would try to surpass the Olympic standard, but at the same time noted that there was no talk of a trip to Tokyo yet.

The fact that the skier was very serious about the race was also evidenced by the fact that her running coach was Jack Weitz, a well-known specialist in Norway who brought up the first world marathon champion Greta Weitz.

If successful, Johaug could go down in history and become one of the few athletes who participated in both the Summer and Winter Olympics.

In Norway, the interest in the participation of a skier in the race was so high that it was even broadcast live on the NRK TV channel.

It is worth noting that in order to make it easier for Johaug and Grovdal to run at the required time, the organizers used a special technology.

At Bislett Stadium, where the race was held, there are many lights along the treadmill that light up in different colors depending on whether the athlete is on schedule or not.

A year ago, this technology was already used in the Johaug race, and thanks in large part to it, it was able to come close to the coveted standard.

From the start of the race, Grovdal ran away from the main group along with pacemaker Amalia Seten, who helped maintain the pace for several laps.

Johaug did not have such a privilege - she had to fight for her result alone.

She herself could not hold on to Grovdal and released a professional runner early.

After the first third of the distance, it was noticeable that Johaug was not easy to run. She could not follow the technique, the movements were too sharp, and her breathing was very heavy - the NRK commentators said that the skier could be heard even in the empty stands of the stadium. Sometimes additional problems were created for her circular. If in cross-country skiing weaker opponents must give way, then in athletics there is no such requirement for them. Johaug had to spend extra fractions of seconds to run around other participants and return to the desired track again.

At the same time, the skier felt an incredible sense of purpose and a desire to endure until the finish line. In spite of everything, she continued to run at her own pace and for a long time really claimed to be able to beat the standard. Only five laps before the end it became clear that the fight with the stopwatch was lost - the lights along the track changed color to red and did not change back. Johaug had the strength to accelerate slightly on the finish line, but this was not enough. The best skier in the world ran 10,000 meters in 31: 32.88. She broke her personal best and at the same time was left without a result that would allow her to qualify for the Olympic Games in Tokyo.

After the race, Johaug said that she was incredibly happy to go to the start and test myself. She noted that trying to beat the Olympic standard served as a good motivation for her. But at the same time, she disappointed journalists when they asked if the Olympic champion in cross-country skiing was really going to go to Tokyo. Johaug stated that even if she performed successfully, she would not have gone to the Summer Olympics. She has competitions in Beijing ahead, and she will only prepare for them.