Effortlessly: how Russia defeated Belarus and reached the semifinals of the Junior World Ice Hockey Championship

The Russian national team beat the Belarusian team and reached the semifinals of the junior ice hockey world championship. As part of the national squad, Matvey Michkov scored the tenth goal in the tournament. Danila Yurov, Artyom Duda, Ivan Miroshnichenko and Vsevolod Gaydamak also scored goals. In the course of the second period, the Belarusians managed to reduce the backlog to a minimum, but Albert Leshchev's wards in the final 20-minute brought matters to a victory - 5: 2. 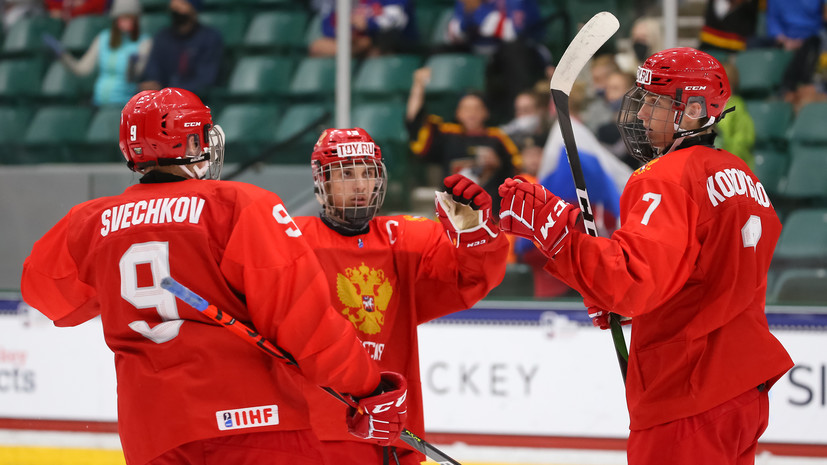 Russia as the clear favorite

The Russian team spent the group stage of the junior world ice hockey championship in one breath.

In four games, she won three victories and lost only to Finland in the shootout.

However, after this misfire, the domestic team defeated Germany and the Czech Republic with a total score of 17: 2.

The main character in the team of Albert Leshchev was 16-year-old Matvey Michkov, who scored nine goals and took the lead in both the sniper race of the tournament and the list of top scorers - 11 points for performance (9 + 2).

Along the way, the striker climbed to fifth place in terms of the number of goals among compatriots at the YChM.

Evgeny Malkin was on a par with him, and only Alexander Ovechkin (23 goals), Ilya Kovalchuk (13), Nikita Kucherov (11) and Evgeny Kuznetsov (11) were ahead of Michkov.

But even such a convincing performance did not allow the Russians to rise above the second place in the group.

They scored an equal number of points with the Finns (9), but lost to them in a personal meeting.

Nevertheless, in the quarterfinals, the domestic team still got a fairly convenient opponent - Belarus.

They had a good group stage and won crushing victories over Switzerland (7: 1) and Latvia (6: 2).

However, it was difficult for them to resist Leshchev's wards on equal terms.

This was evidenced by the statistics of personal meetings at the YChM.

So, at the last championship of the planet in 2019, the teams' paths crossed at a similar stage, and domestic hockey players threw six unanswered goals into the opponent's goal.

The first period of the reporting match turned out to be rather ambiguous for Leshchev's charges.

On the one hand, they scored two goals and provided themselves with a comfortable score difference.

On the other hand, they allowed the opponent to do a lot.

The Belarusians went out on the ice without a sense of reverence for their rivals and from the first minutes began to carry out bold positional attacks, which the defenders of the Russian national team did not always cope with.

Often, Sergei Ivanov had to enter the game, who made a number of important saves.

But domestic hockey players realized their first moment, and Michkov did it.

In the fifth minute, Matvey received the puck outside the goal, then instead of passing, he suddenly went into a dribble against two opponents and sent a projectile into the far corner from a fairly acute angle.

Thus, the striker scored an anniversary, tenth goal at the YChM.

But this local failure did not affect the actions of the Belarusians.

They continued to whip up the atmosphere in the foreign zone.

For example, Daniil Rogach made a dangerous throw from an average distance.

Following Klimovich broke through to the gate on the starboard side and from an uncomfortable hand sent a shell into Ivanov's trap.

And a little later, Herman Yavash had a similar moment.

He managed to escape almost one-on-one with the goalkeeper and competently cover the puck with his body.

But it didn't work to push it into the net.

But the striker crashed into the goalkeeper's shields, for which he received a two-minute penalty.

After only 12 seconds, the Belarusians were let down by Maxim Sushchinsky, who played with a high stick.

Russia had almost two minutes of a double majority, and the team simply had no right not to take advantage of this opportunity.

As a result, Danila Yurov landed an accurate click from the right throw-in circle and doubled the lead.

The teams did not have time to return to the ice, as Ivan Miroshnichenko drove around the gate at high speed and almost pushed the puck into the near corner.

Following Nikita Chibrikov made a good shot from an average distance.

The opponent was rescued by Tikhon Chaika.

But in the 23rd minute, the team still managed to score.

Fedor Svechkov won a throw-in in a foreign zone and threw a shell at Yurov.

The attacker redirected him to the blue line to Artem Dude, who delivered a powerful click to the far corner.

At that moment, the Belarusians wavered and pressed against their own gates.

Leshchev's wards did not ease the pressure for a second and were close to bringing the matter to defeat.

But Chaika acted better than any praise on the last frontier.

All the more unexpected was the turning point in the game in the middle of the period.

After the first commercial pause, the Belarusians not only came to their senses, but completely and completely seized the initiative.

Now they were leading the assault on Ivanov's gate.

Sergei held out for the time being, but still conceded in the 28th minute.

Ilya Morozov, after passing Miroslav Mikhalev, made an accurate shot from close range.

And then the team of Dmitry Shulga reduced the backlog to a minimum.

The Russians lost the throw-in in their zone and allowed Fedor Nikolaena to send the puck on target from the right throw-in circle.

So the position of the Russian national team became threatening, although quite recently it seemed that the outcome of this confrontation was a foregone conclusion.

Michkov helped the partners cheer up.

After another moment at the gate of Ivanov, he hit Nikita Parfenyuk, and both eventually received a two-minute penalty.

And in a four-by-four format, the domestic team transferred the game to a foreign zone and already missed several excellent chances.

Well-timed goals from Miroshnichenko and Gaydamak

At the start of the final 20-minute Belarusians managed to earn the first majority - Michkov tripped the opponent outside the goal.

But the opponent did not really manage to take advantage of the numerical superiority.

I remember only the powerful shot of Klimovich from the left throw-in circle, which Ivanov coped with with some difficulty.

But the Russians soon scored the most important goal.

Miroshnichenko grabbed the puck in the middle of the site, easily ran away from one defender, beat the second and delivered a shot from close range.

Chaika rescued his team, but was powerless on finishing.

Finally, the fate of the confrontation was decided after a gross mistake by Shulga's wards in their zone.

The opponent's defender tried to pass to his partner at his goal, but in fact presented the puck to Vsevolod Gaydamak.

The striker played perfectly on the interception and did not leave Chaika a chance.

After that, the Belarusians themselves realized that it was unrealistic to make a comeback.

Soon they earned another majority, but again they did not create anything at the Ivanov gate.

The rest of the meeting they spent in the attack rather by inertia.

The Russian national team, having gone through unpleasant moments in the second period, calmly brought the matter to victory and made it to the semifinals.