Al-Anbari: The "Asian Champions" system did not favor Sharjah ... and 5 factors that led to qualification

Sharjah coach Abdulaziz Al-Anbari said that there are five factors behind the team's qualification for the 16th round in the AFC Champions League, after winning the penultimate round, the day before yesterday, over Al-Quwa Al-Jawiya team 3-2, to lead the second group with 11 points, and settle Round of 16 card. And solve in A. 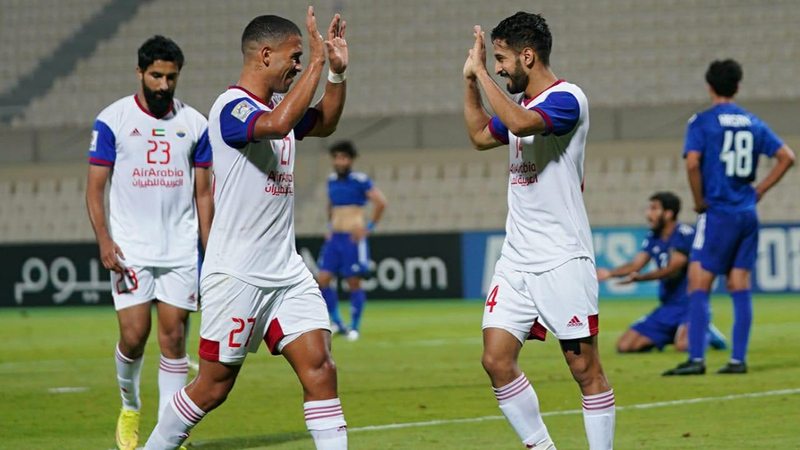 Al-Anbari: The "Asian Champions" system did not favor Sharjah ... and 5 factors that led to qualification

The Sharjah team celebrates after securing qualification before the round of the conclusion of the first round.

Sharjah coach Abdulaziz Al-Anbari said that there are five factors behind the team's qualification for the 16th round in the AFC Champions League, after winning the penultimate round, the day before yesterday, over Al-Quwa Al-Jawiya team 3-2, to lead the second group with 11 points, and settle Round of 16 card.

Al-Anbari denied in the tournament's press conference that the Sharjah team had a special advantage due to the timing of the group matches, as they were held on its home soil, and said: "The AFC Champions League system did not favor Sharjah."

He pointed out that the timing was good for all teams, and Sharjah, among them, benefited from playing at 10 pm instead of seven, due to the circumstances of the month of Ramadan.

Al-Anbari said that the team was able to qualify, taking advantage of five factors, namely: the strong personality of the team, and the timing of the matches by playing at 10 o'clock, which gave the team a physical comfort, in addition to the great self-confidence of the players and their abilities, as well as the team's benefit from its previous experience in the Asian championship, and finally stability In the lineup.

He added: "The match was difficult, during which the players exerted a great physical and mental effort, especially in front of a strong and organized team, such as the Iraqi Air Force, which was playing without pressure, but the team's personality was behind the decision to qualify for the next round."

On the possibility of giving the substitutes the opportunity to play the last match against the Iranian Tractor, as it is a foregone conclusion, Al-Anbari said: "It is the right of the substitute players to take their chance in the next match."

He hinted that he might try to find a specific combination, especially since consistency in the formation is also important, according to him.

For his part, Sharjah striker Salem Saleh, who was chosen the best player in the match, after scoring two goals and leading his team well to qualify, confirmed that he was happy to win the round of 16 card, and said in a press statement: “As for me, I will strive more in the next stage, and seize the opportunity that gave me. It was the coach of the team ».

On the one hand, the coach of the Iraqi Air Force team, Ayoub Odisho, confirmed at the press conference that his team was not bad, and blamed the "silly mistakes" of his players, and gave Sharjah the opportunity to win.

He said he was preferring the regular round-trip system, rather than the closed group.

But he stressed that the results in the tournament will not affect the ambitions of the team in the local Iraqi league, especially as it leads the tournament.

He continued: "The team will be affected by the major injuries suffered by the players of the team, and it may lead to the absence of some of them for a period ranging between one and two months."

• 11 points for Sharjah at the top of Group B, compared to 7 for the second Tractor, 4 for Pakhtakor, and finally for Air Force One with two points.

5 factors behind Sharjah reaching the 16th round

1- The strong character of the team.

3- The players ’great confidence in themselves and their ability.

4- Sharjah benefited from his previous experience in the championship.

5- Consistency in the lineup.