FC Bayern: Suddenly there are 30 million euros for Nagelsmann in the room

FC Bayern want to create clarity on the coaching post. Contact has already been made with Leipzig's trainer Nagelsmann. Obviously, this will be extremely expensive. On the other hand, there shouldn't be a cent for the outgoing flick. 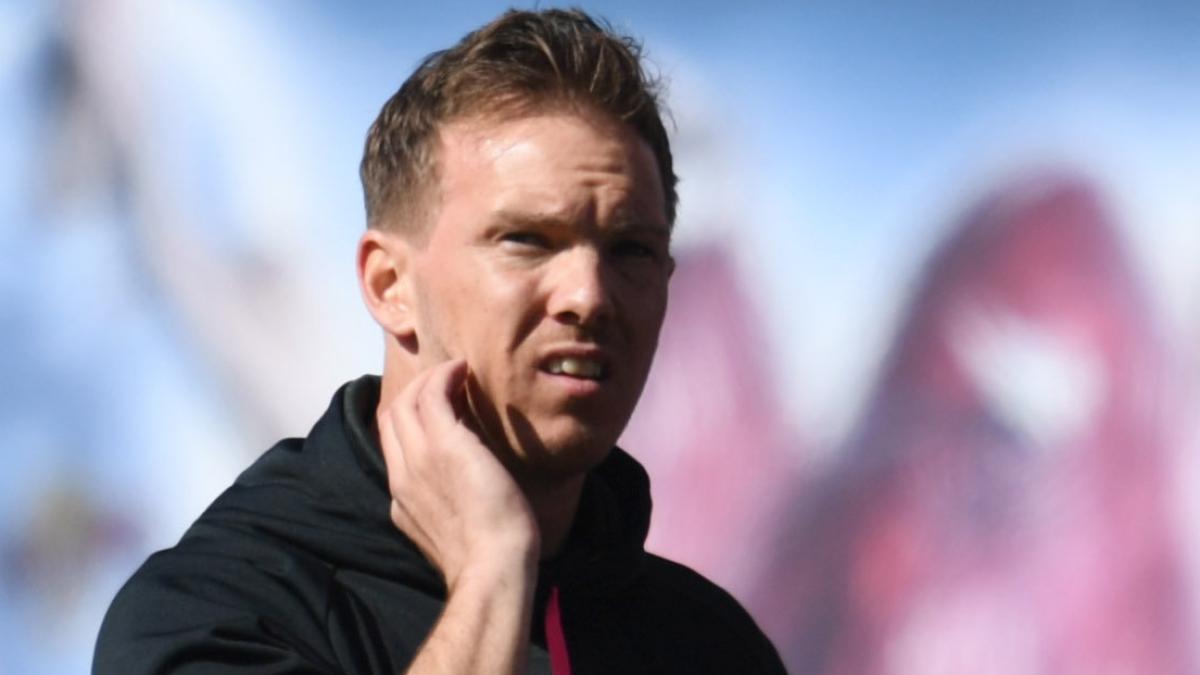 The courtship for Julian Nagelsmann has gained new momentum.

After the RB Leipzig coach recently asserted several times that he had not had any talks with FC Bayern, the German record champions should now get serious.

According to matching media reports, the Munich club management made contact with the Leipzigers because of the 33-year-old.

Bayern coach Hansi Flick (56) had announced that he wanted to leave Munich after the season.

A decision to terminate the contract could be made this week.

Flick is considered a candidate to succeed national coach Joachim Loew in the German national team.

The Leipziger should demand a transfer fee in the double-digit million range for their courted trainer Nagelsmann.

That would be a new dimension.

So far, the 7.5 million euros that Borussia Mönchengladbach transferred for the summer change from Adi Hütter to Frankfurt is the record transfer fee for a Bundesliga coach.

According to "Bild" it should even amount to 30 million euros in the case of Nagelsmann.

Other media also reported unanimously on Sunday evening that Munich had contacted them about Nagelsmann.

So far it is only unclear whether this is compatible with the motto issued by Bavaria's CEO Karl-Heinz Rummenigge.

In an interview with “Bild am Sonntag” at the weekend he sketched that the big top clubs in Europe such as Bayern Munich had made the mistake of “submitting to a demon called Transfermarkt” in the past.

Corona harmed us all, some more, some less.

We have to draw the conclusions from this. "

Astronomical transfer fees, as they are now apparently in the room in the Nagelsmann case, should henceforth be avoided per se.

He strives “not to inflate the costs even further, but to reduce them.

FC Bayern want to decide in the Flick case shortly

Just a few days ago, on the other hand, RB sports director Markus Krösche emphasized that it made no sense “to award transfer fees or price tags.

Julian has a long-term contract and a very good team, "he said on Sky.

Nagelsmann's contract in Leipzig is valid until 2023 - without an exit clause.

Nagelsmann had recently referred to it regularly and said, for example, that he would “not start a war with my employer” and that there would be “no disputes”.

But the speculations about a Nagelsmann engagement in Munich hold and intensify.

First of all, CEO Karl-Heinz Rummenigge is aiming for a prompt solution in this matter after Flick's wish to leave.

"We have agreed that we will sit down after the game in Mainz," said Rummenigge.

Bayern lost 2-1 in Mainz on Saturday.

Because RB defeated VfB Stuttgart 2-0 on Sunday, the decision in the Bundesliga title fight was postponed again.

When asked about a possible transfer fee for Flick, Rummenigge said: "If we are to meet Hansi's request, all parties must work together to find a solution that FC Bayern is also satisfied with." Flick's contract in Munich also runs until 2023.

"The DFB will not pay any transfer fees"

However, DFB Vice President Rainer Koch ruled out that the German Football Association would pay a transfer fee for a national coach.

"The DFB will not pay any transfer fees because it has never paid transfer fees and because, as a non-profit association, it is difficult to do so," he said on Sunday evening in the Bayerischer Rundfunk program "Blickpunkt Sport".

With him as one of the decision-makers, that was Koch's message, not a cent will flow to the record champions.

The 62-year-old announced his resistance in the event that the DFB had to pay money for Flick or another coach.

“From my position as the first man in amateur football, I would definitely disagree.

The DFB doesn't have an infinite amount of money, ”he said.

He would describe it as "immoral" if the DFB had to pay 30 million euros, which it would have to take away elsewhere in its budget in the end.

He also recalled that coaches and officials from the DFB had switched to clubs and named the coaches Manuel Baum (for Schalke 04) and Hannes Wolf (for Bayer Leverkusen) and, years ago, Matthias Sammer for FC Bayern.

"No money was paid and none was asked for."

In any case, the debate about possible trainer castling should gain further momentum in the coming days and weeks. For RB, the vortex comes at an unfavorable time, because after the victory against Stuttgart, full concentration applies to the DFB Cup semi-finals on Friday at Werder Bremen (8.30 p.m., in the sports ticker of WELT). With a win, RB is in the final. And Nagelsmann would have the chance to win his first big title.