"We fight for both the coach and the general director": Golubev on the defeat of Spartak, Gazizov's return to Ufa and Stukalov's model

Although Shamil Gazizov does not participate in the training process, he motivates the team, and his return to the post of General Director was a breath of fresh air for Ufa. Midfielder Artyom Golubev stated this in an interview with RT. The midfielder answered whether the players were in the mood to avenge Gazizov in the match of the 26th round of the RPL against Spartak, said how he reacted to the rumors that the match with Akhmat was negotiated, and described the new head coach of the team, Alexei Stukalov. Among other things, he explained why he considers the performance of the Russian youth team at Euro 2021 a failure. 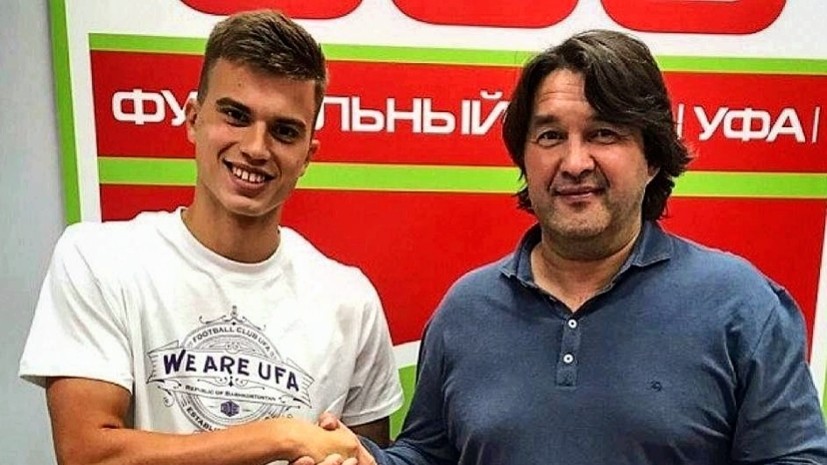 - In the 26th round of the RPL "Ufa" sensationally won a victory over "Spartak".

Surely you spend this week in high spirits?

First, the eminent club was beaten.

In my opinion, we have a good chance of staying in the Premier League.

A very important stage of the season, key matches, awaits us in the future.

Recent meetings have shown that we are able to defeat even strong opponents.

It's just that no one will be with us.

How can this be explained?

- The results of the team work - and I mean not only the players themselves, but also the coaching and medical staffs, management.

We had to endure for a very long time to return to the victorious track again.

There was a series of failures, which greatly affected the psychology of the team.

We needed to take a breath of fresh air, to feel that we are capable of winning.

And that success in the meeting with “Akhmat” on the home arena inspired us, restored our confidence.

- You've probably heard that many did not attach any importance to your victory over Akhmat.

Some bloggers and journalists even said that all this was part of a plan to expel Rotor to the FNL.

Was the desire to prove otherwise motivated before the 26th round?

- The team did not attach much importance to rumors that the match against Akhmat was negotiated.

Everyone has their own opinion, people had every right to express it.

But in the meeting with Spartak we proved everything to everyone.

- In the offseason, there was a lot of talk about the fact that Ufa could become a kind of farm club for Spartak on a par with Khimki.

Of course, this was primarily due to the presence of Shamil Gazizov in the Moscow club.

How did you feel about these rumors then?

I know very well both Shamil Kamilyevich himself and everyone in Ufa.

I understood that this could not be.

This was confirmed by a draw in the first round match.

But at that moment Gazizov held the post of general director of Spartak.

Even then it became clear that this was talk about nothing.

Then the red and white scored a point, now - not a single one.

Yes, people are hyping this topic.

But in reality it turns out that there are no grounds for such statements.

- Do you think that in the Russian championship there may exist teams that are ready to give points to a certain opponent at the right time?

- The strongest teams of the country are represented in the RPL, skilled foreigners come to us.

Our league is not a sharashkin's office, but a very serious tournament.

I think that now there are no agreements, and I really hope that there never were.

Honestly, I didn't really go into this topic.

But personally, I would like to believe that in the Russian championship the winner is revealed on the basis of a sporting principle.

- In football there is such a thing as “fight for the coach”.

Does it happen that footballers fight for their CEO?

All employees and footballers of the team know that Ufa is a family.

- Consequently, something similar happened in the match against Spartak?

- Of course, everyone is aware of the story with Gazizov's departure from Spartak, but they also understood that we needed to score points.

I think that with the victory in the 26th round we pleased not only ourselves, but also the CEO.

- It was Gazizov who brought the absolute majority of the representatives of the current squad to Ufa.

Did the reputable players call for revenge against Spartak for such an attitude towards the boss?

- Shamil Kamilyevich makes a huge contribution to the development of Bashkir football: he is engaged in inviting football players, controls a number of important processes.

Gazizov is happy about any success of the team - not only the victory over Spartak.

Yes, and we are pleased when he is in a good mood.

We always fight for both the coach and the CEO.

This is normal in our club.

- Do I understand correctly that Gazizov's return can be called one of the most important factors in improving Ufa's results?

Yet this is not the acquisition of a quality footballer or a change of coach.

- To be honest, his return was that very breath of air for Ufa.

Even if he does not participate in the training process, he is still a great motivator.

Just because he is CEO does not mean that he is cut off from the team.

And this is very nice.

The news does not come to you from anyone, but directly from above.

The leader himself will come in, tell you how things are now, what lies ahead.

- When did Gazizov talk to you for the last time and what did he say?

- It happened upon arrival from the European Youth Championship, which we failed.

He said: “You shouldn't lower your head, this is only the beginning of your journey.

In a word, he encouraged me.

Many thanks to him for this.

- Everyone saw how Gazizov rejoiced in the victory over Spartak in the stands, and did he say something to the team in the locker room?

- Shamil Kamilevich communicates with the team after each meeting.

This was no exception.

He congratulated on the victory, thanked for a good game.

- One way or another, the rise of Ufa is now associated not only with the return of Gazizov, but also with the appointment of Alexei Stukalov as head coach ...

- Changing a coach is always a kind of emotional shake-up for the team.

From the first days of joint work, it became noticeable that the mentor is very thorough and pays a lot of attention to all sorts of aspects - from training to tactics.

- Some experts believe that a coach is not able to change anything in two weeks.

Others point out that the same Thomas Tuchel transformed Chelsea's game model on his third day on the team.

What new has Stukalov brought?

- Alexey Borisovich immediately said: "We will not radically change the drawing of the game in a few weeks."

In addition, he noted: "You know how to defend, but goals come from someone else's half of the field."

He said to be located higher, to press more aggressively.

As a result, the goals went up, and the back began to look more reliable.

- In recent years, you have worked with both experienced mentors and specialists under 40.

Is it easier for the second to communicate with young coaches, or is there no difference as such?

- I would not say that it was more comfortable with someone.

I managed to find a common language with everyone; I did not enter into conflicts with any of the mentors.

He himself was always open to dialogue, and the specialists also made contact.

In my opinion, the main thing for a young football player is to be trusted.

If he feels it, then everything else is not so important.

- In the youth team of Russia, you also worked under the guidance of a young coach - Mikhail Galaktionov.

At the end of March, as part of it, you performed at the European Championships in Hungary and Slovenia and could not get out of the group.

Why did you call the team's result a failure?

- Our task was to leave the group.

We did not fulfill it.

I think you can choose a less harsh wording.

Did not fail, but did not complete the task, for example.

But the essence does not change from this.

It's a shame that many players of the current convocation will no longer have a chance to play at the European Youth Championship.

- Fans often reproach Russian footballers that they do not feel responsible for the result, do not worry about defeats.

How did the youth team react to the setback at Euro 2021?

- In the locker room, the faces of the guys showed that everyone was very upset.

Personally, it was hard for me to even say something.

I just sat there, bowed my head and said nothing.

It was a shame that everything ended this way: the whole country was worried and rooted for us, and we lost, and even with such a large score.

There was a feeling of bitter resentment, but I had to endure.

After some time it became easier, but at first it was very difficult.

- No, there were no abrupt movements.

Everyone was upset, sat in their seats and thought about what had happened.

The coach came in, said a few words.

Then we packed up and flew home.

I think there was no reason to swear, throw boots or do something like that.

Everyone wanted to complete the task, none of the composition could be blamed for the lack of dedication.

It just happened that way.

- After the meeting with the Danish national team, you yourself said that the team lost because of your childhood mistakes.

Have you changed your mind now?

- We discussed this with Shamil Kamilyevich upon returning from the youth team.

He said I shouldn't have said that.

He assured me that he did not consider me guilty.

But after the end of the meeting it seemed to me that it was my mistakes that led to two conceded goals.

Of course, right after the match it was very difficult to say anything, and even on camera.

Digest everything that happened on the field.

Therefore, he said what he felt at that moment.

Perhaps I think differently now, but it doesn't matter anymore.

The championship is over, after the fight they don't wave their fists.

- Did Galaktionov tell you something personally about this?

At that moment he was in the locker room and hardly saw the broadcast.

Therefore, he did not comment on my statements in any way.

- You probably know that in 2005 the match between the youth teams of Russia and Denmark ended in a scandal, when five domestic footballers immediately earned deletions.

During the meeting, there was no desire to ride someone's legs out of despair?

- Of course, every athlete is sometimes subject to emotions, but at that moment such thoughts did not occur.

All adults, professionals, no one had the desire to disrupt the match.

Even if you are losing, you should not swing your fists or kick in the legs, but try to seize the initiative and win.

Personally, I had no desire to hit anyone.

- If we abstract from failures, what pleasant memories do you have from the European Championship?

- The main thing is that the Russian national team took part in such a major tournament for the first time in a long time.

She demonstrated that in our country there are young guys who will be able to fight for a place in the adult team in the future.

Of course, the head coach has the last word.

Now many people say: "Strong generation", but in the end it is the mentor who decides everything.