Two Russian teams made their way to the Euroleague basketball playoffs at once. For the first time in history, Zenit will play in the knockout round and compete for the Final Four. The experts from St. Petersburg will be examined by Barcelona, ​​which won the regular championship. In turn, CSKA's regular at this stage will face off against Fenerbahce. True, the Turkish super club will arrive in Moscow with a weakened composition due to the coronavirus epidemic and without head coach Igor Kokoshkov. 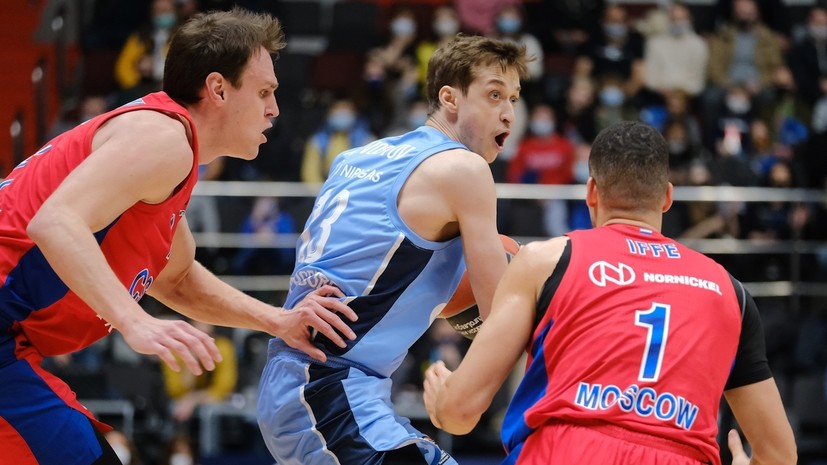 The Euroleague playoff stage is one of the most exciting and dramatic in club basketball. It implies dividing the representatives of the top eight according to the results of the regular season (34 rounds, two rounds, home and away matches according to the “each against each” system) into pairs (1-8, 2-7, 3-6, 4-5). Each series lasts up to three victories of one of the teams, while those having a higher seeding are decisive, the fifth meeting, if necessary, is held at home. The strongest in confrontation will measure their strength in the "Final Four", which will be held in Cologne in late spring - from 28 to 30 May.

The figures were identical to those of the winner of the draw - Barcelona.

However, due to two defeats in personal confrontations (66:76 in the first round and 75:88 in the 20th), the Moscow army team was lower than the Catalans in the final protocol.

Zenit made it to the playoffs from eighth position, actually jumping into the last car of the departing train.

Only victories in the final matches of the regular season did the team of Xavi Pascual guarantee themselves participation in the postseason.

For Petersburgers this result is significant, because never before has a team from this city climbed so high in the tournament bracket.

Barcelona have the most expensive player in Europe

“Zenith” got into rivals “Barcelona” - perhaps the most difficult opponent possible. The Spaniards have one of the most expensive Euroleague squads with Nikola Mirotić at the head. A naturalized Montenegrin earns $ 3.8 million a year, which no other player in Europe can boast of. True, the attacker fulfills every cent that is laid down by agreement: he closes several positions, plows conscientiously in defense and relieves the team of difficulties in attack due to individual skill.

In the support group of Mirotić there are performers no less bright by the standards of the Euroleague, among which are ex-CSKA forward Corey Higgins, the best playmaker of the tournament in recent years, Nick Calates, and a bunch of players from the Spanish national team who appeared in the NBA Alex Abrines - Victor Claver (the latter is familiar to Russian fans in performances for Khimki and Lokomotiv-Kuban).

The head of this team of stars is the former point guard of the Lithuanian national team Sarunas Jasikevicius.

A former Euroleague winner as a player, today he is considered one of the best coaches on the continent.

Before taking the helm of the Catalans, he achieved outstanding success for several seasons in a row with Kaunas “Zalgiris” - in particular, with a meager budget, he took the Lithuanians to the “Final Four”, which automatically turned him into the best coach of the tournament.

Today, under his leadership, Barcelona have the most reliable defense in the Euroleague and boast a variety of attacks.

Therefore, “Zenith” will have to try very hard to upset the grandee.

Pascual and Pangos vs. Former Employers

Before the battle with Barcelona, ​​Pascual's team is being tuned in at least by the results of head-to-head meetings in the regular season. Away Zenit lost only four points, while at home they completely defeated an opponent (74:70). In addition, the head coach of the Russians, perhaps, like no one else knows the weaknesses of the Catalans. From 2004 to 2016, he worked in the blue garnet structure, and for the last eight seasons of cooperation he led the team.

It was under the leadership of Javier that the Spaniards won the Euroleague for the last time in club history (season 2010), and also became the best in the country four times. Moreover, Pascual is well aware of the capabilities of Jasikevicius: in the 2012/13 draw, Xavi coached the Lithuanian, defeating him in the King's Cup squad. Curiously, some of the tactical schemes of today's Barça are painfully reminiscent of Pascual's rallies during his collaboration with the Lithuanian.

Kevin Pangos also has personal accounts with the Catalans.

For two years of performances in the blaugrana cage, the playmaker was not appreciated.

Before Jasikevicius came to the club, whose Canadian shone in Zalgiris, the athlete signed a contract with Zenit.

And already there he again turned into an impeccable conductor, connecting any links and lines of the team into a single canvas.

The confrontation between the teacher, who gave Pangos a ticket to the high society, and the virtuoso student, will undoubtedly decorate the quarterfinals and give St. Petersburg an additional trump card (including emotional) when opposing the grandee.

Fenerbahce is headed by the coach who won the EuroBasket

The capital's army team will have to face off against Fenerbahce, the team they beat in the Final Four of the 2015/16 season. Hence the fundamental rivalry between the teams, which was aggravated by the confrontation at the coaching level. From 2013 to 2020, the Istanbul team was led by eljko Obradovic, the most successful coach of European basketball. Whereas from the Russian side, he was first challenged by Ettore Messina, the antagonist of the Balkan since the late 1990s, and then by Dimitris Itoudis, ex-assistant to the legend in Greek Panathinaikos and a close friend (Obradovic is the godfather of the daughter of the current steering CSKA).

Now the severity on a personal level has diminished since eljko left Istanbul in the summer.

However, Fenerbahce is still taken seriously in Russia - partly because of past confrontations, partly due to the powerful starting five, which helped the Turks to issue a streak of ten victories in a row in the middle of the season.

Former CSKA playmaker Nando de Colo is considered one of the most effective first numbers in the Euroleague in terms of the number of productive actions during his stay on the floor.

While Jan Vesely remains the most versatile “big”, capable of defending not only in the profile position of the center, but also as a light or heavy forward.

A team is built around them, which is famous for discipline, tactical flexibility and the ability to change the strategy of the game several times a night.

The mentor of the Istanbulites is worthy of a separate paragraph.

Igor Kokoshkov led the Georgian national team from the depths of Division B of the European Championship to the final part of the tournament, sensationally won the continental championship with the Slovenes in 2017, worked as an assistant in NBA clubs for two decades and won the tournament with Detroit in 2004.

By the age of 49, Kokoschkov has achieved the status of one of the most successful and fundamental Balkan trainers of the 21st century.

And already in the first independent year of work with Fenerbahce he confirmed it.

After all, the financial crisis in the summer forced the club management to radically cut the budget and abandon almost all the leading performers, while the mentor assembled from scratch such a combat-ready squad, which today is able to break into the Final Four.

Coronavirus in the Fenerbahce camp

The COVID-19 epidemic that hit Fenerbahce a few days before departure to Moscow can simplify the task of reaching the Final Four for CSKA.

Seven people from the Turkish team immediately received positive test results, which is why the match of the national championship with Anadolu Efes was canceled.

In a halved composition and without a commander-in-chief, the Istanbulites went to Russia, which, obviously, would seriously affect their combat capability.

In addition, Jan Vesely, a key player in Kokoshkov's cage, will remain out of the application for two starting meetings due to injuries.

Almost all defensive interactions and basic combinations are tied to the center.

This gives the Russians a colossal advantage that they must enjoy.

Indeed, in such a context, even the loss of Nikola Milutinov by the end of the season does not seem critical.