Erik Niva on the new proposal: "A deep personal grief"

Twelve European big clubs want to break out to create a football super league. The criticism has been massive from the beginning - not least from the football journalist Erik Niva. - This means that something that has been so extremely important to me and millions of others is taken away from us, without there being any opportunity to do anything about it, says Niva in SVT's "Morning Studio". 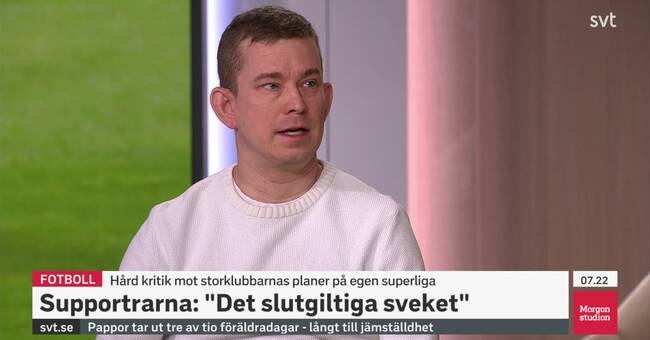 Twelve major European clubs have launched their plans for a closed super league.

Football journalist Erik Niva has since the news came expressed his grief on social media, and when he visited "Morgonstudion" this morning, he stated that European top football has a fundamental problem.

- It is a deep personal grief.

Those who are most affected, those who are most involved, they do not have a real opportunity to make themselves heard, to influence the situation or have their say before the fact has already been stated, he says.

"Will have no commitment left"

The big clubs are governed by states and sheiks, among others.

Niva believes that this is not the start of the commercial manipulation of football, but that it is definitely the step over to a football that is driven by money and not achievements.

There is an uncertainty, sometimes the sun shines and sometimes it rains.

These clubs want the sun to always be guaranteed over them, says Niva.

Niva also believes that the super league is a crime against everything that football has stood for for more than a hundred years.

- I personally will not have any commitment left for the football that breaks loose and is only based on financial strength.

SEE MORE: The federal base on the super league: "It is a declaration of war"