Historical breakthrough: the Russian men's curling team reached the World Cup semi-finals for the first time and qualified for the Beijing Olympics

The Russian national curling team became the main opening of the world championship among men's teams, taking place in Calgary, Canada. For the first time in its history, Sergey Glukhov's team reached the semifinals, guaranteeing themselves at least second place after the round robin. This success also allowed the Russians to independently qualify for the Olympic Games in Beijing for the first time. 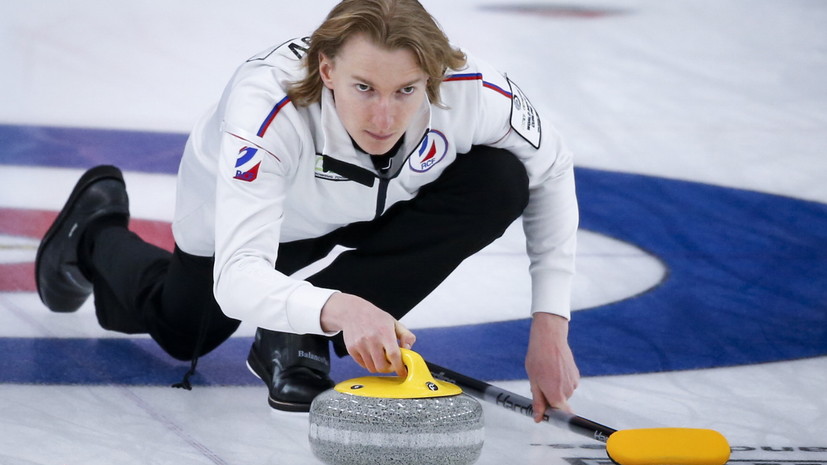 In Calgary, Canada, the round-robin stage of the men's world curling championship is coming to an end.

The Russian national team, led by skip Sergei Glukhov, has achieved an incredible result for itself - for the first time in its history it made it to the semifinals and won the right to compete at the 2022 Winter Olympics in Beijing.

Now the team has a chance to win their debut medals.

Like many sports, the world's curling has had great difficulty in hosting competitions due to the coronavirus pandemic.

A year ago, the world championships for men, women and mixed doubles were canceled, and this season there were no regional championships and junior competitions.

A big blow was dealt to the club competitions taking place in Europe and Canada.

But the International Curling Federation (WCF) managed to reach an agreement with Calgary so that this city would host the world championships organized on the principle of the "bubble" and they would not have to be canceled again.

The Russian national team was originally not supposed to go to Canada.

The team, which was also led by Glukhov, in 2019 flew out of the elite division of the European Championship and took second place in the qualifying tournament.

But the WCF decided to expand the list of participants, including the best national team from the world ranking, and then Russia got the ticket.

By all accounts, the Russian squad could not be considered the favorite of the world championship.

Men, unlike girls, have not yet managed to win medals even at the European championships, and at world forums the best result was ninth place in 2018 and 2019.

Although the Russians were selected according to the rating, but in it the Glukhov team takes only 44th place, and among the participants in the competitions in Calgary - only 11th.

With such introductory data, there was no hope of even reaching the playoffs, where six teams fall.

However, the World Cup schedule came to the rescue of the Russian curlers.

It was as if it was specially selected so that the competition had to start with matches with outsiders.

With all teams suffering from a lack of competitive practice, this was a great warm-up.

Glukhov's team started with three victories in a row.

First, she beat the Netherlands (8: 5), whose player made a big mistake in the sixth end and did not prevent the Russians from stealing three stones at once.

On the same day, the FCR team inflicted a real defeat on South Korea (9: 3), forcing it to surrender after the seventh end.

In the next game, the Russians prevailed over China (10: 6), despite the fact that the opponents had the advantage of the last throw in the tenth end, which they themselves did not carry out.

Only Canada and Norway had won three matches out of three at that time.

On the third day, the Russian team met with the winners of the last two world championships and Olympic silver medalists from Sweden.

For a long time, no one managed to take possession of a noticeable advantage, until the Scandinavians came out ahead by two points in the ninth end.

But Glukhov's squad responded in kind, as a result of which the winner had to be determined in the extra-end.

Only one stone of the Swedes was closer to home, and the Russians suffered their first defeat (7: 8).

The next two matches allowed him to return to the top three of the tournament table.

The Russian national team beat Germany (6: 4) in a very nervous meeting with three zeroed ends, and then defeated Japan (10: 5) thanks to the excellent shot of Glukhov, who brought three points in the eighth round.

Only one more undisputed favorites from Switzerland managed to stop the team that was gaining momentum - the game had to be finished ahead of schedule, since it was already impossible to recoup from the score 2: 8.

After that, the Russians began a new winning streak, which continues to this day.

The first step in it was a beautiful victory over the Olympic champions from the USA (11: 8).

The FCR team took the lead with a score of 5: 0 after two ends and lost all its advantage by the seventh.

At this moment, Glukhov showed incredible restraint - in the next attempt he brought the team four points at once.

The game with Italy turned out to be just as tense, but thanks to the stolen eighth end, the Russians won again (8: 7).

The main test for the Russian national team at the circular stage was the game with the strongest curling country - Canada.

Glukhov's team held this meeting almost flawlessly - thanks to two stolen ends, they approached the decisive rally with a three-point advantage.

But at that moment, the owners' skip Brendan Boettcher showed his skill - his throw helped to eliminate the gap.

Fortunately, in the extra-end it was the Russians who had to throw the stone last, and Glukhov was able to get his debut victory over the Canadians at the World Championships.

At the same time, he, together with his partners, managed to lead the standings.

In the next meeting with the Norwegians, the Russian team lost one point before the last end.

Glukhov had a chance to lead the team forward, but a small mistake allowed only to level the score.

In the additional end, Norway had the advantage of the last throw, but her skip Steffen Walstad did not calculate his strength - his stone did not reach home, and the Russians scored two points (8: 6).

This victory allowed the team to advance to the playoffs.

At the same time, its participants are entitled to a ticket to the Olympics in Beijing.

For the first time, the Russian national team was able to independently qualify for the Games - before that it played in Sochi, but as a host.

To celebrate this event, Glukhov's team defeated Scotland (9: 2) in six ends and was able to guarantee itself at least a second place in the round robin and an automatic advance to the semifinals.

Before the playoffs, the Russians will still play with the Danish team, which occupies 11th place and does not pretend to continue the struggle.

In the last rounds, it will also be determined with whom the FCR team will contest the medals.

In addition to her, Sweden, the USA, Canada and Scotland passed the circular round.