China News Service, Beijing, April 7 (Reporter Yue Chuan) After completing the 5-day Winter Olympics ice hockey project related testing work, the National Stadium began to change the venue on the 6th to prepare for the subsequent Winter Paralympic ice hockey testing activities . This is another "transformation" of the National Stadium after its conversion from a summer stadium to a winter stadiu 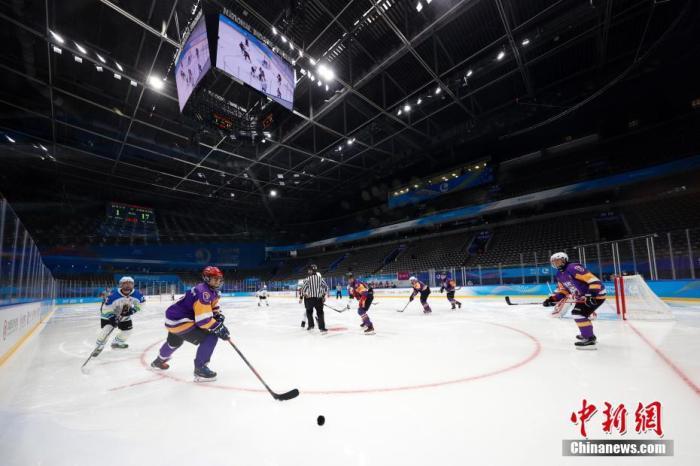 This is another "transformation" of the National Stadium after its conversion from a summer stadium to a winter stadium.

On April 2, the athletes were in the ice hockey project test activity.

On the same day, the "Meet in Beijing" ice hockey test event kicked off at the National Stadium in Beijing.

The conversion work involves not only the two, but also the areas where the intermediate personnel flow.

Unlike ice hockey that is more familiar to ice and snow enthusiasts, Paralympic ice hockey, also known as sled ice hockey, is one of the two ice games at the Paralympic Winter Games.

At the Beijing Paralympic Winter Games, the project set a gold medal.

In Paralympic ice hockey, players sit on special seats on ice sledges to participate in the competition, and the seats are very close to the surface of the ice.

The toothed end at the top of the two ends of the club is used to push the ice and slide, and the end like a paddle is used to hit the ball.

Therefore, although the specifications of the Paralympic ice hockey venues are exactly the same as those of the Winter Olympics, due to the differences in the way players play, there are many details of the hardware facilities that need to be adjusted, which also highlights the importance of venue conversion.

The staff is stepping up construction

According to Ge Yuanpeng, coordinator of the National Stadium ice hockey project, the adjustment of the stadium hardware is mainly reflected in four aspects.

The first is the board wall.

This is because the sight of the skaters is low, and the transparent wall will facilitate the players to observe the game.

Then comes the adjustment of the ice surface, which is mainly reflected in the thickness of the ice layer. The ice surface of the Paralympic ice hockey games is relatively thicker.

In regular ice hockey rinks, there is generally a certain gap between the board wall and the ice surface, and players will step from the athlete's bench or penalty box to the ice surface.

However, paralympic athletes use ice sleds, so the thickness of the ice surface of the arena needs to be increased to find the height so that the athletes can slide directly into the arena.

The training hall has completed the wall replacement

There is also the laying of artificial ice boards.

In order to enable athletes to better move on and off the stadium, they do not need to switch back and forth between sleds and wheelchairs. The corresponding locations in locker rooms, training halls, and stadiums will be covered with artificial ice boards to make it easier for players to slide through.

In addition, in terms of the streamline of athletes, from the actual appearance of players, Paralympic ice hockey also needs some adjustments.

In addition to the above adjustments to the hardware facilities, the venue team also made corresponding preparations in terms of execution.

Although the rules of ice hockey and ordinary ice hockey are basically the same, there are still differences in details, which requires the referee to master the scale and ideas.

Ge Yuanpeng said that the referees who participated in the test have rich experience in the enforcement of ice hockey matches, but they are relatively lacking in Paralympic ice hockey and need to know more about it.

The staff installs the transparent board wall

According to the plan, the ice surface of the competition venues will be adjusted and converted on the afternoon of the 7th, and all referees will also be intensively trained on the 8th, so that the various test activities related to the Winter Paralympics will meet the expected standards.