Double Mbappe, two passes by Neymar, five saves by Mendy: how PSG and Chelsea achieved away victories in the Champions League quarter-finals

PSG and Chelsea have won away victories in the first quarter-finals of the Champions League. The Parisians were stronger than Bayern thanks to Kilian Mbappé's double and Neymar's two assists, interrupting the opponent's 19-match unbeaten run in the tournament. In turn, the Londoners scored two unanswered goals against Porto. The main hero of the confrontation was the goalkeeper of the guests Eduard Mendy, who made five saves. 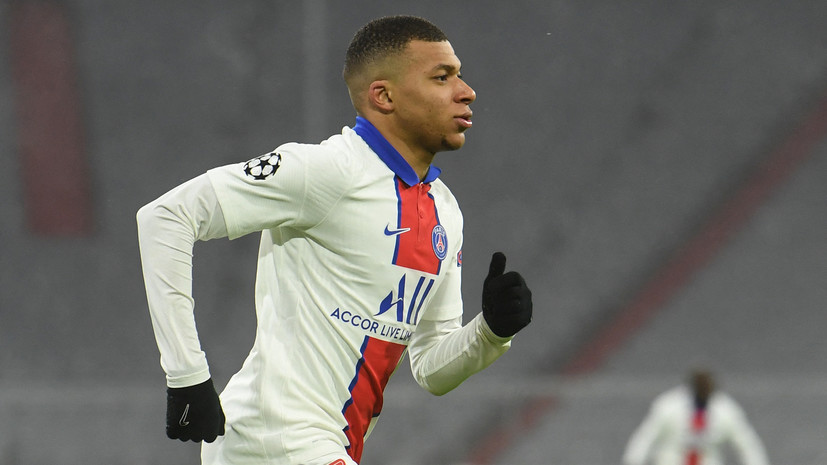 In the central match of the Champions League quarterfinals, Bayern hosted PSG.

Last season, the rivals met in a decisive confrontation of the tournament, but this time the draw brought them together much earlier, and someone had to complete their performance in the main European Cup in April.

The Parisians, of course, were eager to take revenge for the defeat in the final with a minimum score.

The Munich players were left without top scorer Robert Lewandowski, as well as Corentin Tolisso, Douglas Costa and Serge Gnabry.

But Neymar returned to service, having missed both matches with Barcelona.

The Brazilian, along with Angel Di Maria, were located on the flanks of the attack, while Kylian Mbappe was at the forefront of the attack.

In the support zone, in the absence of Verratti, the duet was made by Pereira Danilo and Idrissa Geye.

Finally, the problematic left flank of the defense was forced to take the nominal center-back Abdou Diallo.

At Bayern, Lewandowski was replaced in front by Eric Schupo-Moting, who got into the base and in the last game of the Bundesliga with Leipzg.

On the flanks, he was supported by Kingsley Coman and Leroy Zane, and under the striker, by tradition, Thomas Müller was located.

The match began with little or no buildup.

Already in the second minute, Shupo-Moting sent the ball into the crossbar of someone else's goal with his head.

And PSG opened the scoring in response to the attack.

Neymar in the penalty area gave the pass to Mbappa, and he hit the ball into the near corner.

The blow was powerful enough, but Manuel Neuer, it seemed, should have rescued the team without any problems.

However, the slippery projectile ricocheted from the goalkeeper's hands into the net.

According to this indicator, he bypassed Antune Griezmann and caught up with Luis Suarez and Mario Gomez.

“Bayern” did not seem to notice what happened.

The Munich players pressed the opponent to the goal and had an overwhelming advantage in possession of the ball.

If not for Keylor Navas, the hosts could quickly recoup.

However, the Costa Rican made several memorable saves at once.

In particular, he miraculously parried Muller's hit with his head at close range and coped with a powerful shot from Benjamin Pavar from outside the penalty area.

So, in the 12th minute, Julian Draxler did manage to hit someone else's goal, but the referee canceled the goal due to a small offside position in Mbappe, who was giving the pass.

But in the middle of the half, the Parisians have already scored by all the rules.

After playing a set piece, David Alaba cleared the ball out of his own penalty area, but Neymar picked it up and immediately made a fantastic pass to Marquinhos.

The Brazilian, who was not offside, calmly outplayed Neuer.

Almost immediately, the PSG captain had to ask for a replacement due to muscle damage.

Instead, the nominal midfielder Ander Herrera appeared on the field.

Hans-Dieter Flick responded by throwing Alfonso Davis into the fight.

And shortly before the break, the hosts were also left without a main central defender.

Sule was injured and Jerome Boateng took his place on the field.

Forced rearrangements in the opponent's defense and Herrera's departure to a non-core position eventually helped Bayern get back into the game rather quickly.

In the 37th minute, Shupo-Moting outplayed his opponent on the second floor and sent the ball into the net from close range.

Navas was also powerless in this situation.

In the second half, the hosts, as if smelling blood, again pressed the opponent to the goal.

In addition, Diallo's replacement for Mitchell Bakker during the break was not very successful.

The Dutch defender frankly missed the game and could not cope with Zane on the left side of the defense.

At these minutes, Navas again came to the fore, who, with his confident actions at the last line, inspired calmness in his partners.

And they themselves, on occasion, organized dangerous counterattacks.

During one of them, the Parisians almost removed all questions regarding the outcome of the confrontation, but Neuer first coped with Neymar's shot almost point-blank, and David Alaba cleared the ball off the ribbon after finishing off Mbappé.

And in the 60th minute, Bayern still restored the status quo.

Moreover, only the standard position helped the team excel.

Müller, after a perfect serve by Josua Kimmich from a free kick awarded on the right edge, sent the ball into the far corner from close range with his head.

It seemed that the Munich players should finish off the opponent, but instead they very soon managed to miss.

The hosts again could not do anything with the excellent counterattack of the opponent and the incredible speed of Mbappe.

Now the Frenchman, having received a pass from Di Maria, calmly shot from outside the penalty area into the near corner, without encountering resistance from Boateng.

Along the way, the striker with eight goals narrowed the gap in the tournament scorers' race from Erling Holland, who has ten successful strikes.

Bavaria did not have enough energy for a new comeback.

The current winner of the Champions League by inertia went ahead and even created chances, but he could no longer really disturb Navas.

PSG won an important away victory and took revenge for the defeat in the final.

In turn, the Munich team interrupted their 19-match unbeaten run in the main European Cup.

They last lost in the Champions League more than two years ago to Liverpool.

Porto became the main sensation of the first round of the playoffs.

Sergio Conceizau's charges managed to knock out Juventus on aggregate (2: 1, 2: 3).

Then the draw brought them together with a no less formidable opponent - Chelsea, which left no chances for Atlético in the 1/8 finals (2: 0, 1: 0).

However, the Portuguese team intended to surprise the fans once again and for the first time since 2004 to reach the semifinals of the main European Cup.

Unfortunately for the owners, the new confrontation began not in the best way for them.

They conceded two unanswered goals and will now have to score at least three away.

Although the Conceisau team did not deserve defeat in the game.

Chelsea started the match actively, but quickly gave the initiative to the opponent.

The Porto footballers did not allow the guests to launch attacks, regularly including high pressure.

As a result, the charges of Thomas Tuchel crossed the center of the field with great difficulty and practically did not bother Agustin Marquezin.

But the Portuguese team, on occasion, created dangerous moments.

So, Otavio almost sent the ball into the net from the corner of the field, but Edward Mendy saved Chelsea.

In another episode, Andres Uribe shot from outside the penalty area just above the crossbar.

All the more unexpected was Mason Mount's goal in the 32nd minute.

The Englishman took the transfer of Jorginho near someone else's penalty, left the defenders and just shot into the far corner.

Along the way, the midfielder, at the age of 22 years and 87 days, became the youngest scorer in the playoffs in the history of his club.

The second half of the meeting was also dictated by Porto.

The hosts attacked, created chances and even leveled the score.

However, the referee canceled the goal of the most experienced Pepe due to an offside position.

More Mendy did not let the projectile into the net.

As a result, the Senegalese made five saves and played to zero in the seventh match of the current Champions League season.

Only his former team Rennes managed to knock the goalkeeper in the group stage.

And at the end of the match, Chelsea removed all questions about the outcome of the confrontation.

Benjamin Chilwell took the ball away from his opponent at the corner of someone else's penalty area, beat Marquezin and calmly struck another goal.

So the Londoners took a big step towards the semifinals of the tournament.