How good are the North Korean athletes? In addition to Zheng Dashi, there are these legendary players

The planned opening day of the 2021 Tokyo Olympics is about to enter the countdown to the last one hundred days. North Korea recently announced that it will not participate in the Olympic Games due to the protection of the health of its athletes due to the impact of the new crown pneumonia epidemic. Screenshot of the report on the official website of the Korean Ministry of Sports.   A number 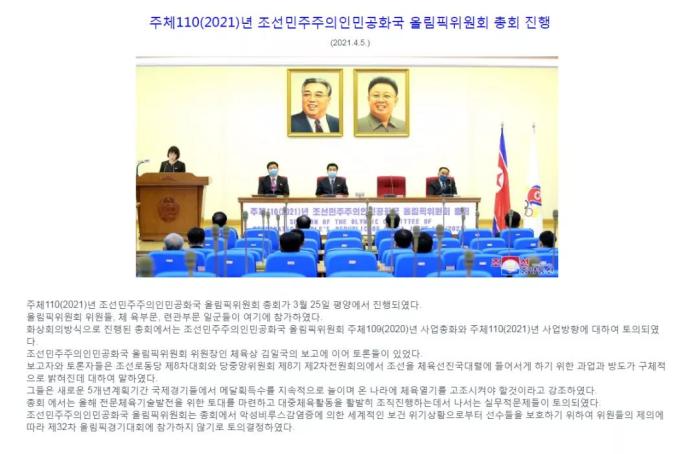 The planned opening day of the 2021 Tokyo Olympics is about to enter the countdown to the last one hundred days.

North Korea recently announced that it will not participate in the Olympic Games due to the protection of the health of its athletes due to the impact of the new crown pneumonia epidemic.

Screenshot of the report on the official website of the Korean Ministry of Sports.

A number of blockbuster test matches were announced to be cancelled, and the torch relay had twists and turns. Now North Korea is absent for some reason, just like dominoes falling one after another, adding another cloud to the prospect of the Tokyo Olympics.

Regardless of whether the Olympic flame can be ignited as desired in the National Arena more than 100 days later, the audience will not be able to see the scene of North Korean athletes competing for gold and silver on the Tokyo arena.

As a "mysterious teacher" who has given birth to many famous sportsmen, North Korea has missed the Summer Olympics again after 33 years. It is an unspeakable loss for the audience or the international Olympic movement.

For many years, the North Korean sports authorities have prioritized ten sports such as "football, marathon, basketball, shooting, boxing, weightlifting, judo and gymnastics".

After years of key training, the above-mentioned projects have also become a breakthrough for North Korean sports to expand its territory in the international sports arena.

Like the Chinese delegation, North Korea’s blockbuster in the Olympics and won its first gold medal also came from the shooting range.

In the 1972 Munich Olympics, the North Korean delegation participated in the Summer Olympics for the first time.

In the small-caliber rifle shooting competition, Li Haojun broke the world and Olympic records at the time with 599 points and won the gold medal.

The gun fired the North Korean Sports's up-and-coming charge in the Olympics.

At that time, the media from various countries described the groundbreaking game with descriptions such as "unexpected imagination", "a global sensation, unprecedented", and "unexpected victory".

If you want to count North Korea’s most eye-catching sports so far, it’s the weightlifting, which is famous for its strength.

In the past 49 years, of the 16 Olympic gold medals won by the North Korean team, 5 gold medals came from this event.

In the 1992 Barcelona Olympics, North Korea achieved 4 golds and 5 bronzes, which was the best result in all previous Olympics.

Since then, North Korea has been eager to surpass this result, but the best result after that was in Atlanta in 1996 and Beijing in 2008, with two gold medals each.

In the men's 62 kg weightlifting competition at the London Olympics, North Korea's Kim Eun Guk won the gold medal with a total score of 327 kg and broke the world record.

It was not until the 2012 London Olympics that the North Korean team broke out in the weightlifting arena, allowing them to once again reach the heights reached by their predecessors 30 years ago.

North Korean athlete Yan Yunzhe successfully lifted 168 kg in the clean and jerk stage, which is equivalent to three times his own weight and broke the Olympic record.

In weightlifting, three times your body weight is considered a limit.

The sentence he left after the game "I want to lift enough weight to deter other players" also deeply reflects that North Korean athletes have always been eager to prove their determination and perseverance in the international arena.

The gold medalist of the men's vaulting horse at the Rio Olympics and North Korean gymnast Li Seguang is a soldier of the "4.25 Sports Team".

As the second men's gymnastics championship of North Korea after Bae Gil-soo won the pommel horse championship at the Barcelona Olympics, Lee Se-kwang's road to fame has gone through two Olympic cycles.

After the Beijing Olympics, Li Shiguang began to make remarkable progress in the vaulting event.

In 2009, he successfully made a new action with a difficulty of 7.2 points. This action was named after him. The difficulty is second only to the highest difficulty of Korean player Yang Heshan with 7.4 points.

After successfully reaching the summit in Rio, Li Shiguang said in an interview after the game: "The gold medal is meaningless to me personally. This is a gift to the country." He said: "The gold medal brings the joy of victory to the motherland, the army and the people. Thanks to my coach and teammates, I believe it can encourage young North Korean gymnasts." The words are short and powerful.

In addition to fighting for the faith in the heart, in North Korea, winning a gold medal will also be a great honor.

In 1999, Zheng Sung-yu won the gold medal in the 7th World Track and Field Championships women’s marathon, becoming the first athlete in North Korean history to win the gold medal in the World Track and Field Championships. Pyongyang held the "Millions of People Welcome Zheng Sung-yu" conference, and the athletes also received cars and houses. And other rewards.

Not only that, Zheng Chengyu also won the titles of "Hero of the Republic" and "People's Athlete", which is the highest title given to athletes by North Korea.

The North Korean delegation has been veiled with mystery, perhaps because they rarely interact with the outside world.

During the competition, the North Korean delegation has always kept a low profile.

But at the 2010 World Cup in South Africa, the image of a vivid and patriotic North Korean athlete infected fans all over the world through TV screens.

Before the match against Brazil, the melody of North Korea's national anthem broke through the loud sound of the audience Vuvuzela, and reverberated through the World Cup after 1966.

When North Korea’s number one star, Zheng Da-se, finally fulfilled his dream of playing for the World Cup for his motherland, he burst into tears and buried his head, leaving the shoulders of the world trembling violently.

Excited and sighed, after too long of hard work and waiting, he finally saw his dream come true.

This scene is awe-inspiring. The "Rooney of the People" reveals its sincere feelings, allowing North Korean athletes to show their emotional side to the world.

International Olympic Committee President Bach once said that the Tokyo Olympics carries the dream of 11,000 athletes.

However, under the invasion of the epidemic, the absence of the North Korean team is helpless and difficult to change, and it will eventually make the midsummer of 2021 missing a corner.

Fortunately, a short departure also means that we will finally have a reunion day. The word "goodbye" spoken today also left a seed called "expectation".