Five quads by Trusova, triple axel by Tuktamysheva and Kolyada's chances: the main intrigues of the World Figure Skating Championships

The World Figure Skating Championship starts in Stockholm on March 24. In addition to medals, it will compete for quotas for countries for the Winter Olympic Games in Beijing. The Russian national team will traditionally be one of the favorites of the competition and will be able to claim victory in three disciplines. RT talks about the intrigues of the main tournament of the season. 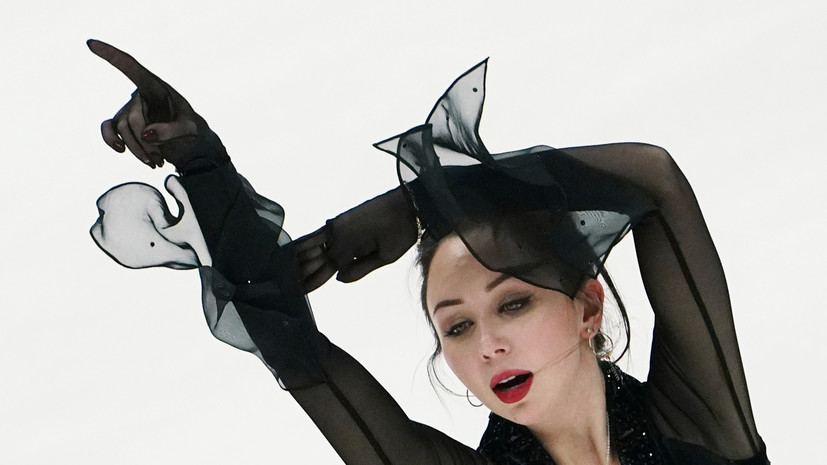 Will Trusova and Tuktamysheva be able to win medals?

Anna Shcherbakova goes to Stockholm as the main favorite of the women's competition.

This season she has struck an amazing balance between the technical complexity of the programs, choreography and her own stability.

Only Kamila Valieva could argue with her - she was the only one who surpassed the three-time champion of Russia at the Channel One Cup, but due to her age she will not be able to perform at the World Championship.

As for the rest of the Russians, their chances not only for gold, but in general for medals should be assessed carefully.

Alexandra Trusova and Elizaveta Tuktamysheva will certainly fight for the highest places, but this season they could not declare themselves as skaters who always cope with their programs.

To a greater extent, this applies to Trusova.

Rarely does her performance do without breakdowns on her signature quadruple jumps.

A 16-year-old skater has to either simplify her programs, then take risks and include more ultra-si elements in them, which does not always lead to the desired result.

The last performance of the student Evgeni Plushenko at the Channel One Cup ended in mistakes on two quadruple lutz, which deprived her of all possible advantage.

Tuktamysheva cannot boast of stability either, for which this world championship will be the first in six years.

Actually, this fact of a sports biography in itself speaks of how rarely Alexei Mishin's ward manages to get together and give out her maximum, despite the fact that the triple axel all this time allowed her to be competitive against the background of any rivals.

Success in Stockholm largely depends on whether the 24-year-old athlete will be able to perform the crown jump all three times, as well as on how the judges will accept her programs - in two years she has already accumulated seven different performances with a conditional rate of four.

If, nevertheless, Trusova or Tuktamysheva make too serious mistakes, then the rivals will not doze.

Japanese Rika Kihira has mastered the quadruple salchow this season and continues to confidently perform the triple axel.

At the national championship, she scored a fantastic 234.24, although she did not include the valuable enough triple lutz in the free program.

In addition to Kihira, the Russian women will be threatened by the American Brady Tennell, who not only can be considered a more stable skater than Shcherbakova, but is also a real favorite of the judges.

Will Kolyada impose competition on Hanyu and Chen?

In men's single skating, there are three clear favorites at once, which stand out from the general row of participants in the world championship.

The extent to which each of them surpassed their compatriots already suggests that hardly anyone else will be able to get close to the podium.

At the same time, it will be extremely difficult for Kolyada to claim a place higher than the third.

In technical terms, he is still noticeably inferior not only to Chen and Hanyu, but also to many other skaters.

This season, the Russian skater could only add salchow to the standard for men quadruple sheepskin coat.

Lutz, which he performed in previous years, is still in reserve.

Kolyada tries to compensate for the lag in technique with outstanding choreography.

In comparison with Hanyu and Chen, he received higher components, and not only at the national championships, but also at the Grand Prix stages, where the refereeing had to be more strict.

This factor should not be underestimated: although it is no longer possible to win the World Championship by skating alone, it can still bring a medal.

The Russian will have a chance to argue with the American and the Japanese when he nevertheless improves his content and adds at least a quadruple lutz.

Perhaps, already in Stockholm, he will try to revive this jump, although it will be a very risky step for him.

Considering how long he had been carrying the quadruple salchow, it is still not worth waiting for a technical revolution from Kolyada.

Will Semenenko get three Olympic quotas?

He can be called one of the most unexpected participants in the World Championship.

Prior to this season, the 17-year-old athlete only played twice in international tournaments - at the junior Grand Prix stage back in 2017 and the Tallink Hotels Cup last year.

Before Semenenko, the youngest Russian figure skater at the world championships was Evgeni Plushenko, who won bronze in 1998 at the age of 15.

At the Russian Championship in Chelyabinsk, Semenenko took 11th place and could hardly count on getting into the national team, but thanks to the coronavirus pandemic he still got his chance.

After the cancellation of the European Championship, it became necessary to conduct an additional selection for the team, which was arranged in the final of the Russian Cup.

Semenenko, in the status of the national champion among juniors, won an unexpected victory and, according to the sports principle, received a ticket to Stockholm.

It's difficult to talk about the medal prospects of yesterday's junior.

He performs in his programs only one quadruple toe loop and a salchow - many skaters have much more complex content.

In addition, Eugene is completely unaware of the judges, which is why he may not get points for the components - this often happens with beginners.

Questions may arise already for the short program, where Semenenko skates to the song "The City That Doesn't Exist" from the series "Gangster Petersburg".

The composition contains words in Russian, which is a rarity for major tournaments.

The judges may simply not evaluate the choice of the athlete, considering it a violation of unspoken traditions, although they should be familiar with the music - Plushenko performed under it in the 2002/03 season.

For Semenenko, the more promising is the fight not for a medal, but for the third quota for the country at the Olympic Games.

The athlete himself may not care about whether the team will receive full representation in men's skating, but for the fans this is a very important question.

To win three vouchers, the sum of the places of Kolyada and Semenenko should not exceed 13, that is, if one athlete manages to get on the podium, the other will need to enter the top ten.

Semenenko is quite capable of doing this if he performs without mistakes and makes a good impression.

Will Russia return gold in pairs?

Since Soviet skaters began competing at the world championships, the longest gap between victories for Russian couples has been eight years.

Exactly the same amount has passed since the last success of Tatyana Volosozhar and Maxim Trankov.

In Stockholm, this losing streak will either finally end or turn into an anti-record one.

There is a chance that the first option will come true.

This season, Russian pair skating not only did not lose its positions, but also stepped far ahead.

Alexandra Boykova and Dmitry Kozlovsky have not shown themselves so brightly recently, but they also had an excellent performance at the Grand Prix stage.

At the same time, the reigning world champions from China, Sui Wenjing and Han Cong, did not go out on the ice at all all season due to a partner's injury and his hip surgery.

Now their condition is one of the main mysteries of figure skating.

Apart from them, hardly anyone else can prevent Russian couples from returning to the highest step of the podium.

If Sui and Han are in optimal shape and perform with the same emotional performances as two years ago, they will definitely impose a fight and remain contenders for gold.

Who will take the dance throne instead of Papadakis and Sizeron?

The dance tournament will be held without the best duo of recent years, Gabriela Papadakis and Guillaume Sizeron.

Four-time world champions from France announced that the coronavirus pandemic has affected their training process too much, as a result of which they decided to focus on preparing for the Olympic Games now.

The circle of applicants for gold is quite wide and includes several duets from Russia, the USA and Canada at once.

The first on the list of favorites are Victoria Sinitsina and Nikita Katsalapov, especially since in 2019 they were already the best after the French, and a year ago they even surpassed them at the European Championship.

But this season, the couple lost a lot of time preparing due to injuries and illnesses.

Alexander Zhulin's wards even qualified for the World Cup only at the last moment thanks to their victory in the Russian Cup final.

On it, they demonstrated that they remain the best duet in the country: their score of 223.12 points was higher than the one with which Alexandra Stepanova and Ivan Bukin excelled in Chelyabinsk.

It is very important for dancers to always remain in sight, and this is precisely what Sinitsina and Katsalapov had problems with.

North American duets are traditionally strong in ice dancing, and there is no doubt about their readiness for the World Cup.

Madison Hubbell - Zachary Donoghue and Madison Chock - Evan Bates at the last US championship fought with each other at sky-high heights and did not lose shape during the pandemic.

Canadians Piper Gilles - Paul Poirier did not have full-fledged competitive practice, but they have vast experience of performing at major tournaments and programs that have survived from last season.