Kayo's removal in the opening, Tyukavin's double and Zakharyan's pass: how Dynamo bounced back from 0: 2 and beat Krasnodar in the RPL match

Dynamo won a strong-willed victory over Krasnodar on the road in the 23rd round of the RPL. The southerners opened the scoring already in the 11th minute, and at the very beginning of the second half they doubled the lead. Yuri Gazinsky scored a goal in the third meeting in a row. However, the blue and white managed to make an impressive comeback. The substitute, 18-year-old Konstantin Tyukavin, scored a double, while Daniil Fomin, a southerner's pupil, upset the former club. At the same time, the owners of most of the confrontation were forced to act in the minority due to the removal of Cayo Pantalean. 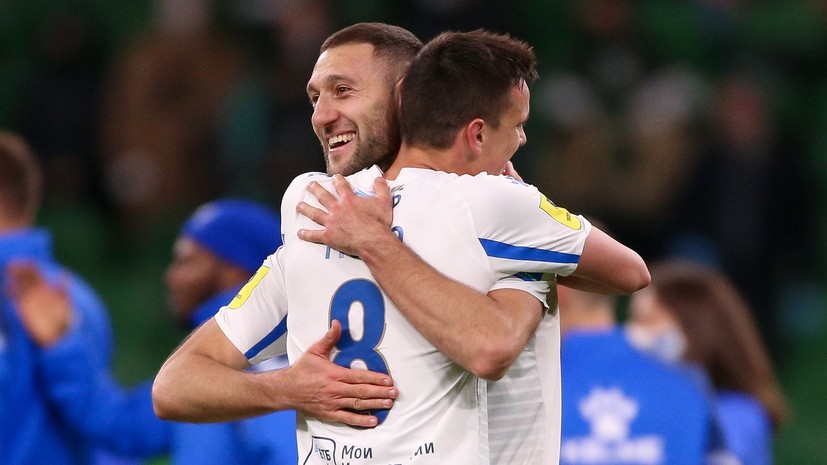 Increased density in the standings

Despite the defeat of CSKA by Zenit on Wednesday, the situation in the RPL standings remained as confusing as possible.

In particular, on the eve of the 23rd round, the last one before the pause for the national teams, the fourth place was separated from the tenth by only five points, and even Khimki, who were in the relegation zone at the beginning of the season, did not lose their chances of getting into European cups.

Dynamo and Krasnodar are also part of the vast group of teams claiming the coveted four.

The teams started the year differently.

The blue and white won two victories in the national championship and knocked out Spartak from the Russian Cup.

Southerners not only flew out of the Cup of the country and the Europa League, but also lost the most important points in the confrontation with the "Ural" and "Spartak".

And only in the 22nd round Murad Musaev's wards finally managed to win their first victory in 2021 - they simply had no right to misfire in a meeting with Tambov.

Sandro Schwartz's team, on the contrary, lost their way, losing in the derby to Spartak, but showed good football, and therefore the fans had the right to count on success in Krasnodar.

Serious personnel problems of the owners also spoke for this.

Due to injuries, Alexander Martynovich, Christian Ramirez, Sergey Petrov, Dmitry Stotsky and Ari could not enter the field.

On the eve of the match, Matvey Safonov returned to training, but he has not yet gotten in shape and remained in reserve.

The top scorer of the Southerners Marcus Berg, who has returned to service, is also on the bench.

Dynamo was preparing for the game with its full complement.

As a result, Musaev made only one substitution in the roster compared to the meeting with Tambov.

The place of Magomed-Shapi Suleimanov on the right flank of the attack was taken by Wanderson.

Schwartz also performed one castling: Guillermo Varela, not Sergey Parshivlyuk, was on the right edge of the defense.

A great start for Krasnodar

From the first minutes it became clear how both teams were going to act.

As expected, Krasnodar relied on control of the ball, while Dynamo counted on quick counterattacks and a bright young troika in attack represented by Daniil Lesovoy, Vyacheslav Grulev and 17-year-old Arsen Zakharyan.

However, at the beginning of the match, the players of the youth national team of Russia were not very noticeable, while the owners were weaving combinations right next to someone else's penalty area.

More often they tried to get inside from the right flank, taking advantage of the mistakes of the former defender of the southerners Dmitry Skopintsev.

But the goal came from the left semi-flank.

Musaev's wards played a proprietary three-move, and Wanderson made a cross from the front into the area of ​​someone else's goalkeeper.

Anton Shunin, probably, was sure that the ball went out of bounds, and therefore was late with the throw and only corrected the projectile on Tonny de Villene's leg.

The episode also slept through Nicola Moro, who allowed his opponent to calmly hit someone else's goal.

It seemed that the game started perfectly for Krasnodar, but the team was once again let down by Cayo Pantalean.

Already in the eighth minute, he received a yellow card for hitting the legs of Sebastian Shimanski.

After that, the Brazilian should be as careful as possible, but after only ten minutes he ran Grulev behind him and knocked him down near his own penalty area.

Judge Vasily Kazartsev had no choice but to remove the offender.

Musaev had no choice either.

Of the central defenders, only 19-year-old pupil of the club academy Vyacheslav Litvinov was on his bench, having played only one match for the first team before.

He went into battle.

And Remy Cabell had to change.

The Frenchman left the field with an extremely displeased look.

Well, the southerners switched to football that was absolutely unusual for themselves: they sat in their own penalty area and relied on counterattacks.

But the team has never been distinguished by the harmony of the defensive ranks, and therefore dangerous moments began to arise at the gates of Yegor Baburin one after another.

At first Varela miraculously missed the target from within the penalty area.

Then Zakharyan threatened the other's gates a couple of times.

Next Baburin coped with Skopintsev's shot into the far corner.

He, with his fingertips, turned the ball into the post after another strike by Zakharyan.

In total, the blue and white in the first half struck 12 shots, five of which were on target.

However, at the beginning of the second half, Krasnodar scored a second goal that did not follow from the logic of the game.

The southerners took advantage of the opponent's mistake in the center of the field and launched a swift counterattack.

Ionov from the right flank performed a cross to the penalty line, from where Yuri Gazinsky delivered an accurate hit to the touch.

Shunin reached for the ball, but failed to block his way into the net.

And the midfielder of the Russian national team scored a goal in the third RPL match in a row.

Dynamo were not going to give up.

Schwartz immediately carried out competent tactical restructuring, which helped his team to turn the tide of the match.

He replaced the not very successful Skopintsev with a young striker Konstantin Tyukavin and switched to a game of three defenders.

At the same time, Moro went down to Ivan Ordets and Roman Evgeniev, who was actually responsible for starting the attacks.

Varela and Lesovy were called to close the flanks, and Zakharyan moved closer to the center of the field.

And these permutations turned out to be fateful.

The blue and white pressed the opponent to the goal, and Musaev's wards were unable to oppose them with anything.

The goal was not brewing for long.

Already in the 58th minute, a pupil of Krasnodar, Daniil Fomin, spun the ball from the penalty line into the far corner of the former team's goal.

Baburin in a beautiful jump tried to rectify the situation, but making a save in this situation was unrealistic.

On the courage, the guests rushed forward with redoubled energy.

Musaev frantically tried to take at least some action.

Instead of the tired Vilhena, he released Kristoffer Olsson on the field, but this did not help much.

Zakharyan was especially good, who opened first in the center, then on the right edge and invariably gave accurate passes to his partners.

It is not surprising that it was his cross that helped the Muscovites to recoup.

After a good pass from Clinton's substitute N'Zhier, Arsene made an excellent diagonal to someone else's penalty area from the flank, and young Tyukavin sent the ball into the far corner with his head in the fall.

Litvinov was unable to restrain the attacker.

Musaev was forced to go all-in and release two fresh footballers Daniil Utkin and Suleimanov at once.

It even helped for a while.

Krasnodar pushed the game a little away from their own goal and carried out several promising attacks.

But Dynamo no longer agreed to a draw and still put the squeeze on the southerners.

And again the young Litvinov turned out to be the weak link in the hosts' defense.

Ten minutes before the end of regular time, he flew away from Tyukavin in a fight and allowed the attacker, turning around his own axis, to score the second goal.

So the 18-year-old striker scored a double, coming on as a substitute.

Kazartsev, however, after consulting with the assistants at VAR, went to watch the replay, but still decided that the forward played with his elbow within the framework of the rules.

The referee added five minutes to the main time of the match, but the demoralized hosts had no chance to escape.

On the contrary, Dynamo almost scored the third goal.

Thus, the blue and white won a third victory in the last four RPL matches and rose to fifth place.