Forbidden knee and title loss: why the fight between Ian and Sterling ended in scandal

Piotr Jan failed to successfully defend his first UFC bantamweight title. In the fourth round, the Russian fighter inflicted an illegal knee blow to the head of Aljamein Sterling, who was in a prone position. The native of Yekaterinburg was disqualified and stripped of the belt. At the same time, the American was upset by such an end to the fight and threw the trophy to the ground. 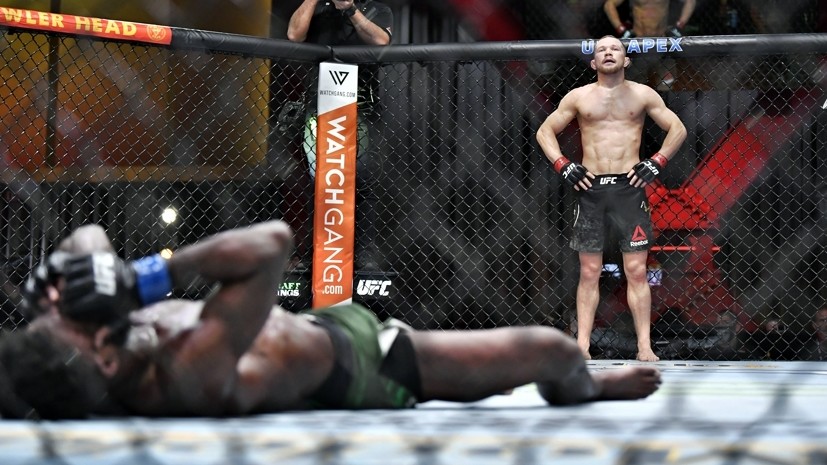 On paper, Peter Jan's first defense of the bantamweight title promised to be difficult.

As you know, fights make styles, and Aljemein Sterling seemed not the most convenient opponent for the Russian.

Yes, in the standing position he was inferior to the champion, but he was able to create many problems for him on the ground.

A black belt in Brazilian Jiu-Jitsu and performances in the third NCAA wrestling division were proof of this.

Besides, for Ian, the meeting with Sterling should have been a real test of strength.

Despite a solid track record of 16 battles, the Russian has never fought such a dangerous opponent in his career.

By the time of their battle, Jose Aldo and Yuraya Faber had already passed their peak, John Dodson was in an uncomfortable weight class for himself, and Jimmy Rivera was always no more than an average fighter.

Therefore, although I was considered the favorite of Peter, neither the fans nor the experts had absolute confidence in his success.

In particular, Vadim Finkelstein, the president of M-1 Global, shared this opinion.

“Ian has never met anyone more dangerous than Sterling.

At least because the Brazilian is not the same - the years take their toll.

This does not happen, "Finkelstein told the Championship.

As for the fighters themselves, on the eve of the bout, Yang looked more confident in his abilities.

This manifested itself both during the final press conference and the weighing procedure, which ended in a duel of views.

Peter was calm, but at the same time showed with all his appearance that he considered himself stronger than Aljamein, while Sterling at times looked a little confused.

Even the attempts of trash-current did not help, none of which was able to touch the Russian to the quick.

He acted passively and preferred to step back, allowing Sterling to act as the first number.

The American made good use of this advantage, noted a good front kick to the body, but the most striking were his knee strikes to the head.

It might seem that the second is capable of provoking a knockdown, but the Russian survived.

The second half of the five-minute was left to Ian, and Sterling was on the canvas four times.

First, Peter intercepted the kick of Aljamein and carried out a sweep, and then completely knocked him down.

The right straight line fell exactly in the jaw of the American and seated him on the canvas.

Once again, he fell as a result of a filigree low-kick under the supporting leg and a takedown.

The Russian showed that he was also good at wrestling and "stuck" his counterpart with his head on the floor.

Despite this, in general, Sterling had a good first segment and exceeded the expectations of many fans.

In terms of significant strikes, he almost doubled Yan (27:14) and also brought in a takedown.

Despite all this, there was no confidence in his actions.

He fussed a lot, often "failed" and remained in a half-position.

In the second segment, his mistakes did not disappear anywhere, but the rate on the fight helped to reduce their number.

Peter mostly had to defend himself from passes to the legs and work in a clinch at the net.

Starting in the third round, Ian began to pick up the pace.

Sterling got a little tired and allowed the champion to act first.

Peter began to actively process Aljamein's legs and more and more hit the head of his counterpart.

It was in this five-minute period that he surpassed the challenger for the first time in the number of significant strikes (30:29), and also issued three takedowns.

In the fourth segment, Jan continued to develop the advantage.

His kicks looked unaccented, and due to fatigue, he could not get through to his legs.

It seemed that he was in a hopeless position and was in danger of losing early soon, but everything turned out differently.

Aljemain found himself on the floor and received an illegal knee blow to the head.

According to UFC rules, grounded is a fighter touching it with more than two points.

This is entirely consistent with Sterling's position.

On the floor were two of his feet, as well as his right knee.

In this regard, Yang doubted for a long time whether it was worth striking and even asked his corner.

But to my surprise I received an affirmative answer, which turned out to be fundamentally wrong.

All this time Sterling lay on his back, making only occasional attempts to get up.

At the same time, he was conscious and, apparently, hoped that he would be able to continue the battle.

However, the doctor invited to the octagon turned out to be of a different opinion.

He conducted an examination, talked with the applicant and stated that he was not ready to fight.

Out of frustration, Aljemain could not contain his emotions and burst into tears.

At this point, it was crystal clear that Yang would be disqualified for a prohibited knee to the head. The only intrigue was whether he would be deprived of his belt, or the fight would be declared invalid. But in the end, the UFC management decided to take away the title from the Russian and declare Sterling the new bantamweight champion. It is worth noting that the Absolute Fighting Championship trophy did not change its owner in this way before. Aljemain clearly did not want to be the first on this list, so in his hearts he threw him to the ground.