Dubli Sobolev and Larsson and the first goal of Promes after his return: how Spartak defeated Krasnodar in the 21st round of the RPL

The capital "Spartak" defeated "Krasnodar" in the 21st round of the RPL - 6: 1. Quincy Promes scored the first goal after returning to Russia. Jordan Larsson and Alexander Sobolev made doubles. Ezequiel Ponce also noted. For the first time in their entire performance in the elite division, the Southerners conceded six goals. 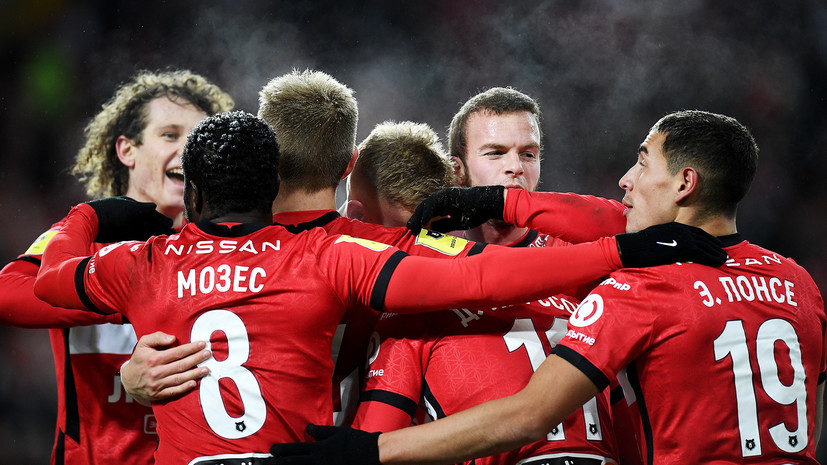 Spartak and Krasnodar approached the face-to-face confrontation in Moscow not in the best psychological state.

The Southerners flew out of the Russian Cup and the Europa League, and then almost lost to Ural in the RPL (2: 2) and missed the opportunity to close the gap with the European Cup zone.

In turn, the Muscovites also finished their performance in the Russian Cup and lost at home to Rubin in the national championship - 0: 2.

This defeat was the third in a row for the red and white in the championship and the fourth in all tournaments and threw them to fourth place.

However, on Sunday, Domenico Tedesco's wards had an excellent opportunity to return to the victorious path.

The reason for this is the opponent's serious staffing problems.

The team of Murad Musaev also went to the game with Ural without a number of leaders, but in the course of this match lost three full-backs at once: Igor Smolnikov, who was sent off, and Sergei Petrov and Ambrauz Oyongo, who were injured.

The central zone of protection of the Kuban also suffered losses.

In the person of Alexander Martynovich, the southerners lost not only the key destroyer, but also the team captain.

This made the guests vulnerable in positional defense and standards, since it was the Belarusian who commanded the general interactions in the four.

Plus, the veteran had a tangible load of horse wrestling.

In addition to the named players, Matvey Safonov, Christian Ramirez, Dmitry Stotsky and Markus Berg did not come to Moscow.

Scattering of moments in the first half

In the fight, many questions about the winner disappeared already during the starting quarter of an hour.

"Spartak" began the meeting with the highest intensity pressure in the center of the field, in which even the nominal defender Samuel Gigot had time to take part.

This allowed the hosts not only to stop the opponent's offensive at the initial stage, but also to deploy their own attacks in the direction of the flanks - the most vulnerable spots in Krasnodar's formations.

The result of this pressure was two quick goals from Tedesco's team.

Already in the first minute of the match, Nail Umyarov joined on the left flank to the fast offensive of "Spartak" and from the area of ​​responsibility of Alexei Ionov gave a scoring pass for Alexander Sobolev, who was celebrating his 24th birthday.

The nominal forward of Krasnodar, as a right-back, played several matches at Zenit, played in a number of preseason matches and even ended a meeting with Ural.

But, obviously, he did not fully master the functionality, giving his opponent enough space and time for a verified diagonal.

Sobolev closed it up, surrounded by three opponents, but without real resistance - in the absence of Martynovich, there was no one to “clean” the top of “Krasnodar”.

And, as a result, the fastest goal of the 2020/21 championship took place.

According to a similar scheme, the Muscovites doubled their advantage.

With the only difference that a high-speed counterattack was developed on the right edge, and Jordan Larsson, instead of a top pass, used a low pass.

Having moved to the center, the Swede drew the attention of the central defenders of the “bulls”, forced Yegor Sorokin to break the line of an artificial offside and laid out a perfect pass on the foot of Quincy Promes.

The forward, who was face to face with the goalkeeper, easily outplayed Stanislav Agkatsev and scored his first goal after returning to Spartak.

Having created a comfortable groundwork, the Muscovites slowed down the pace, lowering the pressure height.

This is what Musaev's team began to use.

If at first the guests could hardly break Tedesco's three attackers, and then powerlessly rested against the three central defenders, then minutes from the 20th exit from the defense began to turn out much more productive for them.

And after the replacement of the injured Ari by Magomed Shapi Suleimanov, the attacking game began.

The bulls took Wanderson's individual skill as a basis.

Ionov's flank connections and the offensive from the depths of Gazinsky became the superstructure.

By the end of the half, Krasnodar could have scored a full-fledged goal from a set of half-chances.

But every time the implementation failed.

Spartak's four goals in the second half

The southerners broke through after the break: in the 56th minute, Yuri Gazinsky put all his anger for wasted chances into a kick from outside the penalty area - and “tore the web” from the right nine of the gate of Alexander Maksimenko.

The goal turned out to be both spectacular and well-deserved.

After all, it was preceded by the offensive of "Krasnodar" across the entire width of the field, stretching the defense of the Muscovites.

That is why the safety net of the red and whites belatedly rushed to block the shots from the limits of their own penalty area - in an effort to cover the opponent, Tedesco's players threw positions and lay in front of the ball.

When there was no solid line left from the defense of "Spartak", Gazinsky powerfully fired from the rebound zone without interference.

2: 1 - and "Krasnodar" on emotions and drive tried to increase the attacking momentum.

But instead of gaining control over the ball, he finally lost the match.

With a difference of two minutes, Musaev's team ran into exemplary counterattacks implemented by Sobolev and Larsson.

“Spartak” conducted them according to the classical scheme: carrying out to the edge with synchronous acceleration of attacking players from the depths, timely transfer to the forward and his accurate shot after going one-on-one with the goalkeeper.

The central defenders of Muscovites cut off almost the entire opposing team: with the third goal - after an interception in the penalty area, with the fourth - after an unsuccessful corner draw by the guests.

Realizing that the match can only be saved by radical decisions, Musaev made a triple substitution at once.

But really none of the fresh footballers showed themselves positively.

But Andreas Hinkel, who ran Spartak instead of Tedesco, guessed at least with Ezequiel Ponce.

Just six minutes after coming on as a substitute, the forward responded to Alex Kral's pass from the flank and once again reminded Krasnodar and its fans why Captain Martynovich is considered indispensable in the bull system.

The final point in the defeat of the guests was put by Larsson, who made a double.

The goal, perhaps, turned out to be discreet (finishing off after a long-range strike from Moses), but indicative.

After all, even in the 83rd minute, "Spartak" acted intensively, transferring the ball from flank to flank under the connection of the full-backs.

While the center at the same time was filled with five football players in red and white T-shirts, running from the depths at high speed.

Representatives of Krasnodar did not keep up with the opponent's maneuvers.

The victory allowed Spartak not only to regain the third place in the standings and continue the pursuit of CSKA and Zenit, but also to give positive emotions to Oleg Romantsev.

Before the starting whistle, the team took to the field in special T-shirts with wishes of health to the legendary coach who underwent heart surgery.

During the meeting, one of the stands was decorated with a banner "Oleg Ivanovich, health."

“Krasnodar” will have to seriously comprehend what happened, because the southerners, for the first time in their performances in the RPL, conceded six goals in a single match.