It was a new nightmare for Charlotte Kalla in Oberstdorf. After a heavy start on the final three miles, she chose to get off and interrupt the race after just under 10 km. 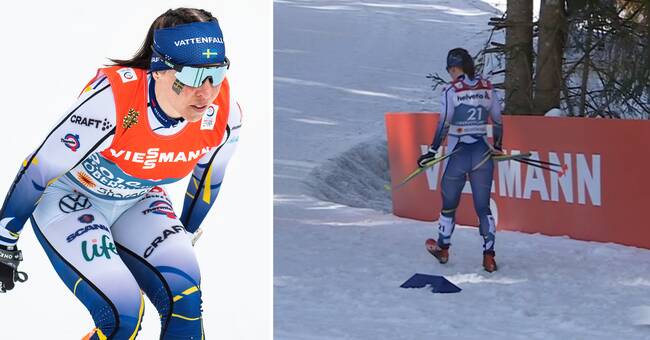 Charlotte Kalla got no revenge from her nightmare stretch in the relay.

At the end of the WC for the ladies over 30 km classic, Kalla was already after 7.6 kilometers a full two minutes behind the leading Therese Johaug - then in place 36 of 41 starting skiers.

- A sad end to a World Cup that has included two very nice races, says SVT's commentator Jacob Hård when Kalla picked up the skis in his hand and walks alongside the ski track.

- She showed at the beginning of the championship that she is fantastic at doing the very best when it is most important.

Then the conclusion did not turn out to be something that neither she nor anyone else had hoped for, adds expert commentator, Anders Blomquist.

"We can not take a chance"

- Charlotte felt a little in her stomach this morning that something was not quite right.

She tried anyway but she felt quite early that it did not work.

She never wants to break a race, it is the worst thing there is and it is certainly difficult for her but we can not take a chance with such a thing, Byström says to SVT.

The three-mile race is taking place where the Norwegian Therese Johaug has a large lead.