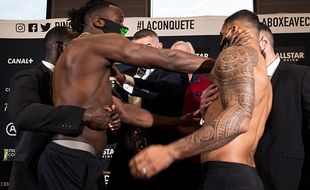 Tony Yoka took a small slap in the face by Joel Tambwe Djeko during the weigh-in on the eve of their fight, on March 5, 2021 in Nantes.

It's not yet the one he's dreaming of, but French heavyweight Tony Yoka still has the opportunity to afford his first professional belt against Belgian Joel Tambwe Djeko for the vacant European Union title. , Friday.

A meeting that promises to be "an explosive fight", to use the words of Jérôme Abitboul, promoter of Yoka.

Already, Thursday afternoon, during the weigh-in, the two men almost came to blows and were separated by their team.

The Belgian indeed delivered a slap to the Olympic champion, who tried to reply but was stopped by the guards.

A story of feet a little too big

A few minutes later, still furious, Yoka did not want to speak out at a press conference.

"Nothing happened," he replied dryly, promising: "We would settle that tomorrow [Friday] in the ring".

He still put on a little layer just after, talking about the difference between him and his opponent.

“Today I saw someone who knows his boxing, spectacular, and another always in the show and aggression.

It makes me want to win even more, ”he said, promising“ a great victory ”.

A little later, once the pressure subsided, Joël Tambwe Djeko told L'Equipe why he had done that.

I have big feet: unwittingly, I stepped on her toe.

There I said to myself: "Too late. If I take my foot off, he will think that I am afraid of him, take a psychological advantage."

There, he said to me: "Do not approach me like that!"

So I got under pressure.

I come from the street myself, do not warm myself!

He had not hesitated before, had the Frenchman well chambered.

Asked what was being said about Yoka in England, he replied: “I'm going to be frank, when I said around me that I was going to meet Tony Yoka, I who have English coaches, they did not know.

I had to tell them that it was the Olympic champion ”.

Producer beaten up in Paris: "These bad apples must answer for their actions", claims Tony Yoka