Johaug: I'm not getting better than this

On Saturday, she can take her fourth World Cup gold in Oberstdorf and step up as one of the biggest in ski history. Therese Johaug is still superior, but sends a reassuring greeting to Frida Karlsson and the others. She can not get better than this. - There is probably not much more to take off, if I am to be completely honest, Johaug says to TT. 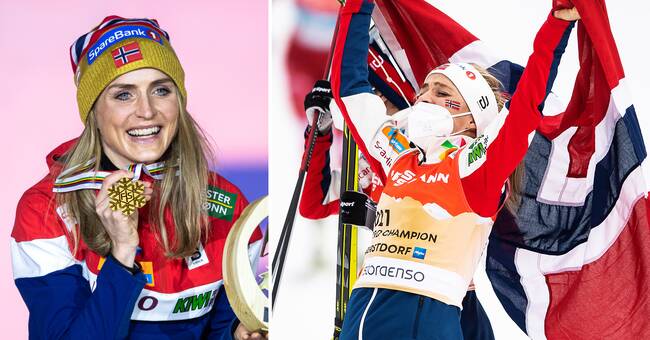 The 32-year-old Norwegian superstar is the big favorite for the gold in Saturday's three miles, the distance she also won in 2011, 2015 and 2019. If she keeps up the pressure, she will go up to an incredible 14 World Cup golds in her career and 19 World Cup medals in total.

That would take her past the Russian Jelena Välbe (14 gold, a total of 17 medals) and up to second place in World Cup history.

Only compatriot Marit Bjørgen (18 gold and 26 medals) is better.

- Haha, I still have a little bit left up to Bjørgen, says Johaug and waves away the comparison.

It's not something I go and think about like that, but I'm proud of what I've experienced during my career.

The best race of his career

She made her World Cup debut as an 18-year-old in Sapporo in 2007, and immediately showed her front feet with a bronze on the three-mile.

In Liberec two years later she lost a medal, but since then there have been three or four medals, mostly gold, at each championship she competed in.

- I am very happy with the championships I have done in recent years.

It is not a given that you have to perform on the few days that a championship takes place every two years.

But I am very proud of myself that I have managed it, says Johaug.

Without the great resentment - an 18-month doping ban that caused her to miss the World Cup in Lahti 2017, among other things - there would probably have been even more championship medals in the account.

But without the suspension, she probably would not have been as good as she is now.

She devoted the forced break to training, training and training again.

According to her, that is the reason why she is the best skier she has ever been to during the WC in Oberstdorf.

The results also testify to that: gold in skiathlon, gold in 10 km freestyle and gold in relay.

TT: Have you ever been better?

- No, I feel in very good shape and I feel that I have constantly developed, even the last two years.

I probably did my best freestyle race in my career the other day, so I'm in good shape.

TT: How much better can you get?

- There is probably not much more to take off, to be completely honest.

Somehow I feel that I have come to a point where there are very, very small margins to develop further.

And I know that the younger girls have a lot to go on.

However, the challengers cannot count on Therese Johaug resigning in the near future.

It does take a year at a time these days, but given what she's still accomplishing, it's a while before the skis go on the shelf.

The only thing she can say is that the World Cup at home, in Trondheim 2025, is on the border.

- Well, it's probably a little far away for me.

But you should never say never.

In the meantime, Frida Karlsson, Ebba Andersson and others who want to poke the ski queen from the throne can lie in. Because there is only one way to the top, Johaug says.

TT: What should the others do to catch up with you?

- It is many years of training that gives these results over time.

I was not so good when I was the same age as Frida and Ebba are now.

So there are many, many years of training.

As simple as that.

Here Norway jumps into the interview: "Had not done the same" Photo: NRK / Bildbyrån.