The best defense in Europe and the only Russian in the playoffs: what are interesting about the matches of City and Atalanta in the 1/8 finals of the Champions League

The Champions League playoffs will continue with the meetings in Budapest and Bergamo on Wednesday. Atalanta, with the Russian national team midfielder Alexei Miranchuk, will meet in the 1/8 finals of the tournament with Real Madrid. While 23 times defended their gates during the current season, Manchester City will check the consistency of the knockout round debutant Borussia from Mönchengladbach. 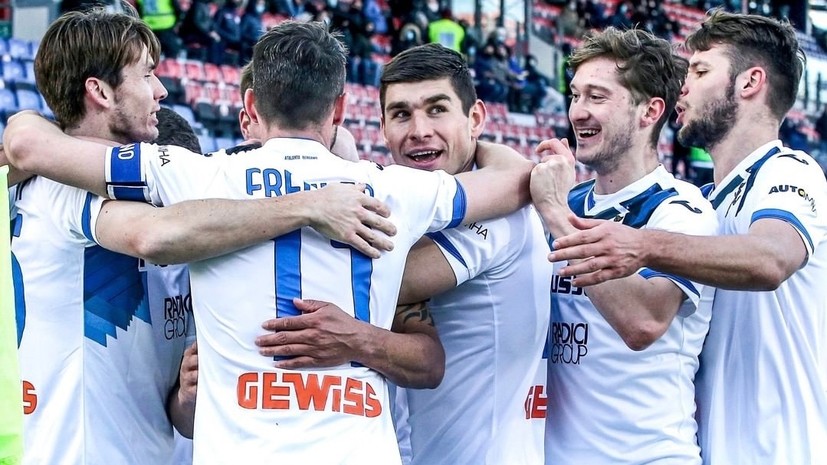 The decline of Borussia M amid the rise of Man City

For Borussia Mönchengladbach, appearing in the spring stage of the tournament is already a colossal success, since it has never gone so far.

Although Marco Rose's team failed the end of the group stage, they made it to the knockout round, leaving Shakhtar Donetsk and Inter Milan behind.

Two defeats in a row almost cost the Germans a ticket to the Europa League.

But due to the best personal indicators, black and white still made a historic step to the 1/8 finals.

True, the German footballers approach the meeting with Manchester City in a form that is far from ideal.

The team, which beat Bayern Munich and Borussia Dortmund back in January, is experiencing a significant decline today - it has not won the Bundesliga for four rounds, and has lost twice.

And at home with “Mainz” and “Cologne” - outsiders fighting for survival in the elite.

Even the brightest players of the attacking group did not help, thanks to which, at the preliminary stage of the Champions League, Mönchengladbach climbed into second place in terms of performance (16 goals).

This was largely due to injuries to the forwards.

But if on Wednesday Markus Thuram does not appear on the field, the head coach is counting on Alassane Plea.

“Plea plays an incredibly important role when he is completely healthy.

Unfortunately, in recent years, he was not always 100% ready.

Nevertheless, he has already managed to show what he is capable of in Europe, ”Rose said in an interview with the UEFA official website.

Maximum efficiency from the Borussia strikers is also needed because the Germans have the most reliable defense of the tournament in their opponents.

After a goal conceded from Porto in the opening round, the British keep the net for 526 minutes.

Moreover, Ederson, together with the four defenders (especially the central bunch of John Stones - Ruben Dias), have shown incredible reliability in all tournaments since autumn.

City's unbeaten streak has reached a record 18 games, and the number of meetings is zero (23) more than any club in the top five European championships.

Thanks to this, Pep Guardiola's team not only broke into the leaders of the Premier League, but also broke away from the nearest pursuer by 10 points.

And in the Champions League, he is quoted by bookmakers as the undisputed favorite.

At the same time, the head coach continues tactical experiments that turn Manchester into the team of the future.

Players are not tied to positions, but play different roles - and have no problem adapting to them.

The finalists of the attacks are football players who have never been distinguished by their performance before.

For example, the nominal defensive player Ilkay Gundogan has already scored 11 goals in the season.

Finally, the rotation of the roster is so active that it is extremely difficult to guess who will be the start of the “citizens” and with what task.

Nevertheless, Marco Rose said that he knows the opponent's weakness, which he will try to use for the good of Borussia: “If City doesn't like something, it’s playing off the ball.

We must play boldly and with great dedication in defense.

At the same time, the Mönchengladbach team will have to achieve the result on a neutral field: due to covid restrictions, UEFA moved the match to the Puskas Arena field in Budapest.

Real Madrid injuries as a chance for Atalanta's attack

For Atalanta midfielder Alexei Miranchuk, the games against Real Madrid will be a major milestone in his career.

The national team player, who remains the only Russian in the tournament, has a real chance to make his debut in the Champions League playoffs with a streak against the grand.

The challenge is difficult, since Zinedine Zidane's team is strong in itself - the status of the champion of Spain confirms this.

In addition, in February, she demonstrates phenomenal efficiency: four wins in four matches in Example in February and only two conceded goals.

“Real” did not knock out of the game rhythm even injuries, which had accumulated extremely much by Wednesday.

Out of the application, nine players risk being left at once, including key performers of the caliber of Sergio Ramos, Federico Valverde, Dani Carvajal, Eden Azar and Karim Benzema.

The loss of the Frenchman is especially noticeable, because he has 12 goals on his account - almost twice as many as all other Madrid forwards combined.

However, Real has no room for error: in the two previous draws, the grand was eliminated from the tournament at the 1/8 finals.

And it was certainly not for this that the Spaniards won the qualifying group by a willful effort (after two rounds they had only one point on their account), in order to let inexperienced rivals into the quarterfinals.

For Atalanta, this is only the second entry into the spring stage of the draw.

However, bergamasks, despite the relative youth and inexperience of the composition, are not as simple as it might seem.

After all, they overcame the 2019/20 preliminary stage after three debut defeats in a row - and this despite the resistance of Dynamo Zagreb, Manchester City and Shakhtar Donetsk.

In the playoffs, after the defeat of Valencia, the team of Gian Piero Gasperini was stopped only by the future vice-champion, Paris Saint-Germain.

Already in the last rally, Atalanta showed that they are not shy in front of titled rivals.

Now, from match to match, it only confirms the status of an uncompromising team, at the same time progressing in the domestic arena.

In the championship of the country, the Bergamaski, perhaps, are behind the leader - already ten points to Inter.

But for the second line with Juventus, Milan, and Roma they are quite capable of fighting.

Moreover, Atalanta beat the last two in Serie A, and took away points from the Turin players, bringing the match to a draw.

Gian Piero Gasperini's charges also performed well in the Italian Cup - they made it to the final, eliminating Cagliari, Lazio and Napoli from the path.

As a result, the Bergamasks now have the country's second-fastest attack and have suffered only one defeat since December 1, 2020.

Considering the high performance at the home stadium and the problems of Real Madrid with the squad, the Italians are able to become the author of perhaps the loudest sensation of the Champions League in February.