Chinanews client, Beijing, February 22 (Reporter Yue Chuan) Djokovic again, another Australian Open championship trophy. The picture shows Djokovic kissing the trophy.   In the men's singles final of the 2021 Australian Open, which ended on the 21st, Beijing time, the world's number one Djokovic defeated the new generation with a score of 7:5, 6:2, 6:2 and a big score of 3:0. The leader Medve 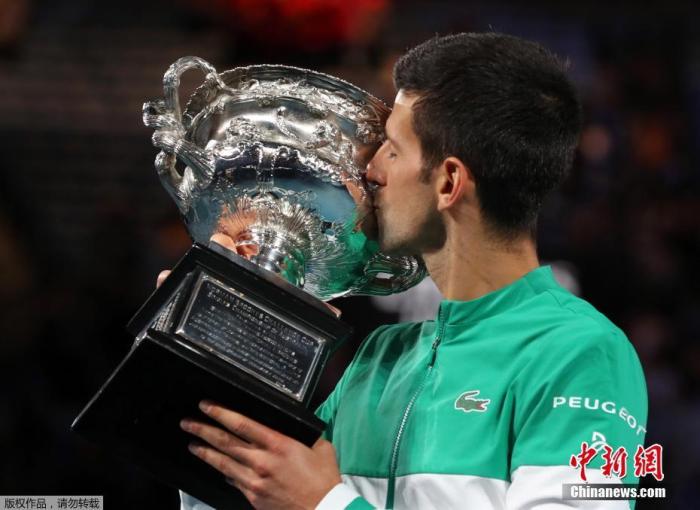 In the men's singles final of the 2021 Australian Open, which ended on the 21st, Beijing time, the world's number one Djokovic defeated the new generation with a score of 7:5, 6:2, 6:2 and a big score of 3:0. The leader Medvedev.

While he won the Norman Brooks Challenge Cup for the ninth time, he set another Australian Open men's singles record held by him.

With nine finals and nine summits, Djokovic deserves the title of "King of the Australian Open."

The picture shows Djokovic in the game

This is regarded as a peak matchup of similar strength, and it is also another challenge for the "Big Three" by the new generation.

After all, in last year's US Open, neither Tim, who won the championship, nor Zverev, who entered the final, faced the "Big Three" on the way forward.

The world number one Djokovic is certainly the favorite to win the championship, but the one-sided score in the final was unexpected.

This is the 28th time that Djokovic has reached the Grand Slam men's singles final, which is equal to Nadal. He is second only to Federer's 31 times in active service.

As the defending champion, the eight trophies won in the past are enough to prove Djokovic's dominance in the Australian Open.

Although not as experienced as Djokovic, the young Medvedev will not be unfamiliar with the grand slam final stage.

In the heart-wrenching final matchup of the U.S. Open in 2019, Medvedev was behind Nadal with a big score of 0:2 and dragged the game into the final set, but unfortunately it fell short.

With this kind of experience to pave the way, even though Medvedev is not a widely optimistic party in the final in front of Djokovic's proud Australian Open history, he is still pinned high.

The two are almost evenly divided in the historical confrontation. Djokovic, who has 4 wins in 7 games, is only slightly ahead.

Especially in the last 4 matches, Medvedev won 3 of them, including the elimination of the world number one in the ATP finals at the end of last year.

The data picture is taken by Medvedev Yin Liqin

This is why many people say that among the many new generation players, Medvedev is the most likely to end Djokovic on the hard court of the Australian Open.

In particular, the Russians are in good shape right now. Before this final, Medvedev had won 20 consecutive victories, of which 12 victories were defeating the top ten players in the world.

"No matter who wins the crown in the end, this will not be a matchup that can easily tell the winner." Before the game, the final was considered a confrontation like sparks hitting the earth, but the direction of the game was quite different from the prediction. .

The two played in the first set still inextricably.

At the beginning of the game Djokovic broke serve, but then Medvedev quickly completed the break, the two scored tightly, all the way to a 5 tie.

After Djokovic once again exceeded the score, the 12th inning became a watershed in the entire game.

In the face of a must-have serve game, Medvedev, who failed to withstand the pressure, sent out 3 points.

Although he stubbornly saved the first two, but ultimately failed to save the situation, lost the first set 5:7.

The big lead Djokovic played more easily in the second set, while Medvedev showed huge fluctuations in his mentality-unforced errors one after another, especially in his own serve. , Which made him completely at a disadvantage in the next game.

In today's tennis, few people can challenge Djokovic, who is known for his stability, when his performance is abnormal. Medvedev is obviously no exception.

So the game lost suspense. After two 6:2s, Djokovic once again held the familiar Norman Brooks Challenge Cup in his hands.

On the day the U.S. Open ended last year, a question that had been discussed for many years in world tennis finally had an answer-Austrian Tim became the first "post-90s" men's singles Grand Slam winner and ended the "Big Three" since 2017 Absolute monopoly on the Grand Slam after the Australian Open.

At that time, someone asked: Is an era over?

It's just that after today's finals, the 34-year-old Djokovic proved with a nearly perfect performance: This answer is not now.

"You will definitely win a Grand Slam in the future, I hope you don't mind waiting a few more years." After the game, Djokovic consoled Medvedev in this way.

In an earlier interview, Djokovic regarded both the number of Grand Slams and the number of the first week in the world as the number one in history as two major goals for his career.

In the latest world rankings announced next week, Djokovic will undoubtedly remain firmly at the top of the list.

Barring accidents, he will surpass Federer's historical record of "310 weeks" next month and complete one of the ultimate goals.

After this time the Australian Open won, Djokovic raised the number of individual Grand Slam titles to 18, two short of Federer and Nadal.

The internal competition of the "Big Three" continues.

The picture shows Djokovic holding up the trophy

Although he was defeated in a somewhat disappointing way in this game, this did not obliterate Medvedev's efforts. He and other peers are still doing their best to pursue the key to a new era.

The next Grand Slam, when Nadal returns to the French Open, this confrontation will be more three-dimensional and more eye-catching.

The "Big Three" do not think about the past, young people are not afraid of the future, they are all focused on the present.

Perhaps in a sense, this is the best time for men's tennis.