When the competitors spun down, Nils van der Poel spun up. Coach Johan Röjler tells how it was double World Cup gold and world record. - He has ten times more training in the execution of how to set a lap time, says Röjler. 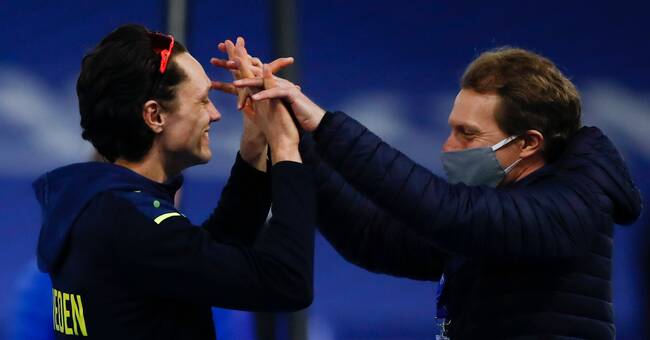 Johan Röjler knows what he is talking about.

The former Olympic skier is now van der Poel's coach and tells SVT Sport what the recharging before the World Cup looked like and why it became decisive.

- Of the other good riders, I would think that most drove maybe 20-30 laps at competitive speed during the last preparation week.

Everyone trains that way, then maybe they do different things.

He thus has ten times more training in the execution of how to set a lap time, says Röjler.

This means that van der Poel travels almost ten times as much as its competitors.

- The reason why the others do not do it is because they do not think they can tolerate that training.

Nils does it because he knows he can handle it.

But if you just see it, as people did in the Netherlands now, they just shake their heads and think that "this is what you do when you break yourself".

- I guess it's not quite as easy as it looks.

It's about having timing.

It is a fitness sport, but not as cycling or running.

It requires so much more timing and technology.

This is what you see when it looks easy during the first half of a 10,000-meter race.

Skating is like three steps but with a thousand steps.

You should jump a thousand steps and get as far as possible.

You have to set timing in each insert.

When you do it well, it looks good.

The world champion himself did not think it was particularly difficult to break a world record.

- It was physically strenuous, of course, but it's about being used to something you are not used to.

You get used to these feelings.

If you suddenly had to start winter bathing, the first week would have been difficult, but you get used to it.

That is what is so inspiring as an athlete.

Van der Poel went relatively early in Sunday's competition and had planned to watch the rest of the starting field enjoying a bottle of champagne that he had brought into the arena.

But he quickly scrapped that plan.

- We were so disappointed.

At first we were worried that it would be on the list of doping, but it turned out that there were internal rules.

We wanted to sit and watch the world's best 10,000 meter skiers and drink champagne.

But we did not get that.