Fujairah snatched three precious points on its way to secure survival in the Arabian Gulf League after its difficult victory over its guest Al Dhafra 4-2 in the 16th round of the Arab Gulf League, achieving its first "remontada" in the current season. The match resulted in important technical gains for Fujairah, most notably the brilliance of guard 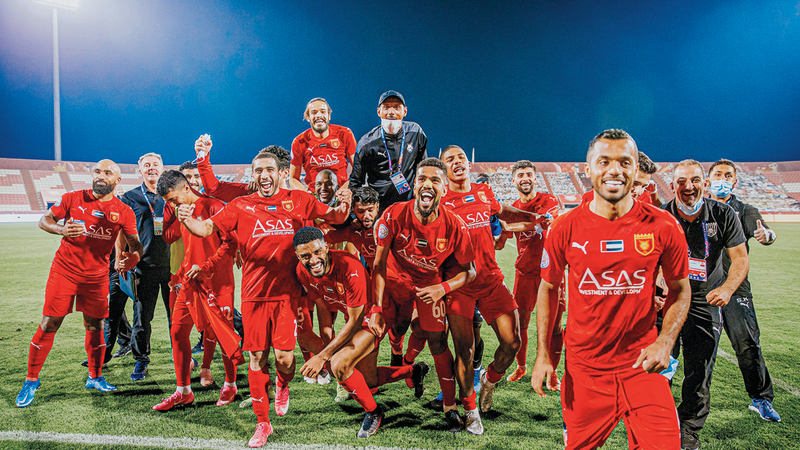 Most notably, the return of Saleh Rabei ... and the brilliance of the substitutes

Great joy for Fujairah players after the precious victory over Al Dhafra.

The match resulted in important technical gains for Fujairah, most notably the brilliance of his goalkeeper Saleh Rabei, direct points, the success of the substitutes, and other gains that contributed to the team leaving the penultimate position, and breathed life into the players again after receiving a number of negative results to come in 12th place with 10 points .

Fujairah won over a rival team for survival, which gave it an added moral opportunity after it reduced the difference between it and the teams that occupy higher positions, including Al Dhafra (16 points) and Khor Fakkan (15 points).

Fujairah benefited from the brilliance of goalkeeper Saleh Rabie in the match in a prominent way, and his responses to more than one dangerous attack contributed to preserving the wolves' achievement of the three points, which would nominate him to regain his main place in the squad in the upcoming matches.

Fujairah's departure from the penultimate center in which he was in the past rounds, benefiting from Ajman's loss against Hatta, is one of the important gains that give him a high morale before playing the next three matches, which will bring him together with Al Ain first and then

Fujairah achieved "Remontada" on Al Dhafra, which is his first in the current season, through which he reflected the technical image that led to him taking the score first and then losing the match, which could enhance confidence in the team.

Fujairah succeeded in the bench bench test after it involved five players who had not previously played enough minutes in previous matches, replacing the influential absences that affected Fujairah, and the technical staff can benefit from them in future matches.