Artyom Dzyuba remains the best Russian striker. The forward continues to score regularly for both Zenit and the national team and has no competitors. Several high-class performers are capable of playing in the position of an attacking midfielder, including Alexander Golovin and brothers Anton and Alexey Miranchuk. And in the midfield line the duet of Roman Zobnin and Magomed Ozdoev is unshakable. RT represents the country's top 25 attacking footballers. 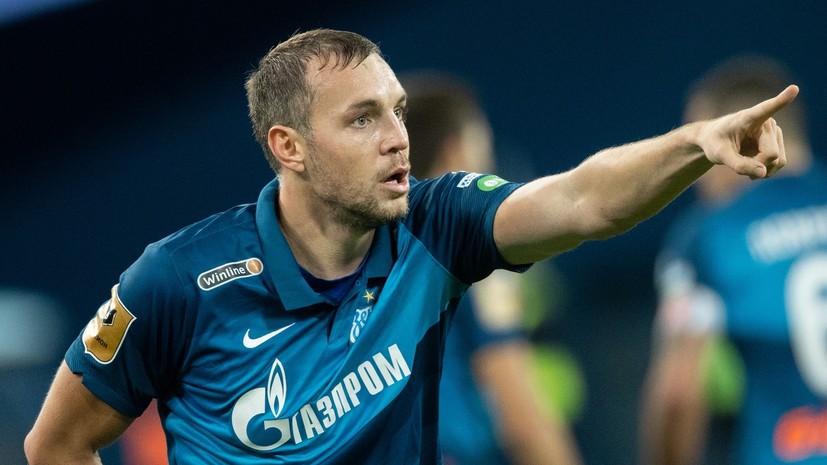 On June 11, the European Football Championship starts, in which the Russian national team will take part.

Four months before the start of the tournament, RT publishes a list of the 50 best domestic players in order to assess how great a choice the coaching staff of the national team, led by Stanislav Cherchesov, have.

Each position is represented by five performers, which are graded according to the editorial opinion.

In the first part, defensive athletes were collected.

Roman Zobnin is one of those footballers, without whom it is difficult to imagine the current Russian national team, as well as Moscow "Spartak".

The midfielder who does an enormous amount of work is the real heart of both teams.

Plus it is truly versatile.

The first half of the RPL season, the pupil of the Konoplev Academy was forced to spend on the right edge of the defense and was almost the best in the country.

He is able to play both in the support zone and even on the left flank.

It is generally believed that Zobnin is not strong in creation, but in the current championship he is in the top 10 in terms of the number of key passes.

Overall, 82.4% of the midfielder's passes are accurate.

As a rule, Magomed Ozdoev is a couple in the center of the field in Roman's national team.

Having played in Zenit under Sergei Semak, he became one of the leaders of the team despite the presence of high-class legionnaires.

Moreover, a football player is good not only in destruction, but also in creation.

It is no coincidence that in previous clubs Magomed, who has both a good pass and a strong blow, acted much closer to the attack.

It is interesting that Ozdoev ousted Daler Kuzyaev from the Zenit base.

Despite the desire to try his hand in Europe, the midfielder still remained in the team.

Its main strength is its versatility.

In the current season, Daler played in five positions: left and right midfield, center of the field, support zone, right flank of the defense.

And in the national team, he is ready to close any problem area without losing quality.

For example, in the League of Nations match with Turkey, Kuzyaev came out on the right in midfield, scored a goal and gave an assist.

It is not so easy to compare them, since the first in Krasnodar is aimed at creation, while the second is forced to participate in destruction, with which it copes quite successfully.

At the same time, Oblyakov is focused not only on this.

Through him, in fact, the entire game of the red-blue is built: in the RPL he meets the ball more often than anyone else in the team (on average, 54.8 assists per game, 84.7% accurate).

It is difficult to imagine the current CSKA without Ivan, while Utkin received a lot of game practice in the fall, rather, thanks to the personnel problems of Krasnodar, and after the leaders returned to the ranks, he was again transferred to the reserve.

A lot of really strong footballers with Russian passports play on the left edge of the attack, but Denis Cheryshev should be recognized as the best.

Even though he does not always make it to the starting lineup of Valencia and often gets injured, nothing can replace the experience of playing in one of the strongest leagues in the world - Example.

This was clearly shown by the example of Alexei Miranchuk, who was considered one of the best in the RPL, but in the European championship, Serie A, he does not look so impressive.

But his brother Anton picked up the leader's banner at Lokomotiv and made serious progress.

In particular, he scored three goals in the Champions League.

Let two of them from the penalty spot, but in the European Cup he not only implemented penalty kicks, but also led the game.

And often the haw turned out to be the only one who gave out sharpening transmissions.

In the RPL, in terms of the number of key passes (2.2), Miranchuk shares third place with Daniil Lesov.

He also has four "assists" in his asset.

The game of the young Dynamo player is admirable by the fans.

The 23-year-old footballer literally fell in love with the blue-white fans with his extraordinary technique.

But Danneel includes dribbling intelligently, has a specific finish.

In the current RPL season, he scored six goals (all from the game).

He also has two assists.

His peer Andrei Mostovoy does not act so brightly, but at the same time does an equally large amount of work.

Many doubted whether the midfielder would be able to play at Zenit after returning from Sochi, but he quickly became a significant link in the team.

And in the national team, Cherchesov released the young winger on the field after the first call, which is a rarity.

Finally, Reziwan Mirzov deserved to be included in the top five of the national team in his position.

In Spartak the technical midfielder did not succeed, but in Khimki he gained confidence in his abilities and managed to score four goals, a couple of which came out very handsome.

But on the right flank, the choice of players in the country is not so great.

The best, according to RT, remains Alexey Ionov.

In February, the pupil of Zenit will turn 32, but so far he has not only failed, but also deserved a new challenge: from Rostov he moved to Krasnodar, where he quickly became the main player.

Until now, Alexey is indispensable in the national team.

Behind him are three young footballers.

The current season turns out to be difficult for the Krasnodar footballer, because he practically does not get into the starting lineup of the southerners.

However, at the end of the year, the midfielder reminded of himself again, scoring against Rotor and Lokomotiv.

And a little earlier he struck the gate of Sevilla in the Champions League.

It remains to be hoped that Suleimanov will overcome the black strip and begin to realize his potential.

Two footballers of the Russian youth team, Konstantin Kuchaev and Denis Makarov, on the contrary, have made serious progress.

The latter became one of the main discoveries of the season.

A player with good technique and a strong shot, who played in the FNL in 2019, scored six goals in all tournaments.

Kuchaev was also pleased with his unprecedented performance, who scored six times in the championship alone and gave three assists.

Alexey Sutormin does not act as brightly as his colleagues in line, but he is no less useful.

Together with Kuzyaev, the Muscovite is distinguished by enviable versatility and often “patching up gaps” in Zenit's line-up.

At the end of the year, the midfielder played several times on the right in defense.

High-quality attacking midfielders are a piece commodity, but Cherchesov has a surprisingly rich selection of players of this role, and two of them are already playing in Europe.

For Alexander Golovin, the season is still getting blurry: he missed five months due to injury.

Nevertheless, after his return, the Russian immediately began to help Monaco: he scored against Lorient, gave two assists in the game with Marseille, and scored a hat-trick in the match with Nimes.

Although he scored four goals in all tournaments as part of the Bergamascans, he has not yet fully integrated into the team's game, as head coach Gian Piero Gasperini often says.

A serious blow to the positions of Alexei was also inflicted by the not very successful performance for the national team.

Even last season, it seemed that Zelimkhan Bakaev would compete for a place in the main squad of the national team with Golovin and Miranchuk.

However, the Spartak player slowed down a lot and even lost his place in the main squad of the red and white.

Despite this, the midfielder with five assists is one of the best assistants of the season in the RPL.

Alexander Erokhin, on the contrary, was among those who revealed themselves in a new way.

After the injury of Serdar Azmun, Semak began to use the midfielder in the position under the striker, and he greatly helped Zenit in a difficult period.

The midfielder has seven goals in the RPL and Champions League.

Behind him is Sergey Tkachev, one of the most underrated players in the RPL.

The 31-year-old Russian can hardly be called a star, but he leads the entire game of Arsenal.

So, last season, with eight assists in the list of the best assistants of the tournament, he lost only to Dziuba (12) and Bakaev (9), and the year before last - he scored 12 points for performance (5 + 7) and helped the Tula players to break into European cups for the first time in history.

It is no coincidence that last season the forward became both the top scorer of the RPL along with Serdar Azmun and the best assistant.

This year he has already scored 13 goals in all tournaments, more than any other Russian striker.

At 32, Artyom is also irreplaceable in the national team.

In his absence, the national team scored only two goals last year and did not win a single victory.

In the current RPL draw, Fyodor Chalov and Alexander Sobolev, who scored five goals each, share the second place in the scorers' race among Russian strikers.

It is difficult to determine the best among them, but the soldier is stronger in the game - in the championship he has already given four assists, while the Spartak player has only one.

But Sobolev, along with Oliver Abilgor, is the best in the league in horse martial arts, winning an average of 5.3 duels on the "second floor".

Experienced Fyodor Smolov and Alexander Kokorin are on the fourth and fifth places.

For both, the season is not going very well so far.

Despite this, Kokorin received a new call in January and left for Fiorentina.

Smolov chose this path exactly a year ago, when he went on loan to Celta.

To a certain extent, the careers of Dynamo teammates are developing in a similar way.

One thing is for sure: in terms of talent, they are not inferior to any of the forwards presented in the rating.

However, for various reasons, it was not fully disclosed, especially for Alexander.