Analysts: Marvik was committed to implementing the terms of the new contract .. 4 advantages of his stay in the country

Athletes and analysts have identified four advantages for the permanent residency of the coach of the national team, Dutch Van Bert Marwijk, in the country according to the terms of the new contract he recently signed with the Football Association, unlike his previous period in which he coached the national team, as he lived in his country, the Netherlands, and strengthened 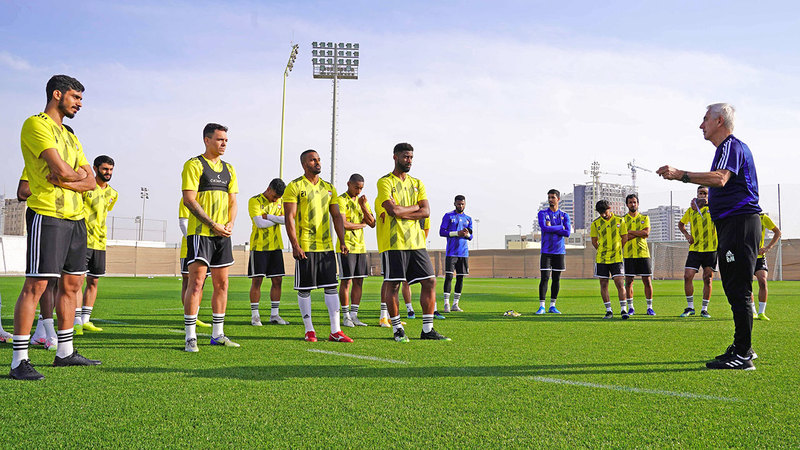 Analysts: Marvik was committed to implementing the terms of the new contract .. 4 advantages of his stay in the country

Athletes and analysts have identified four advantages for the permanent residency of the national team coach, Dutch Van Bert Marwijk, in the country according to the terms of the new contract he recently signed with the Football Association, unlike his previous period in which he trained the national team, as he lived in his country the Netherlands and led the training of the white remotely On the television screen, noting that these positives are the coach's knowledge of his players closely and for every small and large in the national team, and his presence in the country helps him in the process of selecting players himself by watching their levels with their teams as well as attending club exercises to follow the players, not relying only on his assistants As well as strengthening his relations further with the team’s administrative apparatus and the National Teams Committee, pointing out that the sensitivity of the White’s mission in the coming stage requires Marvik’s permanent residence in the country, and for him to be near his players and not lead them on television.

They told "Emirates Today": "Marvik's presence with the national team and his continued residency in the country will positively affect the national team's players in the next stage, and it will bring about a major shift in the team's performance in general."

In implementation of the terms of the new contract, Marvik was with the national team during the last period and led him so far in two internal rallies, in addition to his leadership during his international friendly match against Iraq last January, which ended in a draw.

Last Wednesday, Al-Abyadh finished an internal camp in Dubai in preparation for his remaining matches in the joint qualifiers for the 2022 World Cup and the 2023 AFC Asian Cup, and Al-Abyadh will return to the internal gathering again from March 17th until March 30th.

The national team ranks fourth in the standings of its group with six points and plays four remaining matches for it in these qualifiers against Malaysia on March 25 and Indonesia on the 30th of the same month, while its journey ends with a meeting between Thailand and Vietnam, respectively, on the 7th and 15th of next June.

A member of the Football Association Board of Directors, a former sports analyst at Dubai Sports Channel, Muhammad Matar Ghorab, described Marvik's stay in the country completely, and his direct leadership of the team as a good step, considering that the coach's presence in the previous period away from the national team is unacceptable.

Ghorab said: "The next stage will reveal the extent of the national team's ability to overcome all the difficulties that it will face and prepare as well for the next stage, and the most important thing is to ensure ascension and the need to focus on overcoming this stage with its different circumstances, especially since there are many overlapping matters and the situation of the team is not clear."

And Mohamed Matar Ghorab stressed the importance of taking serious steps towards hosting the national team for its group's qualifying matches.

For his part, a member of the board of directors of Dibba Fujairah club, director of the first team, Jumah Al-Abdouli, considered that the presence of coach Marvik outside the country and his leadership of the national team from a distance and not in the stadium in the past period was the only negative, stressing that the situation now is very different because the coach will be constantly present in the country Describing this as a proper step by the Football Association and the National Teams Committee.

He said: “This matter will have several positive repercussions, which are represented in the fact that the coach’s presence in the country greatly helps him in working to strengthen his relations with his assistant technical staff and with the administrative apparatus, as well as with the national teams committee, in addition to standing by himself on the levels of the players and the extent of their physical and technical readiness. And getting to know them closely, and this step will also help him in forming a strong team and dealing with all circumstances, as well as in the process of selecting the most suitable players for the team by helping them in official matches with their teams, ”considering that watching the players closely in the stadium is different from watching the coach Them from behind the tv screen

In turn, a former member of the Football Association Board of Directors, Dr. Salim Al Shamsi, confirmed that despite the decline in the levels of players, as well as the decline in the level of the local league and the low level of physical fitness, and that the lack of harmony between the players of the national team directly affects the team in the next stage;

Everyone should be optimistic about the team and not lose hope in the possibility of qualifying for the next round in the joint qualifiers for the 2022 World Cup.

He said: The next stage in the team’s career needs great effort and work, and betting on the fighting spirit and morale of the players to fill some technical gaps in the national team, especially since coach Marvik does not spend the short time since his assumption of the task in realizing some negatives.

The advantages of Marvik's presence and residence in the country

1- His full knowledge of every minor and major in the national team.

To their levels with their teams.

3- Attending club exercises to follow up the players, not just accreditation

And the National Teams Committee.