The possibility of losing the belt, the prospects of the brothers and the fight between Ismailov and Mineev: what Nurmagomedov discussed with journalists

Khabib Nurmagomedov does not intend to resume his career. According to the champion, it is time to strip him of his belt so that the UFC lightweight division continues to develop. He stated this during a conversation with journalists. The Russian also said when he intends to hold another meeting with Dana White, and confirmed that he does not want to move to welterweight for the sake of a fight with Georges Saint-Pierre. Among other things, the fighter answered why he was not interested in the battle with Magomed Ismailov according to the grappling rules, and suggested why the reigning bantamweight champion Peter Yan was inferior to him in popularity. 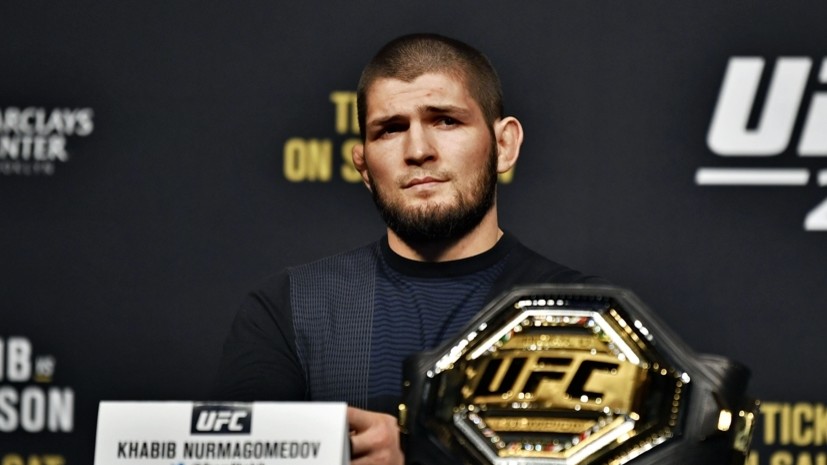 In recent days, Khabib Nurmagomedov has once again been in the spotlight.

First, the reigning UFC champion gave an interview to Match TV, and a day later he again answered journalists' questions - at the end of the next show of his own promotion of the Eagle Fighting Championship.

As expected, most of the media attention was focused on the athlete's possible career renewal and his potential fight with Georges Saint-Pierre.

Over the past weeks, the future of Nurmagomedov continues to be one of the most discussed topics in MMA.

It was assumed that the situation would clear up after the meeting of the Russian with the head of the UFC Dana White in January, as well as after the end of the UFC 257 tournament, in the main duel of which the former opponents of the champion, Conor McGregor and Dustin Poirier, fought.

It was believed that if the Irishman wins, the matchmakers will make every possible effort to arrange a large-scale revenge between Nurmagomedov and McGregor.

However, the crushing defeat of Conor put an end to these prospects, and the leadership of the Absolute Fighting Championship lost one of the main arguments in the dialogue with Khabib.

The return fight with Poirier is clearly inferior in financial terms and will not attract the attention it deserves, either from the fans or from the champion himself.

Answering questions from journalists, Nurmagomedov once again stated that he did not intend to resume his career, and also admitted that he was not satisfied with the state of affairs in the UFC lightweight division.

He assured that he did not lose contact with White and was planning to hold another meeting with him in February, but did not disclose the details of the negotiations.

“It would be at least wrong to tell you about what is happening in the communication between us.

I told him that I didn’t like that the division was stagnating.

I want him to move, so that the guys fight for the belt, the applicants come to light.

Because I have already retired, leave me alone.

Let them do fights, someone fights for the belt, someone - to become a contender ... There are at least four or five people who stand, because I am the reigning champion.

Maybe in two weeks, or in a month, or tomorrow, if Dana sees my message.

Maybe he will watch it and think: “Let me stop torturing the boy,” Nurmagomedov said on Match TV.

According to the Russian, at the moment the positions of the fighters in the light category have been determined.

A circle of applicants for the belt and those who will be able to compete for the trophy in the near future have already formed.

In doing so, he admitted that he understands why White is so desperately trying to persuade him to return to the cage.

“I understand Dana's desire - I lost him, lost me.

And he is the owner of the organization.

Of course, (from being deprived of the lightweight title -

) it will become easier for me.

Let them appoint a fight for a vacant title, a challenger fight.

I have my own people there in this weight - dos Anios, Gaji, Poirier, the same Conor.

They will still keep me heard, ”said the fighter after the Eagle FC 33 tournament.

Nurmagomedov also shared his opinion on a possible duel with Saint-Pierre, which was widely discussed for two and a half years.

Until now, many believed that it was the prospect of a meeting with Georges that could force Khabib to resume his career, but the stumbling block was the conditions of the fight.

The Canadian has repeatedly said that he does not intend to go down to lightweight, and the Russian does not want to rise to a higher category.

) 77 kilograms I will definitely not fight.

This is not my natural weight class at all.

When I'm in good shape, I have 82 kilograms.

To round up to 77 and weigh 80-81 in battle against the best fighter in the history of this weight?

You know, what it reminds you ... As in childhood you fight with a karate fighter, took him by the legs, knocked him down, and he says: "Fight in a stance like a man" ... I am a lightweight champion and I would be interested in something here, ”Nurmagomedov explained.

At the same time, many would be curious to watch Nurmagomedov in grappling competitions.

Recently, many star wrestlers from the world of mixed martial arts actively participate in tournaments in this type of martial arts, which are increasingly popular.

However, Khabib noted that he is not yet interested in such a thing, even if Magomed Ismailov becomes his rival.

“Even if I go against Misha Galustyan or Andrei Kirilenko, it will also cause a great stir.

Imagine, Kirilenko and I are fighting.

Will it be interesting anyway?

The whole basketball world will be watching this event, Americans will watch, my fans and so on.

Any streaming company will take off if they show this event.

And let the Magician learn to fight ... Mineev was not imprisoned, why should he fight me?

Moreover, now I am no less than him ... Just don’t show him this video, ”Nurmagomedov joked.

But if Nurmagomedov has no desire to conduct a duel with Ismailov himself, then there are plans to involve him in his own promotion.

So, the owner of EFC expressed interest in the battle between Magomed and Vladimir Mineev taking place within the framework of a joint tournament of his organization and AMC Fight Nights.

“Now we are negotiating to organize the Ismailov - Mineev duel at our joint tournament, which will be held in September.

Now we need to sit down and talk.

The only thing that holds me back is that the story originated exclusively in Fight Nights, and climb there, run ahead of the locomotive, try to organize in our joint tournament ... But if they want, both Maga and Mineev, as well as the league, will agree , then we will arrange this battle in September, "Nurmagomedov said.

He also commented on the prospect of a fight between Ismailov and Alexander Shlemenko under the auspices of the EFC.

Nurmagomedov called this confrontation extremely curious and expressed the opinion that in the near future Magomed may not find a more worthy opponent.

“These fighters have no contract with us - neither Ismailov nor Shlemenko.

But in general, this fight would turn out to be very interesting, since they are big stars.

If I were Magoi, I would have fought with Alexander after the battle with Mineev.

I don't see any other options.

If they meet at our tournament, I will be doubly happy.

At the same time, Nurmagomedov admitted that the most desirable for him would be to organize a duel between Fedor Emelianenko and Brock Lesnar.

This fight was one of the most discussed in the late 2000s - early 2010s, but for various reasons it never took place.

“I would take Brock Lesnar.

And one could make him a fight with Fedor Emelianenko.

I would organize this fight in my league, ”Nurmagomedov said.

The reigning UFC lightweight champion did not ignore his compatriots, who continue to actively participate in the largest promotions in the world.

So, he shared his opinion on the prospects of Alexander Volkov and expressed the opinion that he should not change the training team in anticipation of a meeting with the heavyweight stars.

“I think Sasha needs to walk as he walks, not to take his foot off the gas, to plow.

And for a heavyweight he's a very good age ... Overeem is Overeem.

And then there is Blades, Miocic, who passes in the leg and plants.

You need to work as you did, but also add.

Because the further, the stronger the rivals will be, ”Nurmagomedov said.

He also assessed the prospects of his cousin Umar in the lightest division of the UFC and shared his opinion on his potential battle with the reigning champion Peter Jan.

) just got into a fight.

He has to fight for another two years to get there.

Will Peter be there ... Now to talk about it, to fantasize is wrong.

I have a good attitude towards Peter.

The boy left the village, became the champion of the best league in the world.

Almost the same story as mine.

In any field, in any work, if a person becomes the best, I will always have the right, good attitude towards this person ... If they meet with Umar, they will fight, the strongest will win.

Peter will have a fight soon.

I wish him victory.

If he wins, I will be happy for him, ”said the fighter.

He also shared his opinion on why Peter is inferior to him in terms of popularity.

Secondly, I don't even know.

I went to the title for about six years.

There were injuries, loud fights, cancellations of fights.

There was always some kind of movement in the media.

Because of this, I think.

And he quickly reached the waist.

Maybe if he were the first champion ... There are many factors, ”Nurmagomedov answered.

Khabib also spoke about the future fights of representatives of his Eagles MMA team and told how they react to the fact that he spends more and more time outside the hall.

They are already teasing.

They say: "Why are you so busy, Abdulmanapovich" - even by patronymic.

I will most likely spend the whole March there: Islam (Makhachev -

fights on March 6 in the UFC,

And on April 2, Usman (Nurmagomedov) will perform at the Bellator tournament in Connecticut.

March will be serious, as well as early April.

And I will spend all this time there, ”concluded the reigning UFC champion.