4 rounds that reveal the features of the champions

The next four rounds of the Arab Gulf Football League will witness heavy-caliber confrontations determined in light of their results the features of the champion of the competition that Sharjah is currently leading with a score of 36 points, ahead of Al-Jazeera (the runner-up), who took advantage of the stumbling of "the king" in the 15th round with a positive draw. 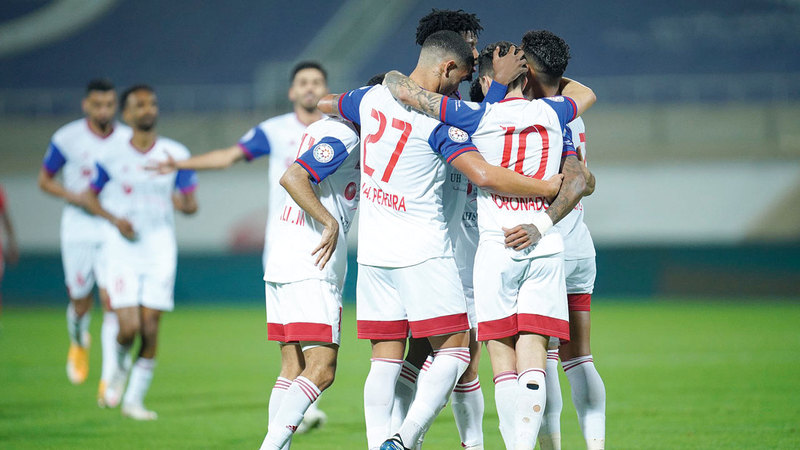 It witnesses great summits among the front owners, most notably the confrontation with Sharjah and Al Jazeera

4 rounds that reveal the features of the champions

The next four rounds of the Arab Gulf Football League will witness heavy-caliber confrontations determined in light of their results the features of the champion of the competition that Sharjah is currently leading with a score of 36 points, ahead of Al-Jazeera (the runner-up), who took advantage of the stumbling of "the king" in the 15th round by a positive draw with Unit 1 -1 to achieve a big victory over Al Dhafra with a score of 5-1 and reduce the difference between them to three points only, after it was five points before this confrontation, while Bani Yas does not seem far from the competition struggle, as he succeeded after the last round in alone in the third place with 29 points, They are seven points behind Sharjah.

Sharjah's confrontations appear to be the most difficult in the next phase of the rest of the teams that are fighting with him for the title, as a very difficult confrontation awaits him with the start of the 16th round, when Al Ain receives the "wounded" and seeks to return to the front after losing from Al-Ahly youth 1-4, after which the "king will leave." »To face Al Dhafra in the 17th round, followed by the big confrontation this month against Al Jazeera, his direct competitor in the 18th round, which will be held in the Basma emirate, then he will go out for another extremely difficult match against Al Nasr in Dubai.

The status of the island is not much different from Sharjah in the next four rounds, as the Kalba Federation receives the "black horse" of the competition at the Mohammed bin Zayed Stadium in round 16, and is also engaged in a strong match in the 17th round against Bani Yas in Al Shamkha, then meets Sharjah in the round in the round. 18, and then receives Al-Ahly youth, who are living their best stages in this period.

On the other hand, Al-Ahly youth will face difficult confrontations as part of their efforts to compete for the title after the big changes that have occurred to him since the arrival of his national coach Mahdi Ali, as he receives in round 16 the unit who is living a good period in his career in the league, and after that he will go out to meet Hatta, then receive Khorfakkan Which makes his chances to advance towards the front great, before he meets Al Jazeera at the latter's court.

Shabab Al-Ahly is currently ranked fifth in the overall ranking with 25 points.

In turn, the ambitious victory will also enter the league championship, strong tests with his new Argentine coach Ramon Diaz, as he will play the Deira derby with Al Wasl, then go out in round 17 to face Ajman, and meet Hatta in the 18th round in a relatively easy match, and then receive Sharjah in Round 19 top.

Bani Yas must do his best to continue the competition struggle, as he will go out in a dangerous confrontation in front of Khorfakkan, and then return to receive the island, and at his stadium he will receive Ajman in the 18th round, then go out to meet the Kalba Federation.

Khaled Obaid: Sharjah and Al Jazeera are a bet

The former director of the football team at Al-Nasr Club, Khaled Obeid, confirmed that the competition for the league title will diminish in the coming rounds, to become between two or three teams at most.

He said to Emirates Today: “I personally believe that Al-Nasr will not be a competitor, despite being in fourth place in the competition table. However, the technical problems that the team are currently experiencing are due to the decline in the level of Diaa Sabaa and Mendes, and the changes made by the new Argentine coach Ramon Diaz to the squad. The one who fought the Ittihad Kalba match, confirms that the coach needs some time to make his mark, and we are in a difficult time in the competition that does not allow wasting time.

He added, "Sharjah and Al Jazeera are currently betting mare, and the closest to the competition, and Bani Yas and Al-Ahly youth may enter with them, and from my point of view, the clubs that will be able to outperform the Al Wasat clubs at the bottom of the table are the ones that will win the title."

He continued: “Al-Faisal in determining the identity of the league champion will not be direct confrontations between the teams competing for the title, but between all the teams, for example, the Kalba Federation offers one of its best levels, and Khor Fakkan is a difficult team, especially at its stadium, as well as Ajman has evolved with the transfer period. "Winter season, and I think that these teams will determine the identity of the league champion."

Ranking of the league teams after the 15th round

• Sharjah (the leaders) and Al Jazira (the runner-up) meet in the 18th round.