Al Ain team strengthened its negative number for the third time in its history since the application of professionalism, as it collected under the leadership of its Portuguese coach, Pedro Emmanuel, only 24 points, after 15 rounds out of 45, and he bled 21 points, including a loss in three matches, the last of which was against Shabab Al-Ahly on Friday. Past, besides 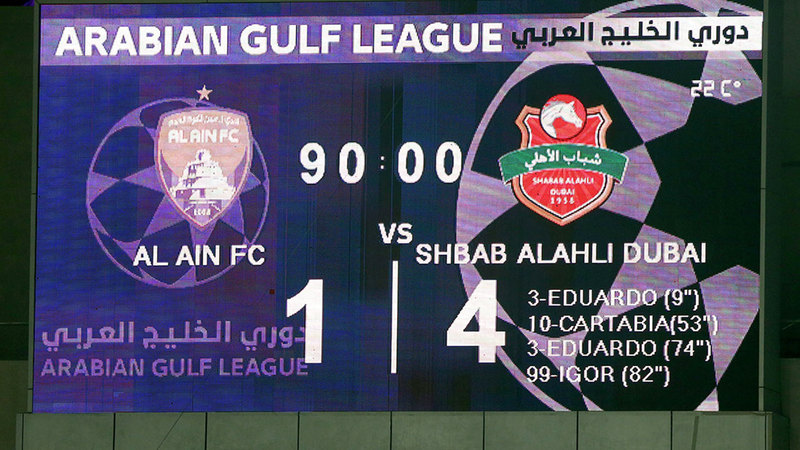 Al Ain team strengthened its negative number for the third time in its history since the application of professionalism, as it collected under the leadership of its Portuguese coach, Pedro Emmanuel, only 24 points, after 15 rounds out of 45, and he bled 21 points, including a loss in three matches, the last of which was against Shabab Al-Ahly on Friday. The past, in addition to six draws against the midfield teams, was enough to put the team in an advanced position that allows it to compete for the latest local titles, after leaving the President's Cup and the Arab Gulf Cup in the first round.

Over the past 12 seasons, he was less than the points collected by "Al-Zaeem" in the 2010-2011 edition, when he got only 14 points (three wins, five draws, and seven defeats), while he was the second lowest score he got in the 2013-2014 season, This is when he collected 23 points (six wins, five draws, and four defeats), while the current season witnessed the third lowest number of points, with 24 points (six wins, six draws, and three defeats).

During the current season, "Al Zaeem" made the worst start in the history of his participation in the Arab Gulf League over the past 13 years, after collecting only five points in the first four rounds (one win, two draws, and a loss), while the Croatian coach, Zoran Mamic, keeps the best A breakthrough, after collecting 12 points (the full mark) in the 2018-2019 season.

Since coach Pedro Emmanuel sat on the bench of the team in January 2020, he led the team in 36 matches in all competitions, won 15 matches, tied on 10 occasions, while losing 11 games, and the team's efforts became far from the circle of the teams competing for the title of the competition in the current season .

For his part, the captain and defender of Al Ain team, Muhannad Al-Anzi, expressed their disappointment in the results achieved by the team, and the balance of points collected (24 out of 45), stressing that many factors were the reason for the team to occupy sixth place in the league table ranking competition The Arabian Gulf after 15 rounds.

He said in a press statement: “The many absences that the team have witnessed since the beginning of the season are among the reasons.” He added: “The team missed the goalkeeper Khaled Issa's services, and the three-line defense Ismail Ahmed, Muhammad Ahmed and Muhammad Fayez, in addition to the midfield duo Mohamed Abdel Rahman and Ahmed Berman. It is true that I was also absent with them, but when I returned to participate, I alone could not make the addition. ”

And about the team’s ability and needs in order to return to the path of victories and correct the path, the veteran player said: “I hope that the injured will recover and return to the squad, and that we play from the heart for the benefit of the team, and that it achieves the required change, and contributes to the team’s comeback once again to ascend to the podium.” .

Al Ain Harvest up to Round 15 During Pro:

• “Al-Zaeem” suffered three losses, the last of which was with Shabab Al-Ahly, and six draws against the midfield teams.