Fujairah dreams of making history ... and victory with full force

Fujairah is looking forward to achieving an unprecedented achievement, when it hosts Al Nasr at 5:15 pm today, within the second leg of the quarter-finals of the Arabian Gulf Cup, and set him a valuable opportunity to qualify for the semi-finals for the first time in its history, and stripping the Dean of his title 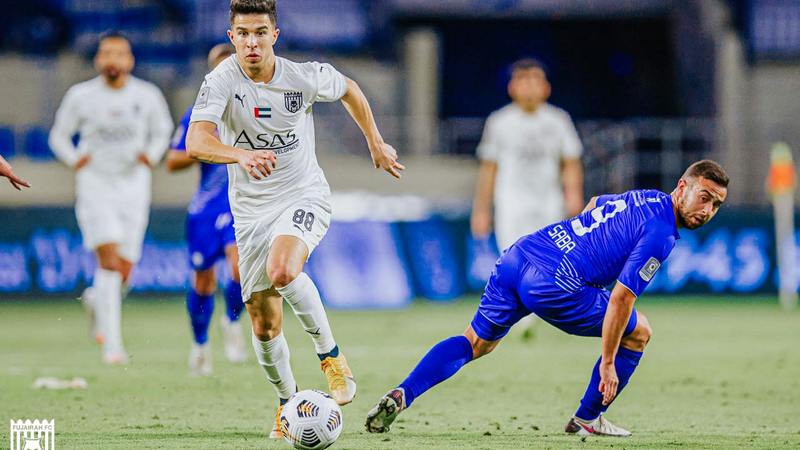 Fujairah dreams of making history ... and victory with full force

Side of the first-leg match between Al-Nasr and Fujairah.

Fujairah is looking forward to achieving an unprecedented achievement, when it hosts Al Nasr at 5:15 pm today, within the second leg of the quarter-finals of the Arab Gulf Cup, and set him as a valuable opportunity to qualify for the semi-finals, for the first time in its history, and stripping the Dean of his title that He achieved it last season.

The first leg, which was held at Al-Nasr Stadium, ended in a 1-1 draw.

Fujairah needs to draw without goals or win any result to ensure qualification, while the general needs to win or draw with more than one goal, to benefit from scoring goals at the opponent's stadium.

However, today's match differs from its predecessor in the first stage, due to the return of the international Al-Nasr players who were absent from participating in that match, in addition to the fact that Al-Nasr benefited from the football company’s contract with the Uzbek international wing, Dostunbek Khamdamov, in a distinctive technical addition, in return, Fujairah will enter the match. By adding the player Ahmed Moussa, next to his former foreign players.

Fujairah coach, Serbian Goran Toftitzdic, believes that the match is important for the return of the team’s spirit after losing to Ajman in the 13th round of the Arab Gulf League, relying on the good bid of the “Wolves” in the two previous matches that the two teams fought in the current season of the tournament, during which the team appeared distinctively to achieve The result qualifying for the semi-finals

Fujairah is expected to play the match with a formation consisting of Abdullah Ismail goalkeepers, and in front of him are: Oulabi, Hamdan Nasser, Muhammad Mustafa, Eidullah Nasser, Khalil Khamis, Roly Nunataw, Firas Al Arabi, Abdullah Salem, Christian Samuel, Farley Rosa, while the team is absent. Each of Salem Seif and Bilal Yousef.

On the other hand, it is expected that Al-Nasr will play the match by forming a component of: Ahmed Shambeh in goalkeeping, and in front of him are: Mohamed Fawzi, Lima, Mohamed Ayed, Mahmoud Khami, Mendes, Tozi, Tariq Ahmed, Khamdamov, Diaa Sabaa, Tigali.

Ittihad Kalba hosts its rival Bani Yas at 8:00 pm today in the second leg of the quarter-finals of the Arab Gulf Cup, in a match in which the two teams look to continue appearing positively in the current season, as Bani Yas is in third place in the ranking of the Arab Gulf League, and Ittihad Kalba is in eighth place.

Malaba bears a great responsibility to settle the result in the interest of his team, due to the effective absences in the ranks of the Kalba Federation, represented by the absence of Fahd Sabil to stop in the defense line, the Brazilian Mariani in the midfield, and the Chilean António Jr., whose contract was canceled in the current winter transfers at his will.

Ittihad Kalba had imposed a tie on Bani Yas with a goal to the same in the first leg, and was able to win against him with two clean goals in the League Championship, scored by Chilean António Jr., and Kalba needs to win any result or a draw without goals to snatch the access card to the semi-finals, while Bani’s victory will lead Yas or tied with more than one goal to qualify.

For his part, Al Ittihad Kalba coach, Uruguayan Jorge Da Silva, believes that the preparations for the match were good, and will help him achieve the positive result required to qualify.