Varlamov's 142-minute dry streak, Zaitsev's fifth gear, Ovechkin's removal: the events of the day in the NHL with the participation of the Russians

Islanders goalkeeper Semyon Varlamov missed the first goal of the season in the match against New Jersey and showed the eighth result in NHL history in terms of dry streak duration at the start of the championship. Ottawa defender Nikita Zaitsev scored an assist in the fourth match in a row and rose to fourth place in the list of the best league assistants. In addition, the details of the suspension of the Russian hockey players of Washington DC due to violation of the protocol to combat the spread of coronavirus infection became known. 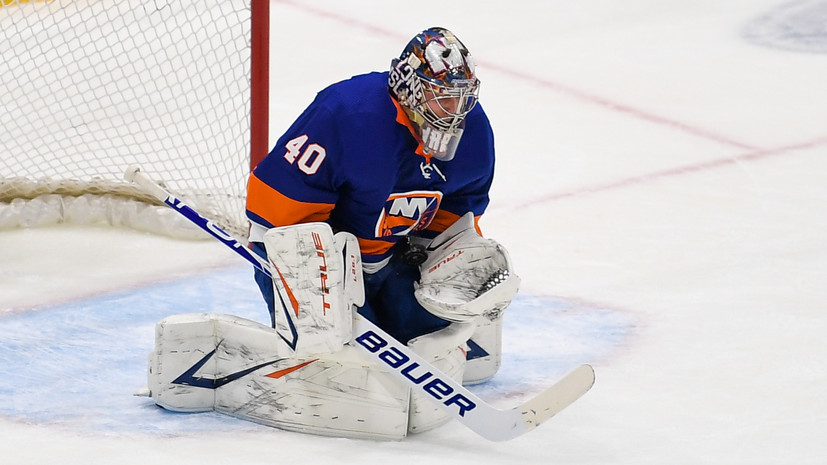 The end of the "dry" series of Varlamov

Islanders goalkeeper Semyon Varlamov became one of the protagonists of the first leg of the National Hockey League regular season.

In two of the three starting meetings of the season, the goalkeeper's confident play not only helped the New York club win, but also gave him a chance to make history.

Each subsequent period with no goals conceded brought him closer to the league record for the duration of a dry run at the start of the championship, which has been held by Lorne Chabot for 90 years.

The meeting with New Jersey turned out to be rather one-sided.

The Islanders scored twice in the first period, after which they confidently brought matters to another victory (4: 1).

Of course, Varlamov played an important role in this, having issued 30 saves.

However, at the beginning of the second period, Nathan Bastian still managed to catch the Russian by surprise.

Not to say that the Canadian's throw was non-beating, but the puck passed exactly over the Russian's right shield and ended up in the net.

Thus, even though Varlamov did not manage to compete with Shabo's record, he still went down in NHL history.

His “dry” streak at the start of the season was 142 minutes 10 seconds and was the eighth in duration.

In this list, he was above Benny Grant, John Ross Roach and Roberto Luongo.

The Russian ranks first in the league in terms of the percentage of reflected shots (98.8%) and the number of goals conceded on average per game (0.33) among goalkeepers who have gone on the ice at least twice this season.

Andrey Vasilevsky is a little behind him.

The current winner of the Vezina Trophy helped Tampa extend their unbeaten run at the start of the championship to three matches.

In the confrontation with Columbus, he saved the goal 23 times and helped his partners win in overtime (3: 2).

The start of the regular season was quite successful for the Ottawa Senators Russian defender.

Even if the team itself does not please the fans yet and has only one victory in its assets, this does not prevent Nikita Zaitsev from demonstrating a high level.

In each of the matches, he was marked with assists and is currently among the top ten players in the championship in terms of plus / minus.

And this is in the team that finished the first four meetings with the total difference of goals scored and conceded at 11:14.

In the game against Winnipeg, Zaitsev spent 21 minutes 38 seconds on the ice - more than anyone else in the Senators, and at the end of the third period helped the team to avoid defeat with a score of 0: 4.

The Russian defender backed Chris Tierney's breakthrough and helped the Canadian stand out with a cut pass to the far post.

He has five assists - the second best among defenders and fourth in the league.

Thanks to this, Zaitsev is among the leaders of the NHL in terms of usefulness.

After four meetings, his indicator is "+5".

Joel Edmundson and Shi Theodore are in the lead ("+8").

In the second match of the season, he scored a puck against Pittsburgh, after which he remained silent for two meetings.

He could distinguish himself again only in the confrontation with Boston.

The defender assisted captain Claude Giroux, but that didn't save Philadelphia from their second defeat of the season.

The main and extra time ended with a score of 4: 4, and the Bruins turned out to be more successful in the shootout.

Meanwhile, the situation is developing around the Russian hockey players "Washington", who violated the NHL security protocol to combat the spread of coronavirus.

This was announced by the head coach of the Capitals Peter Laviolette.

“Now the hockey players are in quarantine.

At the moment, as I understand it, we are talking about four games.

Then the hockey players will have to reconsider the status, after which a decision will be made.

Most likely, some kind of statement will be published.

So far, this is the case.

We are considering all options, "- quoted by Lavioletta press service of the NHL.

Of course, the absence of four key players will be a hard blow for Washington.

It is all the more offensive that the team will play the next four games at home, and two of them will be played against an opponent who, given the leaders of the Capitals, had a good chance of winning.

First, Buffalo will come to Capital One Arena, having lost to Lavioletta's team twice this season, and then Islanders led by Varlamov.

At the same time, Orlov will have to be more offensive than others, who will not be able to play the 402nd match in a row in a Capitals jersey.

The Russian defender has not missed a single meeting since the 2013/14 season and has already made history in the length of the so-called iron series.

It also turned out that the decision to remove the Russians may be related not so much to their violation of the NHL protocol, but to the fact that they were in contact with a partner infected with COVID-19.

According to sources from The Washington Post, the goalkeeper of the Samsonov team tested positive for coronavirus after the match with Pittsburgh.

The hockey player was sent to isolation and returned to the capital separately from the others, the newspaper writes.

This information was commented by the wife of the captain of "Washington" Anastasia Shubskaya.

She reproached the management of the club for hiding information about the state of health of Samsonov and concluded that this was the reason for the removal of Russian hockey players.

“For all those who wrote that the guys broke the rule, so it was the right decision to remove them.

I am very glad that they told the truth, which I, of course, knew about, but considered it incorrect to disclose ... It was not that they broke the rule, but that the player got sick, the player who contacted all the players.

So why did they only say about our guys (keeping silent about the positive test initially)?

Well, in addition, let's remember the teams "Dallas" and "Carolina".

They honestly spoke about the sick players and paused the games, rather than looking for who contacted whom, and referring to “non-compliance with the rules,” said Shubskaya.