Kentin Mahé is he the real leader of the Blues?

With the absence of Niko Karabatic in Egypt, Kentin Mahé on the occasion of taking up the torch of the PSG player 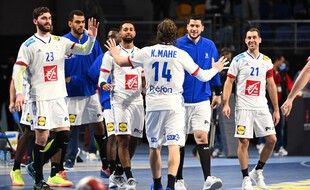 Kentin Mahé gains each time a little more weight in the French team.

After a mastered first round without any real wrong notes, and despite some sweating against Algeria Wednesday night with a victory torn away in pain, the France team is there at the start of the Egyptian World Cup.

And if it can obviously count on a collective whose cogs are gradually adjusting under the orders of Guillaume Gille, it still owes it largely to the form of its playmaker Kentin Mahé.

It was not, however, a foregone conclusion.

"There were doubts after the two games against Serbia, it must be said," readily admits his agent and friend, the former international François-Xavier Houlet.

Arrived in Cairo without any real preparation the day after his elimination in the Champions League semi-final with Veszprem against Kiel, and after a blank year marked both by knee surgery at the end of 2019 (which made him miss the last Euro) and the cessation of competitions with the health crisis, the boy acted as if it all slipped on him.

A leadership role that he takes very seriously in the field

As a result, he is the Blues' top scorer after five games (22 goals), with a nasty shooting success rate (79%).

Nothing surprising you will tell us since the player has already accustomed us to this level of performance during Euro 2018 and the 2019 world championships, two competitions from which he came out with the title of best scorer.

Used lately to play against employment at the position of left winger in the club, Kentin Mahé would have had the right to ask for a little time before taking over the attacking game of the France team as a half center.

Christian Gaudin, his former coach in Hamburg in 2014, does not hide his astonishment.

“That's what is strong with Kentin, is that even without having too many benchmarks lately in this position, he manages very quickly to find a big, big level, he said, admiringly.

Afterwards, we can always say that it's like cycling, that it can't be forgotten.

Ok but there are still some automatisms to be had and I must say that I was surprised to see him so comfortable so quickly in the France team in this position.

Commenting on the next Blues match on beIN Sports, Friday night against Iceland (6 p.m.), François-Xavier Houlet did not fall from his chair.

“Kentin is a free spirit, but always since he was a kid.

Moreover, he is a bit like that in life too (even if he has calmed down a lot over time), he's someone who wants to discover everything, the world, people, activities, he is touch all.

And in the field it's the same.

Him, it matters little to be on the left or in the center.

It's not a problem.

What has changed, however, is that when you give him this role of playmaker, hey well he really leads the game, he takes this role very seriously and we can count on him.

A leader by example more than a locker room barker

On the ground, Kentin Mahé therefore seems to have succeeded in filling the immense void left by Nikola Karabatic, forfeited in Egypt because of a filthy rupture of the anterior cruciate ligament of the right knee.

But what about outside?

Should he also win in the locker room as can the leader of PSG usually?

For his father, the former Barjot Pascal Mahé, there is no doubt.

On the phone from the parking lot of the Pôle Espoir where his U18s will start their match, he is categorical: “In relation to his personality, to what he is capable of doing, what he has produced and what he is still capable of producing, of course he has the stature of a leader ”.

On this point, Christian Gaudin wants to be a little more reserved.

“For me Kentin, even though it's not the same game, I would compare him more to Jackson [Richardson] than to Nikola.

He's more of a behavioral leader on the pitch, because of what he brings to this team in the game. I don't think he's a locker room leader, he's a fairly reserved person, judge- he does.

He is especially at work, he is incredibly obstinate and, inevitably, unconsciously he sets the example to others.

The center-half of Veszprem is the top French scorer at the World Cup in Egypt.

For the beIN consultant, “leadership in the broad sense of the term goes beyond play and success, it's something else.

It happens during time-outs, before matches in the locker room.

"" I know they distributed the tasks well in the group at that level, but I don't know if Kentin really has this role, he says.

It's not in his DNA.

It doesn't mean he doesn't care but… [he thinks].

It's funny, he's going to be 30 this year but he still has this image of… No kid, but a little wisp.

He does not have the patriarchal image that one can have of a leading half-center.

What is very important to him is that he has won the confidence of his teammates.

“This allows him in this title to lay the foundations to establish himself in the future as the player who weighs both on and off the field.

To know if the leader of the Blues has the shoulders for, the best is still to give the floor to the father.

There is a duty from the moment you wear the jersey of the France team, he warns.

Maybe sometimes you have to force the line a bit, but Kentin is a person with a strong character and I don't think he necessarily needs to overplay in this register.

We see that he wants to do battle, to pass on, to share with his friends.

It was important to see it in this exercise, it sends back positive images to the whole group, it bodes well for the future.

“Since this phone call, the Blues have unfortunately delivered a more than bland copy Thursday against Algeria, even if the entry into play of Mahé in the second period allowed them to get out without too many injuries.

This is also what a leader should be used for.

Handball World Cup: "We no longer had a choice, we had to let go" ... How the Blues changed in no time

Handball World Cup: "He puts himself at the service of his boys" ... Does Guillaume Gille have the shoulders to shake up the France team?