Sharjah needs 4 technical conditions to stay in the lead, most notably the re-registration of Jonathas

Athletes have set four technical conditions that Sharjah needs to maintain the top of the Arab Gulf League for football and to retain the title it achieved before last season, noting that these points are to continue the current technical plan followed by coach Abdulaziz Al-Anbari in leading the team 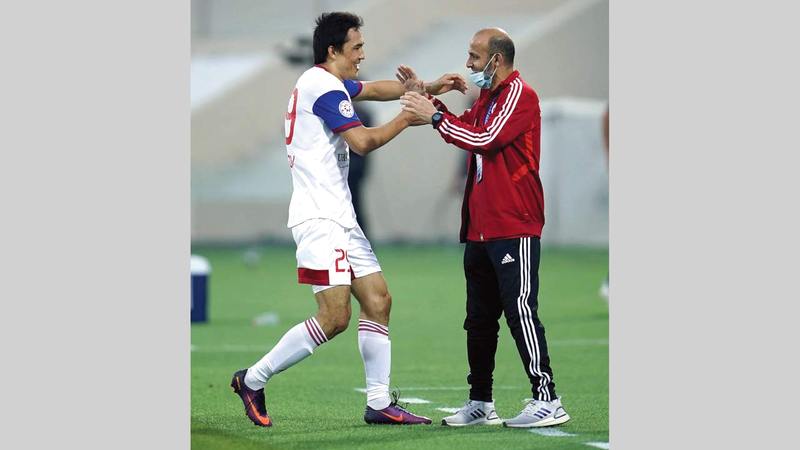 Analysts stress that "the king" will face difficulties in the return leg ... and confirm:

Sharjah needs 4 technical conditions to stay in the lead, most notably the re-registration of Jonathas

Athletes have defined four technical conditions that Sharjah needs to maintain the top of the Arab Gulf League for football and to retain the title it achieved before last season, noting that these points are to continue the current technical plan followed by coach Abdulaziz Al-Anbari in leading the team, which has proven useful in the role The first, besides maintaining the stability of the team, and not making new contracts, the team may lose the state of harmony it is in, with the exception of recruiting a defender in the place of the injured Khaled Al-Dhanhani, and then re-enrolling the Brazilian striker Jonathas in the event that Caio Lucas’s absence is prolonged due to injury, stressing that the team’s mission It will not be easy in the return leg, and it will face difficulties, especially by the competitive teams that seek to strengthen their ranks with new elements during the summer transfer period.

They told Emirates Today: “One of the important positive things is that Sharjah currently has a strong bench, and it is no longer dependent on one player to make the difference, as it used to be, as he used to rely only on Igor Kornado, but now he has more than one player. He can make the difference, like Igor, Wilton Suarez, Luan Pereira and Kayo Lucas before his absence due to injury.

Sharjah deservedly won the winter champion title, with a total of 32 points, after winning 10 matches, tied in two matches, and lost in only one match against Baniyas.

The former coach of the national football team, Dr. Abdullah Misfer, considered that there are several factors that led to Sharjah's superiority in the league, foremost of which is the great administrative support, the ability of national coach Abdulaziz Al-Anbari to lead the team, as well as the team spirit, and the high desire of the players to excel, And the presence of an organized team, the players' understanding of the coach's thinking, the presence of distinguished players that make the difference in the team's ranks, whether they are citizens or foreigners, and the team's failure to rely on only one player as it was in the past, as the team was dependent on Igor Kornado, but now there are more From a player who can make the difference, in addition to having a successful club management that silently supports the team from outside the stadium.

He told «Emirates Today», that «Sharjah needs to continue the same plan that led to his supremacy in the first league, and support, and stability over the existing players, and to avoid the injury of an important player such as Igor, with the return of the player Caio Lucas, and the return of Saif Rashid to shine. The team needs a back in place of the injured Khaled Al-Dhahanani.

Mesfer indicated that Sharjah also needs the return of the player Khaled Bows to shine and restore his true form.

For his part, the coach of the Olympic team and the former reserve team of Sharjah Club, Abdul Majeed Al-Nimr, stressed that Sharjah relied in the first round on serving himself by himself, without waiting for the results of other teams to serve him, and he should continue the same approach, considering that one of the important points in the team is that He is not affected by the absence of a player, as was the case in the past, as he was very dependent on Igor, pointing out that Sharjah currently has a strong bench.

Al-Nimr stressed that "among the deficiencies that need support in the team is the presence of a substitute player for Cayo Lucas in the event that he was absent from the team for a long time due to injury, as well as a substitute player for Khaled Al-Dhanhani," considering that "the solution in this case is to register the Brazilian striker Jonathas again in the team's ranks." ».

Al-Nimr stressed the importance of the players' lack of confidence in themselves, and continuing in the second round at the same level that they presented during the first round of the league, and that they consider every match in the league difficult and not easy, especially since the levels of teams in the league are very close, whether at the level of the front or back teams. .

Al-Nimr pointed out the importance of the rising player Abdulaziz Al-Kaabi being able to play, as he is a talented player and has potential.

Al-Nimr considered that Sharjah needs to stabilize its current elements, and not to undertake new polarizations that may lead to the loss of the state of harmony experienced by the team.

For his part, Sharjah goalkeeper coach Hassan Ismail confirmed that "the second round matches for Sharjah will be the cup final, given that the other teams will play in front of him with great strength, and they will have strengthened their ranks during the current transfer period of players," noting that "the teams From which Sharjah was taking three points in the first round, it will play before him in the second round with all ferocity, ”considering that“ Sharjah is nevertheless able to continue the positive results it achieved in the first round. ”

In turn, the former coach of the Emirates Team, Tunisian Noureddine Al-Obeidi, confirmed that Sharjah is an integrated and homogeneous team, and has an excellent reserve bench that is no less valuable than the main players.

Al-Obaidi added, "Dealing more confidently with the competing teams, and not respecting the competitors, made Sharjah lose some points that were within reach in the first round, but in general the team is moving in the right way, and it is the first and only candidate to win the league title."

The 4 technical points that Sharjah needs to continue at the top:

1- Al-Anbari continues with his current technical plan, which has proven useful and not changed.

2- Maintaining the current stability of the team and not abandoning any player.

3- Not to do new polarizations that may lead to the team losing its current harmony, except for recruiting a substitute for the injured Alhanhani.

4- The striker Jonathas re-enrolled in the place of Caio in the event that the latter’s absence was prolonged due to injury.