The main intrigue of the UFC: why Nurmagomedov and White are in no hurry to announce the results of their meeting

UFC lightweight champion Khabib Nurmagomedov met with the president of the promotion Dana White, during which the question of a possible resumption of the Russian's career was to be discussed. Neither side commented on the results of the negotiations, and the head of the promotion did not appear in the media space. At the same time, on January 23, a fight between Dustin Poirier and Conor McGregor will take place, who has already acquired the status of a battle for the title of the first contender, and if Nurmagomedov refuses to continue his career, he may become a champion. 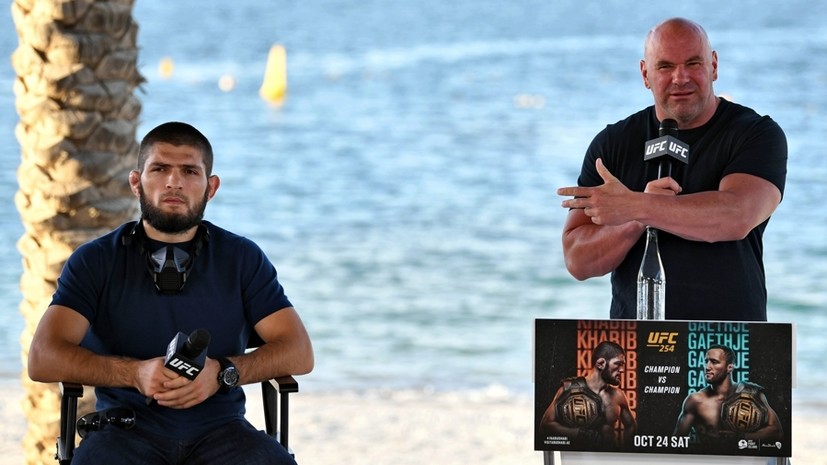 On January 16, Abu Dhabi will host the first Absolute Fighting Championship in 2021, in which former UFC featherweight title holder Max Holloway will face # 6 Calvin Catter in the main event.

Nevertheless, the main attention of MMA fans is not focused on the participants of the future show, but on the reigning lightweight champion Khabib Nurmagomedov.

On Friday, January 15, a meeting took place between the fighter and the head of the promotion, Dana White, during which the functionary planned to dot the i's on the question of the possible continuation of the Russian's career.

As it became known to the media, it took place during the UAE Warriors MMA tournament, at which several close acquaintances of the champion took part.

This was confirmed by White himself, posting the corresponding video on Twitter.

However, since that moment, no information has emerged regarding the outcome of the negotiations.

Dana no longer appeared in the media space, and Khabib limited himself to only two posts on Instagram.

In one, he published a video with a parody of the last meeting, and in the other he shared his impressions of attending the show and congratulated his teammate and, concurrently, EFC President Shamil Zavurov on the victory.

Seven close people of mine performed, how hard it was, without doing anything to prompt and observe.

Both victories and defeats are all from the Almighty, do not take this more than a sport.

Much more important things are happening behind the cage.

I wish everyone health, ”Nurmagomedov said in a statement.

At the moment, the MMA community is awaiting the outcome of the conversation between Nurmagomedov and White, but so far there is no reason to believe that they will be announced in the near future.

The fact is that the possible continuation or end of the Russian's career will seriously affect the situation not only in the lightweight division of the organization, but also in the entire UFC as a whole, as a result of which the management needs to make appropriate preparations.

If the Russian remains adamant and decides to hang up his gloves on a nail, then it is possible that the promotion will try to minimize losses and play the belt next week - in a duel between Conor McGregor and Dustin Poirier.

The fact that the main fight of UFC 257 could become the title fight was said exactly from the moment Nurmagomedov announced his retirement from the sport.

With the recent defeats of Justin Gaethje and Tony Ferguson, McGregor and Poirier remain the last worthy candidates for the trophy.

Both are category stars and have victories over strong opponents.

Yes, to a greater extent this applies to Dustin, who dealt with Dan Hooker in the last fight.

But you shouldn't write off Conor either.

Although Donald Cerrone, on the eve of meeting with him, won only four fights out of ten, he remained a dangerous opponent.

White himself denied that the lightweight belt could be played in the battle between McGregor and Poirier, and only in early January announced that its winner would be the first challenger.

But there is no doubt that the promotion was already considering a similar option in October.

The UFC is famous for its ability to arrange major fights, and this is impossible without building a clear development strategy for each division.

Suffice it to recall how skillfully the fight between Conor and Khabib was arranged.

The promotion began at the show in New York in November 2017, after which everything possible was done to raise the degree of tension between the athletes.

Suffice it to recall at least the decision to card one event of Nurmagomedov and the Irish teammate Artyom Lobov, who had criticized Eagle some time before in an interview.

It is worth noting that this time the promotion also tried to act rather cunningly.

Until recently, there were rumors that the negotiations between Nurmagomedov and White could have taken place precisely during UFC 257, which would have made it almost inevitable for the Russian to meet the Irish.

At the same time, Khabib's cousin was prudently included in the card, who was supposed to conduct his debut battle under the auspices of the championship.

But later, the fight with the participation of Umar was decided to be postponed three days ago and arranged at UFC Fight Island 8. It is possible that the lightweight champion himself insisted on this, who did not want to cross again with McGregor.

It can be assumed that this indirectly hints at Nurmagomedov's desire to adhere to a given course and leave a career in MMA.

After the announcement that the main fight of UFC 257 will carry the status of a candidate, the circle of possible rivals of the Russian was reduced to two people.

And judging by the champion's statements, none of them is of interest to him.

A little more than two rounds were enough for him to defeat Poirier, and although McGregor lasted longer, he could not make a decent competition.

Yes, in another interview, the Irishman recalled that then he was "the worst version of himself", but this can hardly be considered an excuse.

Perhaps Nurmagomedov had already decided everything, and therefore wanted to discuss this with White as soon as possible.

Firstly, to stop speculation on this topic, and secondly, to give the promotion additional time to discuss further actions.

During the press conference, Khabib said that he hopes for close cooperation between his EFC and UFC leagues, and therefore he is unlikely to want to spoil relations with Dana.

But it is worth considering another option, in which Nurmagomedov still decides to fulfill the dream of his father Abdulmanap and try to end his career with a record of 30-0.

Earlier, he jokingly admitted that a generous offer from the UFC in the amount of $ 100 million could have contributed to his return to the octagon.Taking into account the fees of MMA fighters, the promotion is unlikely to agree to this, but under certain circumstances it may well elevate the Russian to the status of the highest paid representative mixed martial arts.

This can only happen if McGregor defeats Poirier and becomes the first contender for the lightweight title, which will automatically lead to a rematch with Nurmagomedov.

The first duel between fighters became the largest in the history of mixed martial arts and has every chance to maintain this status for a long time.

Now in the world of MMA, there is not a single confrontation that has the potential to become as loud and discussed, and only Khabib and Conor themselves can surpass the success of the first battle.

Surely, some may assume that a duel between Nurmagomedov and Georges Saint-Pierre can cause a similar resonance, but such a prospect raises serious doubts.

The Canadian completed active performances at the end of 2013 and has entered the cage only once since.

Yes, at one time he was one of the most popular MMA fighters and is deservedly considered a sports legend, but he is practically unknown to the young audience.

It will be extremely difficult for the UFC to "sell" the battle between a Russian and a Canadian, especially given the fact that during its promotion one should not expect violent conflicts.

Opponents respect each other very much and will not stoop to mutual insults.

And as experience shows, such confrontations are rarely obtained at the box office.

The potential for a return match between Nurmagomedov and McGregor is enormous, as a result of which the promotion will not skimp on fees.

Undoubtedly, one cannot count on $ 100 million, but it is possible that the fighters will be able to receive a quarter of this amount.

Therefore, there is a possibility that the UFC is waiting for the end of the fight between McGregor and Poirier in order to finally resolve the issue with the return of Nurmagomedov.

If the Irishman wins, White is in a winning position and can promise mountains of gold to the Russian.

While the success of the American virtually negates all the plans of the organization.

The fight with Dustin does not have a high financial potential, and in this case there is neither the opportunity nor the point to offer Khabib a record fee.

In this case, matchmakers will either have to switch their attention back to Saint-Pierre, or look for other options.