Trashtalk from 'legend' Hari did not impress 'calm' Adegbuyi

With the knockout on Badr Hari, kickboxer Benjamin Adegbuyi booked one of the best victories of his career on Saturday. Rico Verhoeven's training partner struck surprisingly at the start of the third round. 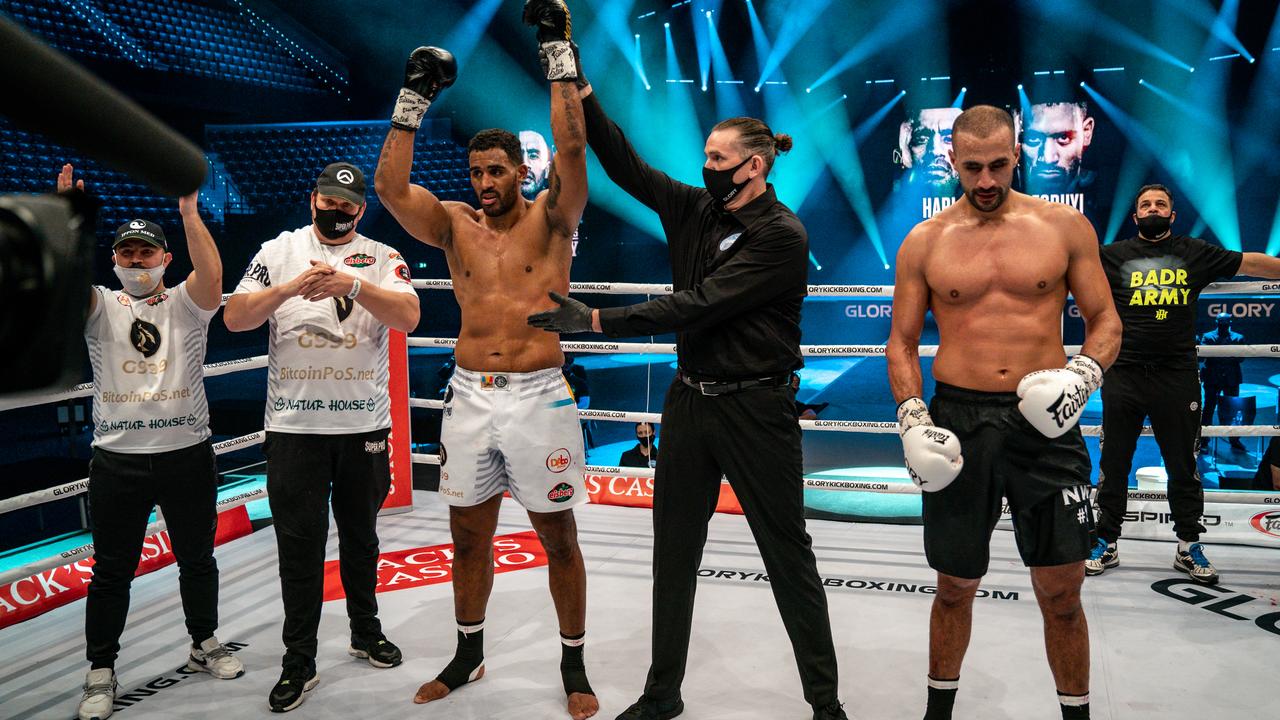 With the knockout on Badr Hari, kickboxer Benjamin Adegbuyi booked one of the best victories of his career on Saturday.

Rico Verhoeven's training partner struck surprisingly at the start of the third round.

A few minutes after the fight in Rotterdam, Hari was already on his way home.

The Moroccan Amsterdammer did not like interviews and got into the car with probably a broken nose.

Beforehand, Hari still felt like talking to the press.

He announced a knockout win in the first round and compared the kickboxing match with Real Madrid against sc Heerenveen.

"He knows well how to sell a fight," said Adegbuyi

"I knew it wouldn't go as he predicted. It was going to be a tough fight. I told him I was going to hurt him."

According to Adegbuyi, Hari's statements matched his image.

"This is his way of portraying an image. He does that well, but I didn't let it distract me because I'm a calm boy. I was extra eager to prove that it wouldn't work out like Hari said."

Adegbuyi only gave Hari his sixteenth defeat in 122 games.

"He is a legend in our sport. That's why this is one of my best victories," said the Romanian.

`` Benny could only place a counterstoot when Hari slowed down ''

The first two rounds in Rotterdam went to Hari on Saturday and when Adegbuyi got an eight count at the end of the second round, his end seemed near.

But one hit on the nose from Hari at the beginning of the third round changed everything.

Hari went down twice in a short time with a heavily bleeding nose and did not get up again.

Adegbuyi's trainer Dennis Krauweel said the fight had largely gone according to plan.

"Hari is a very intelligent fighter, who is always dangerous with his explosiveness, but physically 'Benny' is stronger. And 'Benny' has a very good counter-strike, but he can only place it well when Hari slows down a bit. the third round the case. "

Adegbuyi after the fight, with trainer Dennis Krauweel on the right.

Adegbuyi after the fight, with trainer Dennis Krauweel on the right.

The world champion spared many times with the Romanian in recent times.

Verhoeven called his training partner ten minutes before the fight.

"Rico is a friend, I'm grateful for his help. He said keep calm and don't make mistakes, you will win. Still made a mistake in the second round, but the end result is the most important," said Adegbuyi.

In the thirteen weeks before the fight, Adegbuyi trained daily in the Netherlands with Krauweel and Verhoeven.

During that period he was only with his family in Romania for a week.

"This sport is all about sacrifices. I am really happy that the training camp is over, because it was very tough. Tomorrow I will be on the first plane to Romania to celebrate Christmas with my family."

Hari is sitting in the corner of the ring with a bleeding nose.

Hari is sitting in the corner of the ring with a bleeding nose.