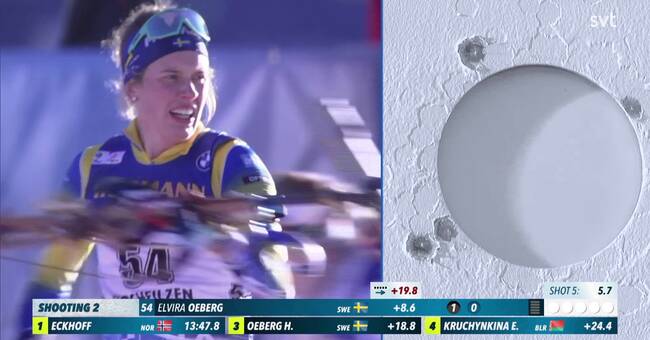 Elvira had a boom in the first shot and had a bit of a hang on the podium when she went out on the final lap in the sparkling sunshine in Hochfilzen.

- I felt refreshed in my body and knew that Tiril was going very fast.

A little sad that it was a boom in lying down even though it felt good but very nice that I shot fully standing.

I tried to stay focused and told myself not to neglect anything, says Elvira Öberg to SVT.

Big sister Hanna, just like Elvira, had a boom in lying and finished sixth, was two seconds behind the little sister in the finish.

Hanna Öberg about the Norwegians: "They must have had terrible skis"

- I am happy with my race and felt the first barrier lying around.

Of course it is sour but I have a good feeling and a good starting position before the start of the hunt tomorrow, says Hanna Öberg who comments on the Norwegian dominance.

- We saw it already yesterday.

They were strong and must have had terrible skis, says Hanna Öberg.

Tiril Eckhoff, just like the sisters Öberg, had a boom but went by far the fastest of all today (was 20 seconds ahead of Röiseland) and was able to win ahead of the Norwegian national teammates Ingrid Tandrevold and Marte Olsbu Röiseland.

- I have made some adjustments with the shooting trainer that gave effect and the body felt good, says Eckhoff.