Sundh to hospital after nasty tackle

Oscar Sundh in Oskarshamn was badly tackled by Örebro's Emil Larsson. Sundh was initially motionless on the ice before being taken to hospital by ambulance. - This is what we want to get away from Swedish hockey, says Oskarshamn's sports director, Thomas Fröberg, to SVT Sport. 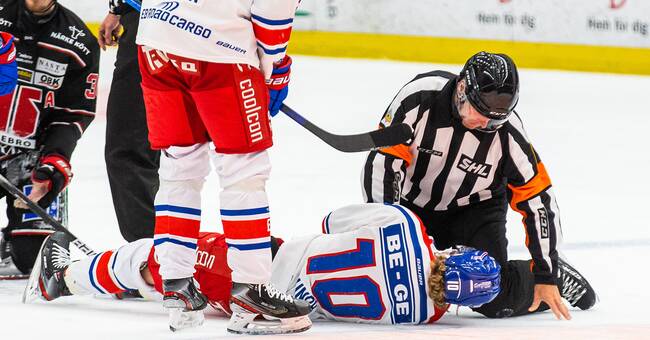 It was with nine minutes left of the third period with a 2-1 lead for Örebro that the incident occurred.

Oscar Sundh was the puck leader in the middle zone, when he played away the puck and then was tackled hard by Örebro's Emil Larsson who came in from the side.

The tackle seems to be in his head and Sundh was left lying on the ice after the blow.

The stretcher came out on the ice and when it was rolled out with Sundh, the IKO player could at least raise a hand and wave to his teammates.

"Should have been fired"

Thomas Fröberg is sports director in Oskarshamn and is critical of the tackle.

But even more so for how the situation was handled from Örebro's side, which was the home team for the match.

- It is a blind side in my opinion and this is what we want to get rid of in Swedish ice hockey.

His intention is to take Sundh when he goes over there and give him a stopper.

It is not that he can not move but he goes straight against him, says Fröberg to SVT Sport and continues:

- Since they do not show it on the jumbotron ... there you are wrong in my opinion.

That someone is sitting and doing this and not showing such a thing when we want to get rid of things like this.

That you can not show it to the judges, whoever sits and does not do his job there should be fired.

Did not see replay pictures

The rulebook says that the referees must not go out and look at tackling situations, but must see replays of the jumbo throne in the arena.

No such person was ever shown and the judges therefore had to start from what they had seen when the situation took place, explains one of the main judges, Sören Persson, in C More.

- As we judge you on the ice, the tackle comes from a player who does not make any upward movement.

We can not decide on the ice if it takes in the head.

We are four judges who agree there and then.

We do not think the Örebro player is doing anything ugly.

Unfortunately, we do not get a repeat of the jumbotron, which is unfortunate, which we must get in order to make the assessment.

There is nothing disrespectful and we do not think there is deportation there and then.

Sundh was taken to hospital after the beating and is said to have suffered a severe concussion, according to sports director Fröberg.

There is no bleeding but there is a severe concussion.

He has texted his girlfriend that it feels okay and that she can be calm.

It still feels nice when it looked terribly bad on the ice.

What do you think will be the result of the tackle?

- He will get five matches.

Now the situation room should look at what they should have looked at directly.

But it will now be done tomorrow morning at eight o'clock, Fröberg concludes.