Al-Wahda jumps to second place ... and Ajman's future in the league is "gray"

Al-Wehda achieved its third consecutive victory, after defeating its guest Ajman by three goals without a response, in the match that brought them together yesterday, at the end of the sixth phase of the Arab Gulf Football League. And the owners of the land finished the first half with two goals that came through, Yahya Al-Ghassani «22 », Feces 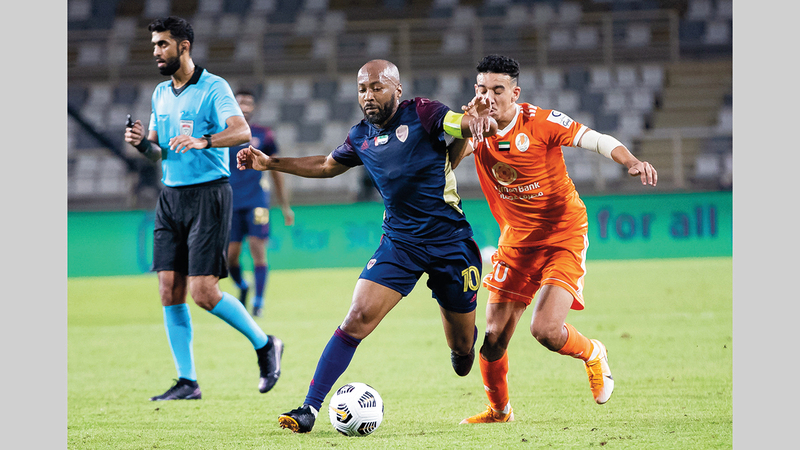 He won with 3 clean ... and rain wasted a penalty kick

Al-Wahda jumps to second place ... and Ajman's future in the league is "gray"

Al-Wehda achieved its third consecutive victory, after defeating its guest Ajman by three goals without a response, in the match that brought them together yesterday, at the end of the sixth phase of the Gulf Arab Football League.

The owners of the land finished the first half with two goals, which came through, Yahya Al-Ghassani (22), and the Brazilian, Gianluca Muniz (25), and Muhammad Al-Minhali concluded the goals (80).

Al-Wahda jumped two places on the ladder of the general ranking of the Arab Gulf League table, to climb to second place, behind Sharjah leaders with 13 points, which is like Al-Nasr's third-place score, while Ajman's balance remained at two points, retreating to 12th, to increase the team's position under the leadership of the coach, Ayman Gray, difficult.

Al-Wahda did not take matters seriously during the first minutes, so he appeared at a lower level than expected, despite the opportunity he had in front of Ajman's goal, and Yahya Al-Ghassani wasted it very strangely.

With the passage of time, the visiting team began to gain confidence, and succeeded in threatening Al-Annabi on more than one occasion, the most dangerous of which was a header that William Osso played without being an observer, but it overcame the crossbar.

The unit was able, after a long wait, to visit the window of Ajman from a lapse of defender Saad Sorour, which Yahya Al-Ghassani took advantage of in scoring after two attempts, as the first sent away goalkeeper Ali Al Hosani.

Ajman had no reaction after this goal, unlike Al-Wehda, who controlled the course of the game and pressed to score another goal. Indeed, the left-back Muniz managed to shoot a ball from a distance that settled to the left of goalkeeper Ali Al Hosani, who is responsible for this goal.

The Ajman team collapsed completely, and its players retreated to their half of their stadium, fearing to receive any other goals, so the professional duo, William Osu and Traweli, remained isolated in the front line, so their danger was null.

Al-Wehda almost hit Ajman with the third goal from a perfect pass by Ismail Matar to Myung Lee, which put him in the face of the goal, but he did not use the opportunity optimally.

Matters became more difficult for Ajman, who deprived the defender, Emmanuel Aguikale, as he received a direct expulsion, for obstructing him while he was alone in the goal.

The excitement reached its extent only one minute after the start of the second half, after the Ajman goalkeeper signed the forbidden and committed a mistake against Matavz, the referee deemed it a penalty kick after confirming the mouse technique, which was confronted by Ismail Matar and the goalkeeper rescued her.

The Ajman goalkeeper continued to defend his goal valiantly when he twice dealt with a header from Ismail Matar, which bounced back to the substitute Tahnoun Al Zaabi, to succeed again in countering his shot.

The unit managed to score for the third time after an interval of passes that ended with Muhammad Al-Minhali, who preceded the Ajman defender and deposited the ball easily into the goal.