Hassan Zahran's season ends with Ajman after "knees" were injured

The doctor of the Ajman Club, Tariq Sadiq, said that the current football season for defender Hassan Zahran has ended following the injury he suffered in the Al-Nasr match in the third round of the Arabian Gulf Football League, and he underwent surgery last week. P 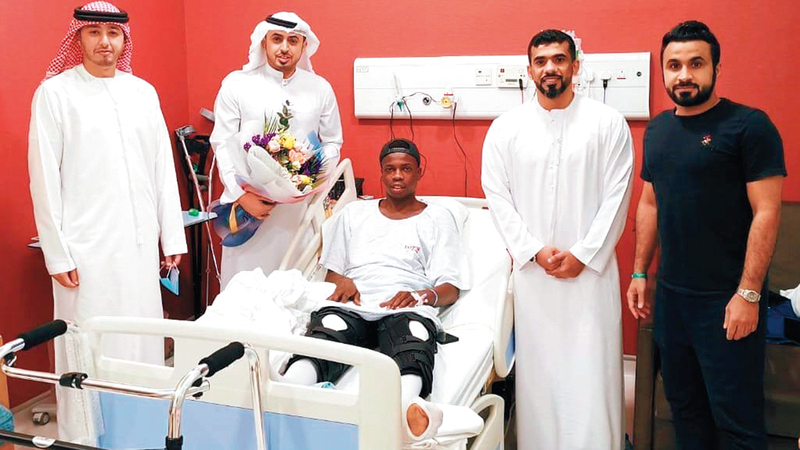 Sadiq: What the "orange" defender was subjected to has not happened throughout history

Hassan Zahran's season ends with Ajman after "knees" were injured

The doctor of the Ajman Club, Tariq Sadiq, said that the current football season for defender Hassan Zahran has ended in the wake of the injury he suffered in the Al-Nasr match of the third round of the Arab Gulf Football League, and he underwent surgery last week.

Zahran had fallen to the ground in a shared ball with one of the Brigadier’s attackers, and because of that, he was forced to leave the field and go directly to the hospital.

Medical examinations confirmed that the player needed to undergo a double surgery in the left and right knees, which was performed for him in a hospital in Abu Dhabi.

The Ajman doctor added to "Emirates Today": "Hassan Zahran's return to the stadiums needs a long time, because the injury was not in one knee, but unfortunately in both, and that injury has never been suffered by any footballer throughout history, and it also does not occur. For any ordinary person, and this is not just my words, but it was the consensus of many doctors who started treating the player, and the medical team who performed the operation for him.

He explained: "The injury occurred in the knee bones, or what we call" knee soap ", and unfortunately it was the result of the player falling to the ground in a joint ball, and the Al-Nasr striker had no involvement in it, and the truth is a (fate) injury in the first place, and the player will need a while A long period of treatment and rehabilitation will be difficult, and even impossible, to catch up with the current season.

Tariq Sadiq expressed his regret for what happened to defender Hassan Zahran from that injury, indicating that the player is one of the main elements in the Ajman squad, stressing at the same time the player's ability to return to what he was before that injury.

On the date of the return of the injured to the Ajman squad again, he said: “There are great efforts made by the club’s medical team throughout the day to quickly complete the treatment of the injured.

The number of injuries in Ajman Club increased to 10 players after the Baniyas match, after Ghanaian William Oso joined the list.

Tariq Sadiq said: “Saad Sorour is 100% ready for the Al-Wahda match next Saturday, in the sixth round of the League Championship, as are the professionals William Oso and Diego, and there are also possibilities that defender Walid Al Yamahi will join them, and the estimates of the participation of this trio are currently subject to the technical vision of the coach. Ayman al-Ramadi ».

He continued: "Rashid Hassan participated in some periods of the Fujairah match in the Arabian Gulf Cup, and there are efforts being made with defender Abdullah Saleh, and his return to the stadiums will soon be."

Tariq Sadiq confirmed that there were estimates we had at Ajman Club that some players might be injured at the beginning of the season, for several reasons, the most important of which is the players ’interruption of training for a long time due to the Corona pandemic, and the lack of preparation period in sympathy for the time period that exceeded the four months.

He said: "I do not expect that the injuries will be like this inside Ajman or in the rest of the clubs during the coming periods, after the players began to regain their technical and physical readiness."

Yesterday, the Ajman team returned to training after a negative rest that the players got for two days after the match between Fujairah in the Arabian Gulf Cup, with a score of 1-2, to officially bid farewell to the competition.

■ Number of matches in the league: 49 games.