Rögle beat Brynäs 4-1 and shadows Frölunda in the table despite two fewer matches played. Brynäs had not played since October 27 and was rusty, which Rögle took advantage of and celebrated in a pandemic. - It was a great advantage that we got to play on Tuesday, says Rögle's coach Cam Abbott. 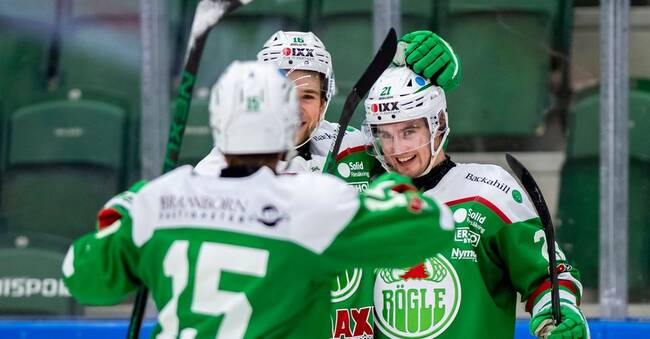 After the victory, the Rögle players celebrated with knuckles, gloves and clubs.

After yesterday's pandemic shock in ice hockey, the effect was seen in Ängelholm.

In the middle of the third period, Lukas Ekeståhl-Jonsson shot and Nils Höglander picked up Samuel Ersson's return and was able to sneak in 3-1 and decide the match.

Erik Andersson put 4-1 in an empty cage in the final minutes.

- It was a great advantage that we got to play on Tuesday.

The players were hungry and we can put in anyone, they work so well for the team, but we must remain humble, says Rögle's coach Cam Abbott to C More.

On Tuesday, Rögle won the derby against Malmö and was up in rounds after the national team break.

Brynäs had rested for 16 days since the match against Örebro on 27 October.

- It was a too uneven performance.

We have some good times but they are too few.

We are too eager and go away.