Dasilva: The performance in the Ajman match was not good ... and we achieved the most important thing

Al-Ittihad Kalba, the Uruguayan coach, Jorge Da Silva, confirmed that his team achieved the goal for which he came to Rashid bin Saeed Stadium in Ajman, and succeeded in returning with the three points. One of the end of a 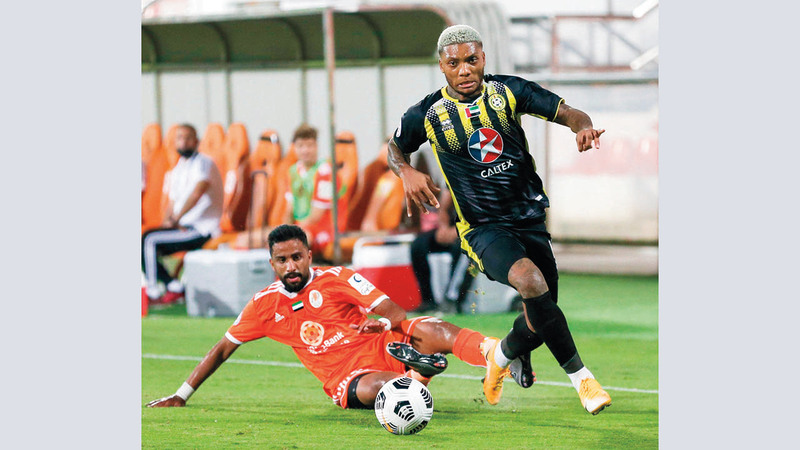 The Kalba Federation knot continues in front of "Orange"

Dasilva: The performance in the Ajman match was not good ... and we achieved the most important thing

Al Ittihad Kalba’s Uruguayan coach, Jorge Da Silva, confirmed that his team achieved the goal for which he came to Rashid bin Saeed Stadium in Ajman, and succeeded in returning with the three points.

Ittihad Kalba narrowly beat Ajman with a goal without response, scored by Togolese Bennel Malaba, one minute before the end of the match that brought the two teams together in the second round of the Arabian Gulf League.

He said in a press conference: "Our performance in the Ajman match was not the way I aspired to, but we came out with what was most important and got the victory."

He added: "The two teams entered the meeting under similar circumstances, which made the confrontation difficult for us and for them, so it was clear at some times of the match that each party was afraid of defeat, but thanks to Malaba's skill, we were able to hijack a target at a sensitive time in the match."

He pointed out: "The difficulty of the meeting was not for us that we lost the first match against Al-Ahly's youth, but the difficulty was in the absence of three important elements, namely: Sultan Al-Zaabi, Sultan Adel and Ahmed Lotfi, which prompted us to make adjustments in some players' centers to face the absence of these names."

The last three matches, which brought together the Kalba Federation with Ajman on both the official and friendly levels, witnessed a clear advantage for the "Tigers", as he succeeded in beating Ajman with a score of 6-2 during a match that brought them together in the return stage of last season, and Kalba regained his superiority with a great result as well During the match that brought them together in the Sharjah friendly championship, last August, and won 4-1, to return and renew his victory, the day before yesterday, with a goal without a response.

Ajman previously defeated Al Ittihad Kalba in four matches against three, while it attended a goalless draw only once.

The coach, Jorge Dasilva, stressed that beating Ajman would lift a lot of pressure on the team in general before facing Al-Jazira in the third round, saying: “I am completely confident that the potential of Kalba players is high, and that the team still has a lot to offer in this league championship. Season, and as the matches go by, the Tigers will appear better than ever.

Al-Shehhi minimizes the consequences of losing to Kalba

Ajman midfielder, Mohammed Al Shehhi, played down the consequences of his team's second successive defeat in the Arabian Gulf League.

Al-Orange fell again with a goal without response to Ittihad Kalba, after losing the opening round to Al Dhafra 1-4.

Al-Shehhi said in remarks after the match: "During the 2017-2018 season, we could not win the first four matches in a row, and despite that we won eighth place at the end of the competition, and we are still at the beginning of the season."

He added, "We performed better than the last game. We had a good 85 minutes until he scored in our own goal, and the game as a whole was good for us."