Chinanews client, Beijing, October 13 (Reporter Li He) The smoke of the fierce battle between Liao and Guangdong in the CBA finals of last season seems to have not yet dissipated. In the new season, the teams will go out again. Although a "shortest offseason" made the two seasons so close, the pace of change in the CBA 2.0 era has not slowed down. Not only that, the multiple reforms to be implem 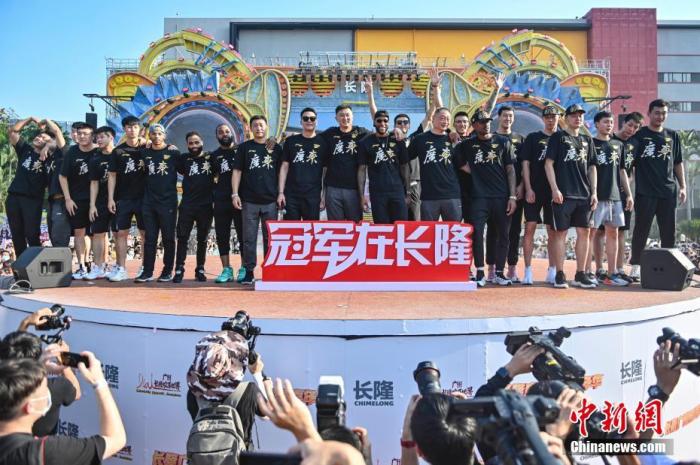 Chinanews client, Beijing, October 13 (Reporter Li He) The smoke of the fierce battle between Liao and Guangdong in the CBA finals of last season seems to have not yet dissipated. In the new season, the teams will go out again.

Although a "shortest offseason" made the two seasons so close, the pace of change in the CBA 2.0 era has not slowed down.

Four days later, on October 17, the CBA League will start its 26th season.

In fact, the preseason of the new season CBA will start today.

After experiencing a large-scale turnover of personnel during the offseason, the strength of the teams in the new season has also "reshuffled".

At the same time, according to the news announced at the CBA League conference on the 12th, there will be a number of reforms in the new season.

On October 11th, Guangdong Hongyuan Team held a parade for the 2019-2020 season CBA championship in the Changlong Tourist Resort in Guangzhou.

On October 17, the new CBA season will kick off again.

The new season will be the longest regular season season in the history of the CBA league, starting on October 17 and lasting until early May, with a time span of 6 and a half months.

A longer period means that teams need a more balanced overall strength to go further, instead of relying on one or two foreign aids.

According to CBA CEO Zhang Xiong, one of the reasons for the extension of the league is the increase in the number of league rounds and games, and the other reason is to leave a window for the national team.

Zhang Xiong said that in order to help the combined national team better prepare for the world preliminaries, the league set up two window periods from November 26 to December 4 and from 18 to 26 next year.

In fact, these two windows in the new season will also have a special effect on each team.

According to the previously announced "Regulations on the Registration and Registration of Players in the CBA League for the 2020-2021 Season", the window period of the new season will allow teams to trade players that have completed registration, and can claim free agents.

This will be the first time in CBA history to allow mid-season player mobility.

According to the statistics of the CBA company, during the offseason of more than two months, the CBA teams completed a total of 62 player transactions, including 17 transfers, 34 free agent signings, and 11 loans. In the two seasons, the number of player transactions was 43 and 42 respectively.

The number of transactions may continue to increase in the middle of the season, which also means that each team will have two adjustment opportunities in the mid-season after undergoing actual combat tests.

By then, perhaps an effective personnel adjustment will disrupt the league's strength rankings.

In addition, CBA also announced another provision that may instantly change the alliance structure, which is the foreign aid policy.

According to the regulations of the CBA League, the buffer period for foreign aid participation in the 2020-2021 season is used by teams to select foreign aid and handle related matters. The specific period is 47 days after the country opens foreign personnel entry policies.

In the playoffs, when playing against all-China teams, there were 2 players, 4 quarters and 4 players, and the last four teams (except August 1st) had 5 players in 4 quarters.

Matches between other teams apply 4 players, 4 quarters and 4 players.

At present, due to the epidemic, the CBA teams are not doing much in terms of foreign aid.

This means that once the buffer period arrives, the teams will enter a period of strength change.

After all, in the CBA today, the team's choice of foreign aid will still have a greater impact on its own strength.

CBA regulations on foreign aid policies before and after the buffer period.

In addition, as mentioned above, the rules for playing foreign players in the new season have also changed.

This also makes the head coach's formation more flexible and can choose "chess" for different opponents.

This also means that in extreme cases, there may be a total of 8 foreign players from the two teams in the CBA arena, with 8 or even up to 9 rotations on the field.

The season again prolongs the test of "family status"

The adjustment of foreign aid policy does not mean that domestic players will once again become supporting roles.

From a certain perspective, foreign players will only occupy each other's playing time, and will not "squeeze" domestic players from playing too much time.

According to the schedule, the regular season of the new season will be the season with the most games in history, with a record 56 rounds and a total of 560 games.

The extension of the season and the increase in games mean that the overall strength of the domestic players will be improved to ensure the stability of the team's record.

After the rematch of last season, the domestic players have seen a blowout growth.

Whether their performance can continue into this season, or how long they can maintain a high level of performance, will be the key to determining the league pattern in the new season.

The picture shows Hu Mingxuan of Guangdong team and Guo Ailun of Liaoning team in the game.

In addition, the new season CBA will be divided into 4 stages.

According to the current arrangement, the 12 rounds of 120 games in the first stage will continue to be played in a tournament system, and the venue will be in Zhuji, Zhejiang.

However, both the CEO of CBA and Chairman of the Chinese Basketball Association, Yao Ming, said that the subsequent game system arrangements will be decided based on the situation of epidemic prevention and control.

Yao Ming also expressed in his speech that he hopes to open more fans to the stadium during the season and resume home and away games.

Once this expectation comes true, it will definitely affect the rest of the game and the performance of the teams.

And all these changes that have taken place and may take place, are or will be, making the CBA league suspense in the new season doubled.