Who is the most pity? Who is the saddest reminder? Those "sweet and bitters" in the first stage of the Super League

Chinanews client, Beijing, September 29 (Bian Liqun) With Chongqing Dangdai defeating Shanghai SIPG 1-0 on the evening of the 28th, after two months of swordsmanship, the first stage of the Chinese Super League officially ended. Under the special competition system, the Chinese Super League with the "daily broadcasting" mode enabled is dizzying. The match interval of 3 to 4 days makes it too lat 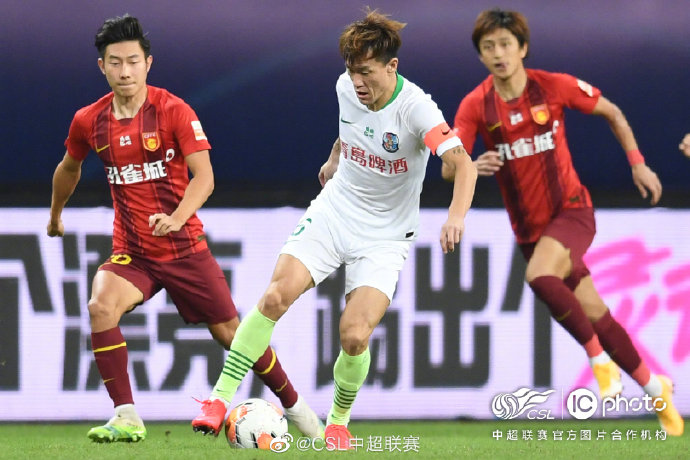 Chinanews client, Beijing, September 29 (Bian Liqun) With Chongqing Dangdai defeating Shanghai SIPG 1-0 on the evening of the 28th, after two months of swordsmanship, the first stage of the Chinese Super League officially ended.

Under the special competition system, the Chinese Super League with the "daily broadcasting" mode enabled is dizzying.

The match interval of 3 to 4 days makes it too late for the teams to stop and can only run hard.

Those teams that gritted their teeth and sprinted desperately at the last moment became the winners of this stage.

There is no doubt that this is the most dense and concentrated season of the Super League in history.

If the previous Super League season was a long-distance running competition and the competition was endurance, then this season is more like a sprint competition, which is more explosive and sprinting.

Now that the "preliminaries" are over, 16 teams will be on the runway again in half a month for a more exciting and cruel final match.

This is the charm of competitive sports, and under the special competition system, the Chinese Super League gives people a different feeling than before.

In the first stage of the final battle, Shijiazhuang Yongchang, who played in the All China Class, lost 0:4 to Beijing Guoan.

The staged Chinese Super League system this season is destined to be the four major battles in the first stage.

In the most intense stage, the strong team gathered in Group A once showed a 4 to 1 situation.

In Group B, there was a 4 win 2 situation, and the last moment was a very dramatic "universe shift". Wuhan Zall and Shijiazhuang Yongchang fell out of the top 4 in the penultimate round and fell short.

Compared with Group A teams like Shenzhen Kaisa, Guangzhou R&F and Dalian People who have been in a passive position for a long time in the Fourth World War, the taste that was once gained but lost is obviously more bitter.

In particular, Yongchang, whose value is lower than that of the Chinese First-Class team Changchun Yatai, has a record of winning the top three after Evergrande, Guoan and Shanghai SIPG. Today's results are really a pity.

In the final analysis, it still stems from the fact that the team is too weak with limited investment.

Under a long period of high load, Muric missed due to injury. Another core player, Matthews, also suffered injuries after leading his team to the first three consecutive Super League victories in team history.

This also made it difficult for Yongchang to send two foreign aids to fight in the four major battles with Chongqing.

Zall was in a similar situation. In the second half of the first stage, Evra had only one foreign aid in the front field. They were firmly in the top 3 of Group B in the first half. They achieved a terrible record of 1 draw and 4 losses in the last 5 rounds. Coach Jose So the get out of class ended midway.

But after all, it is difficult for a clever woman to cook without rice. After all, letting the coach leave school is a temporary solution, and the unstable factors brought about by the change of coaches will also bring hidden dangers to the second stage of extremely low fault tolerance.

The so-called "paradise to hell", Wuhan Zall and Shijiazhuang Yongchang unfortunately became the most bitter and regrettable team in the first stage.

Chongqing Dangdai defeated Shanghai SIPG 1-0 in the first stage of the final match and secured the third place in Group B with 6 consecutive victories.

On the stage of competitive sports, some are frustrated, and naturally some are proud.

Among the 16 teams, the most proud teams are Chongqing Dangdai and Hebei Huaxia Fortune.

I believe no one would have thought that the Chongqing team, which only achieved 1 win, 3 draws and 4 losses in the first 8 rounds, and the foreign aid was in place at the beginning of the season, could win Wuhan Zall and Shijiazhuang Yongchang in the second half of the direct dialogue. The 6-game winning streak ended and the counterattack locked the top four in the group.

Zhang Wailong, a South Korean coach who has become the "old rivers and lakes" of the Chinese Super League, already knows how to do it. Relying on the 4 foreign players with extremely strong individual capabilities and cost-effective frontcourt, he thoroughly implemented the defensive counterattack tactics.

Hebei China Fortune and Chongqing Dangdai have become the two dark horse teams in the Super League this season.

Hebei Huaxia Fortune also experienced low driving and high driving. They did not win the first four rounds. The foreign players also joined the team near the start of the game. With the continuous running-in, the team started a strong point-grabbing mode. It even defeated SIPG, tied with Guoan, won the direct dialogue with Zall and successfully entered the top 4.

Under the kneading of local coach Xie Feng, this team has always maintained a tenacity, and players such as Malkang and Yin Hongbo have also been stimulated to be extremely strong.

After the big names like Ravich and Mascherano left the team, the "civilian" Huaxia Happiness in Hebei has a special flavor.

In the final match, a 0-0 draw with Wuhan Zall, Tianjin Taida, who had 3 draws and 13 losses in the first stage, was the only unvictorious team in the Super League.

If in the first stage, which team is the most bitter and sad, the veteran team Tianjin TEDA may be reluctant to be elected.

After losing center Wagner, captain Mai Tijiang, and center defender Yang Fan, the TEDA team, which was drawn off the entire central axis, also lost the look of last season.

German coach Stillik dismissed get out of class halfway through, but after the local marshal Wang Baoshan took office, he still failed to reverse the situation.

The record of 3 draws and 11 losses also made Tianjin Taida the only team to lose in the first stage.

The continuous invincibility put a heavy burden on the players' backs. In the last round of the match against drow, Achim Peng, who was in hot form last season, once again missed a penalty and faced drow which was not in good shape. , TEDA failed to break the curse of invincibility.

And before the season, the outside world's ridicule about "win a game and relegation" under the special competition system seems to be more and more likely to be staged on TEDA.

If this magical drama can really be performed, although it is still difficult to save the face of the defeat this season, it is also a blessing in misfortune for TEDA.

However, in terms of the current state and ability of TEDA, it is not easy to achieve relegation in the second stage.

This depends to a large extent on the performance of the new aid Ahmedov and whether the rumored signing object has immediate combat power to help TEDA turn the tide in the second stage.

Shanghai Shenhua, who played in the all-China class, defeated Henan Jianye 2-0 in the first stage of the final match and entered the championship group as the fourth place in Group A.

Compared with Group B, the top 4 teams in Group A are not much different from the mainstream predictions of the outside world. However, in terms of the process, the process of Shanghai Shenhua's competition for tickets to the championship group can be described as very thrilling and difficult.

In fact, at the beginning stage, Shenhua's performance was pretty good. After the introduction of many powerful players such as Feng Xiaoting, Yu Hanchao, Qin Sheng, Zhao Mingjian, Shenhua's lineup was enhanced.

In the first five rounds of tough games, the team defeated Shenzu, Luneng, and Suning, drew with Dalian, and lost to defending champion Guangzhou Evergrande.

Objectively speaking, this is a performance with full gold content.

It was also the performance at this stage that laid a good foundation for Shenhua to compete for the four.

It also depends greatly on this to keep the top four in the case of seven rounds of victory.

Bi Jinhao (left), who scored consecutive goals in the second half, stepped forward despite the disorganized foreign aid and became one of Shenhua's heroes in entering the championship group.

The reason why Shenhua has such a big difference before and after is mainly due to Jin Xinyu's long-term injury and Shalawei who returned to the national team.

In addition, the veteran Moreno also suffered injuries under the intensive schedule, and Shenhua once had no foreign aid available in the frontcourt.

In this extremely unfavorable situation, the team still stubbornly continued to draw against Shenzhen Football, Luneng, Dalian, and Suning in the four major battles, keeping their points advantage.

In the last two rounds, they defeated R&F and Jianye and finally secured fourth place.

Under the training of South Korean coach Cui Kangxi, almost all the Chinese class Shenhua managed to get through with toughness.

I have to say that a solid team and experienced veterans helped Shenhua complete this almost impossible task.

The second stage of the Super League schedule.

In the next few days, players who have been in the competition area for more than two months can finally experience the "outside world".

After a short break, the players will return to the "two points and one line" game life.