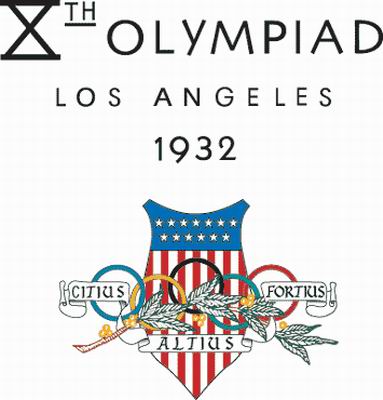 When can China send athletes to the Olympic Games?

When will our athletes get an Olympic gold medal?

When will our country host the Olympic Games?

Every word was shocking, but China, which was poor and weak at the time, could not answer.

The emblem of the 1932 Los Angeles Olympic Games.

It wasn't until 36 years after the birth of the modern Olympic Games that a sudden aggression caused China to intersect with it during the war-torn era.

At that time, Liu Changchun was already a well-known athlete in the Chinese sports world. In the 14th North China Games held in 1929, Liu Changchun, as the Northeastern University team, set the fastest record of 10 seconds 8 per 100 meters.

At the National Games held in Hangzhou in 1930, Liu Changchun ushered in the peak of his personal sports career. He shocked the Chinese sports world by subordinating the 100m, 200m, and 400m champions.

The Hangzhou government at that time also named the road leading to the track and field "Changchun Road" to commemorate and inspire the young man to run to a larger stage.

However, after learning that he was asked to participate in the Olympics on behalf of the puppet Manchukuo, Liu Changchun angrily shouted: "The conscience is still there, and the blood is still flowing. How can you treason and be a man!"

In May 1932, Liu Changchun issued a statement in the "Ta Kung Pao": "I am a descendant of the Chinese nation, and the Chinese will never represent the pseudo-Manchukuo to attend the 10th Olympic Games."

In 1932, "Father of the Chinese Olympics" Wang Zhengting recommended and organized Chinese athlete Liu Changchun to participate in the 10th Summer Olympic Games and put forward the slogan of winning glory for the motherland. Source of pictures from Xinhua News Agency: Xinhuanet

At that time, the Chinese government did not plan to participate in this Olympics due to "insufficient funds". However, due to the concerns of all parties, the Chinese sports organization called the International Olympic Committee to register for Liu Changchun.

The important task of the Chinese for the first time on the Olympic Games has fallen on the 23-year-old.

On July 8, 1932, thousands of farewell crowds were overcrowded at Xinguan Wharf in Shanghai.

On the same day, the Shanghai newspaper published a picture of Guan Yu holding a big knife and riding a small boat, implying that Liu Changchun went to the meeting alone. In the warm applause and cheers of the people, Liu Changchun embarked on the US cruise ship "President Wilson."

The whistle honked and the ship moved off the shore.

In this way, Liu Changchun, the first athlete of the Chinese nation to participate in the Olympic Games, set out for Los Angeles, full of the hopes and expectations of the Chinese people.

From the Nankai playground in 1908, students could only watch the grand event of the London Olympics through slides, to 1932 when Liu Changchun boarded the "President Wilson" cruise to the meeting alone, the outline of the Olympics was more clearly presented to the Chinese people.

China, which has the most population, has become the country with the fewest players. The delegation appeared weak in the Los Angeles Memorial Stadium of Novartis.

So Shen Siliang and Song Junfu decided to invite overseas Chinese and Youth Association officials Liu Xuesong, Shen Guoquan, and Topping from the local area to join the game, barely making up 6 people.

On July 30th, the improvised Chinese team, led by Liu Changchun raised the flag, followed by Shen Siliang as the chief representative, and then represented 4 people, entered the opening ceremony in the eighth order. The stage of the Olympic Games finally welcomed the Chinese for the first time.

On July 30, 1932, the 10th Olympic Games was held in Los Angeles, USA. In this Olympic Games, sprinter Liu Changchun became the first Chinese athlete to participate in the Olympic Games. Source of pictures from Xinhua News Agency: Xinhuanet

However, due to the 22 days of bumps at sea, the lack of suitable training venues, seasickness and vomiting, have greatly reduced Liu Changchun's condition.

In the 100-meter preliminaries held on the second day of the opening ceremony, Liu Changchun, who did not relieve his fatigue, hurried to the starting line.

From the start to 60 meters, the galloping Liu Changchun always took the lead, but as his physical strength dropped, he fell to second place at 70 meters. In the end, Liu Changchun only got fourth and missed the final.

The same is true for the 200m race. Liu Changchun took the lead at the beginning, but was dropped in the end and missed the final again in fourth place.

The loss of the two preliminaries made Liu Changchun feel that the Chinese people have been entrusted, and his feelings of guilt made him depressed after the game.

However, in order to show respect for the Chinese, Liu Changchun was invited by an exception to the championship dinner party organized by the conference. The "zero breakthrough" of the Chinese people participating in the official Olympic Games for the first time has also been recorded in China's Olympic history forever.

It took the Chinese 24 years to answer the first question of the "Three Questions of the Olympics", but it took 76 years for the arrival of the first Olympic gold medal.

On July 29, 1984, at the 23rd Olympic Games in Los Angeles, USA, Xu Haifeng won the gold medal in the men's gun shooting competition with a score of 566, becoming the first Chinese athlete to win the Olympic championship. Source of pictures from Xinhua News Agency: Xinhuanet

Liu Hongtu, the son of Liu Changchun, once recalled: “Father’s wishes are twofold: one is that the Chinese can win the gold medal at the Olympics, and the Chinese flag and national anthem can be spread to the world through the Olympic stadium; the other is that China will one day host the Olympics. ."

And Liu Changchun's first last wish was successfully fulfilled in the second year of his death. The place where China won the first Olympic gold medal was Los Angeles, where he boarded the Olympic venue earlier this year.

In the 1984 Olympics, Xu Haifeng won a precious gold medal in the men's pistol slow-fire competition, making it the world's first to see the five-star red flag rising at the highest point of the Olympic award ceremony.

This shot rewrote China's history of no Olympic champion, and washed away the shame of the "sick man in East Asia" for more than 100 years.

Samaranch, then president of the International Olympic Committee, personally put the gold medal on Xu Haifeng's chest. He said excitedly, "This is a great day in the history of Chinese sports!"

However, the forward pace did not stop. In the same Olympics, the Chinese women's volleyball team led by Lang Ping defeated the host US team in three straight sets in the finals and won China's first three-goal gold medal in the Olympics.

With the 1984 Los Angeles Olympic Games as a milestone, Chinese sports have made more and more determined progress, and more Chinese athletes have begun to emerge and win glory for the country.

On the evening of August 8, 2008, the opening ceremony of the Beijing Olympic Games was grandly opened at the National Stadium ("Bird's Nest"). Photo by China News Agency reporter Mao Jianjun

Until the 2000 Sydney Olympics, China won 80 gold medals and 223 medals in the 5 Olympics in the past 16 years. To achieve remarkable results, at this time, striving to host an Olympic Games has become the common aspiration of all Chinese people.

In 1993, Beijing made its first bid to host the Olympics, but lost to Sydney by 2 votes. Eight years later, as Samaranch himself said "beijing", the 100-year Olympics finally realized China's dream.

From 1908 to 2008, from the "Three Questions of the Olympics" to "Beijing Welcomes You", it took China a whole hundred years to finally be closely linked with the most influential sports event on the planet.

"In the old China, there were domestic and foreign troubles, and the Chinese nation was humiliated everywhere. At that time, I could only watch the flags of foreigners rise at the Olympics, and I couldn't help but shed painful tears."

In November 1979, Liu Changchun felt this way when he learned of the decision of the People’s Republic of China to restore its legal seat in the International Olympic Committee.

Nowadays, generations of Chinese athletes are also adhering to the aspirations of their predecessors, working hard to create Chinese sports one after another. (Author Wang Yu)