Alexander Ovechkin scored a double and scored a pass to Evgeny Kuznetsov in Washington's victorious match against Carolina. Nikita Kucherov showed the same performance and helped Tampa defeat Florida with a score of 5: 0. Andrei Vasilevsky has backed up his claims to the Vezina Trophy with a crack. RT talks about the results of the second day of the NHL exhibition games. 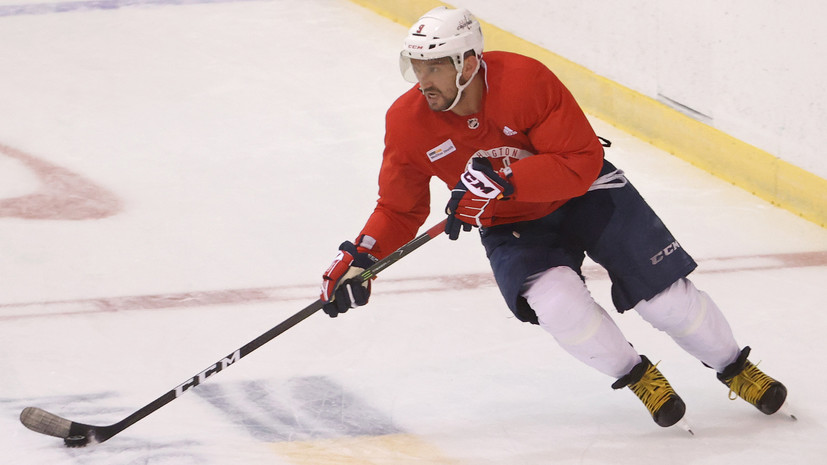 For Washington Capitals striker Alexander Ovechkin, it was as if there was no four-month pause that left the whole world without hockey. He literally single-handedly brought victory over the Caroline Hurricanes in the exhibition match, which ended with a score of 3: 2 in favor of the capital team.

We didn't have to wait long for the owner of the Maurice Richard Trophy to light the siren outside the gates of others. In the seventh minute, Joel Edmundson received a penalty for a foul on Ilya Kovalchuk. Ovechkin first tried to implement a 2-in-1 exit, but hit the crossbar. Then he used his classic throw from the left circle, which did not disappoint him.

The mistake of Braden Holtby, whom Ilya Samsonov will no longer replace due to injury in this playoff, allowed Carolina to equalize after 30 seconds. But the Russian trinity of "Washington" quickly regained the advantage. Dmitry Orlov passed the puck to Ovechkin, who sent Yevgeny Kuznetsov to an empty net. Participants in other exhibition matches could only envy such coordination of actions.

For the season before the break, Ovechkin managed to score 48 goals, and he lacked only two goals until the cherished fifty. It is clear that such friendly games are not counted in statistics, but for the Washington striker, this did not mean anything. He scored his 50th goal in the middle of the match after Tom Wilson's brilliant flank run.

"Carolina" made a lot of efforts to win back. In the last period, she made more shots on Holtby's goal than in the previous two. But the Hurricanes' players managed to excel only with a double majority. Although Andrei Svechnikov finished the match with four shots, there were no effective actions on his account.

The Florida Panthers and Tampa Bay Lightning derby ended with the biggest defeat ever recorded in an exhibition match. Nikita Kucherov's team sent five unanswered goals to the gates of Sergei Bobrovsky, and the Russian striker himself had a hand in three of them.

Florida will soon be fighting the New York Islanders in Stanley Cup qualifiers, but they are clearly not ready for this series. Against the background of Lightning's fast players, their rivals looked more like an AHL team. Unsurprisingly, the account was opened after the Panthers' error. Nikita Kucherov took advantage of Lucas Wallmark's "pass" and helped Braden Point open an account. Five seconds before the end of the first period, the Canadian scored his second goal.

Right after the break, Florida was in the minority. Kucherov arranged a perepasovka with Mikhail Sergachev and finished the rally with a powerful throw. The puck got stuck in the net, and the hockey players could not even immediately understand what happened. Bobrovsky was perplexed and after the next goal by Luke Shenn, whose throw he simply did not see because of his own defenders. Despite the fact that the Russian had already missed the fourth puck, he remained at the gate and experienced another nightmare when Point and Kucherov fled into a counterattack and did not notice three defenders in front of them at once. The Russian scored a double and scored the third point in the match.

In addition to him, Andrei Vasilevsky showed himself brilliantly. It was not easy for the Tampa goalkeeper, except during the counterattack by Alexander Barkov, which he successfully deflected, as well as all the other 25 shots of Florida. Vasilevsky has never missed a goal since he became a contender for the Vezina Trophy.

Panarin's silence and an offensive goal for Shesterkin

Of all the main Russian stars of the NHL, Artemy Panarin has not yet managed to prove himself. In the Rangers and Islanders New York derby, he spent more than 22 minutes on the ice, but did not land a single shot and earned one penalty. His team had not resisted before if the attacker was not playing, and this time it again led to defeat.

It should have been a shame for Igor Shestyorkin too. Throughout the first half of the match, after which he was supposed to give way to Henrik Lundqvist, he diligently repelled the few attacks of the Islanders. When the Swede was already warming up, there was a counter-attack by Anthony Beauvillier, who unexpectedly made an accurate throw for himself.

Vis-a-vis Shesterkin Semyon Varlamov worked his shift perfectly. In two periods, he saved 19 shots and calmly passed the post to Thomas Griss. In the final third Devon Toews and Philip Heathil exchanged goals, and the Islanders won 2-1. None of the Russian field players ever scored points for performance. The Islanders have improved their chances of beating Florida in the play-in by the end of the day, and the Rangers have yet to show how they are going to surprise Carolina.

The return of Tarasenko and the goal of Kulikov

Vladimir Tarasenko was also unable to please the fans, but at least he has some excuses. Unlike most hockey players, he missed not four months, but nine. His St. Louis Blues, as leader of the Western Conference, should have at least fought the Chicago Blackhawks anyway, but instead got four goals in his own net. At the same time, no one in the Stanley Cup winners could answer.

The Winnipeg Jets scored four goals against the Vancouver Canucks. The author of one of them was Dmitry Kulikov. He could only substitute the club after Jack Roslovich's pass behind the back. In defense, the Russian also showed himself well. The Canucks were determined to save the match and made 38 shots on goal, but managed to score only one goal. Connor Hellebike was helped by two Kulikov blocks, without which the goalkeeper would have had an even harder time.

The Colorado Avalanche's meeting with the Minnesota Wild was also not without Russian influence. Vladislav Namestnikov and Nikita Zadorov took part in the attacks of their team, which allowed Colorado to lead the story with a score of 2: 1 by the fifth minute. Although Minnesota later succeeded more in attack, Avalanche retained the winning score.