The picture shows Wu Lei in training. Image source: Visual China   China News Service Client, Beijing, July 6th (Zhang Yifan) It takes about 8 minutes for the sun's rays to reach the earth. It takes 8 minutes to brew the light and heat that it brings to the earth. However, the 8-minute stoppage time did not bring warmth to the Spaniards. 0:1 After losing to Leganes, their hope of relegation sinks... 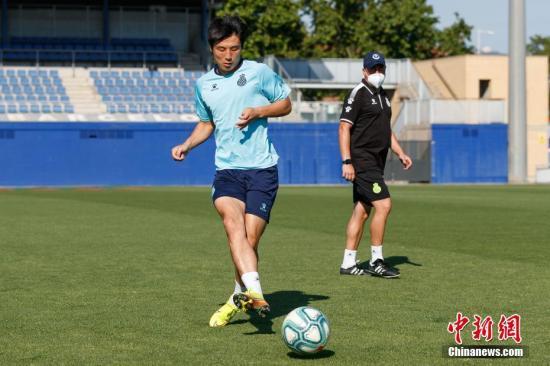 China News Service Client, Beijing, July 6th (Zhang Yifan) It takes about 8 minutes for the sun's rays to reach the earth. It takes 8 minutes to brew the light and heat that it brings to the earth. However, the 8-minute stoppage time did not bring warmth to the Spaniards. 0:1 After losing to Leganes, their hope of relegation sinks into silence like the setting sun.

The relegation of both teams is almost done. Because even if it wins, the Spaniard’s hope of relegation is only "sustainable," and this contest against the penultimate was supposed to be a match for "face". But in 90 minutes, the Parrot Army had no fighting spirit.

The Spaniard had suffered a four-game losing streak in La Liga. If he defeated Leganes in this campaign, he would surpass the opponent to the second-lastest.

Perhaps due to morale, in addition to several attempts to hit the penalty area during the opening stage, Wu Lei spent most of his time defensively and competing for high-altitude balls, tired of running back and forth between the front line and the right. The whole team can't play the rule of law, it seems that it is only lingering in the despair of destiny.

This game can be seen as the epitome of this team throughout the season. After the Spaniard crossed the center line, it was difficult to pass forward. After de Thomas got the ball, he only looked at the individual singles. The ball path of Enbarba was also simple and rude. Dadeer’s forward pass also repeatedly deviated from the goal, which made it better at Wu Lei, who cooperated with his teammates, was very embarrassed.

The teammates who played together seem to have different purposes. As the team's interim coach Rufete said, at present, the team can only listen to the complaints of fans and pray for their forgiveness. In addition, they did not find a way to create miracles.

This season, the Spaniards coach has changed 3 times, next season, the Spaniards will face reconstruction. On the one hand, Wu Lei's position in the Spanish team has become more embarrassing. Whether he will continue to play in the second team with the team or find another league, or return to China, he needs to make a decision after thinking.

In the next round, the Spaniards are about to challenge the powerful Barcelona. If they can't win, they will drop to the West Division B in advance. The latter is at the critical stage of the championship and will not have any pity for opponents in the same city. If the situation does not change, the best Chinese player is approaching the end of La Liga career.

Wu Lei's contract with the Spaniards continues until 2021. Wu Lei said that as long as the Spanish team needs him, he also has the ability to contribute to the team, he is willing to stay in the team. Regardless of the team's ultimate fate, he hopes to fight with the Spaniards.

With the Spanish being relegated by a few percent, Wu Lei's future has become the focus of thousands of Chinese fans.

Wu Lei is not worried about finding his next home. After the long-rumored Wolves, recently, another Premier League team has become Wu Lei's potential new owner. It is the Premier League relegation team Watford. According to the "Daily Mail" report, Watford is now very interested in Wu Lei, they hope to introduce Wu Lei to enhance the team's attack line.

Compared with the Wolves, Watford's lineup is relatively weak, and its competitiveness is not strong. Once Wu Lei joins, it is hopeful that he will get stable playing time in the team. Therefore, compared with Wolves, joining Watford may be a more sensible choice for Wu Lei.

On January 5th, Beijing time, La Liga ushered in the Catalonia derby battle, the Spaniard took home the home draw of Barcelona 2:2. Wu Lei broke the goal in the 88th minute of the game and scored the first goal of the Chinese player against Barcelona, ​​while helping the team to equalize the score. The picture shows that Vargas, who sent the assist, celebrated with the fans on the sidelines after Wu Lei scored to draw Barcelona.

Of course, no matter what team's shirt he wore next season, as long as Wu Lei is still in the Spanish, he should spare no effort to treat every minute. This is not only for the dignity of professional players, but also for their own future. At present, the team has not completely lost hope, and no one should give up in advance.

Since starting his overseas career in 2019, Wu Lei has filled vacancies for Chinese football for many years. He has proved that Chinese players are also capable of playing in the top five leagues. At this slightly helpless time, I hope he can make the right choice for his future. (Finish)